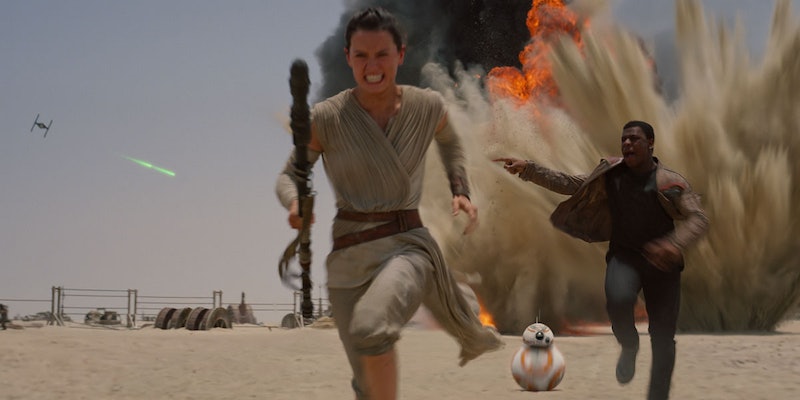 The Star Wars fandom hadsnever truly gone into hibernation, but it has been bursting with new life ever since the announcement of Star Wars: The Force Awakens was followed by casting news, images, and, of course, the numerous Star Wars: The Force Awakens trailers that have been dissected again and again for clues as to what we can expect from the upcoming film. Whether your Star Wars canon includes all of the movies, comics, books, and animated adaptation, or whether your Star Wars canon is only as pure as the first three films to be released, there's no doubt that everyone is curious about this upcoming, and more diverse, space world that we are about to explore. And, with the release of five new Star Wars: The Force Awakens posters out into the fandom, the excitement is reaching a fever pitch — even among the actors.

While the posters were all released by the official Star Wars movie Instagram, the actors also took the opportunity to post their own posters on Twitter and Facebook, including captions that range from simply pleased to be showing off the poster/their character to captions that teased some light spoilers of the film ahead. Check out the posters below.

Kylo Ren is, apparently, here to "finish what you've started," which is as ominous as you might expect from the villain of this piece. A former member of the Knights of Ren, and ally of the First Order, Kylo is going to take down the Jedi come hell or high water — and I don't be a Jedi when he comes for them, sorry.

My boy Finn didn't come with any clues as to what this former First Order Stormtrooper will be doing in the film aside from, you know, battling Kylo Ren in a forest somewhere. John Boyega just seemed thrilled to be able to debut the poster, and who could blame him? The way his lightsaber is reflected in his eyes gives me chills.

My girl Rey (gee, I wonder who my favorite characters in this film are) is a scavenger on Jakku and that, according to her actress Daisy Ridley, is reflected in her poster. According to Ridley, Rey is "looking all freckly from the Jakku sun and as if there's an adventure to be had." I'm not saying she's already my hero, but she's already my hero.

What is there to say about this "scoundrel" returning than "AHHHHHHH?" Han Solo is a man that needs no introduction, and the fact that his more distinguished look, and the numerous heroic and antiheroic adventures he's had over the years in the galaxy, have had no effect on the core of his character is just sensational.

And, finally, saving the best for last, is Carrie Fisher as Princess Leia, the great hero of our generation. Fisher introduced her poster with a quote, "Oh Luke, don’t ask for the moon, we have the force," and I feel like that says enough right there. I did hear somewhere that the force is awakening, after all...

These hints might not be enough to crack the mysteries of the film plot wide open, but they're certainly enough to give fans plenty to talk about while we wait until December 18, 2015.