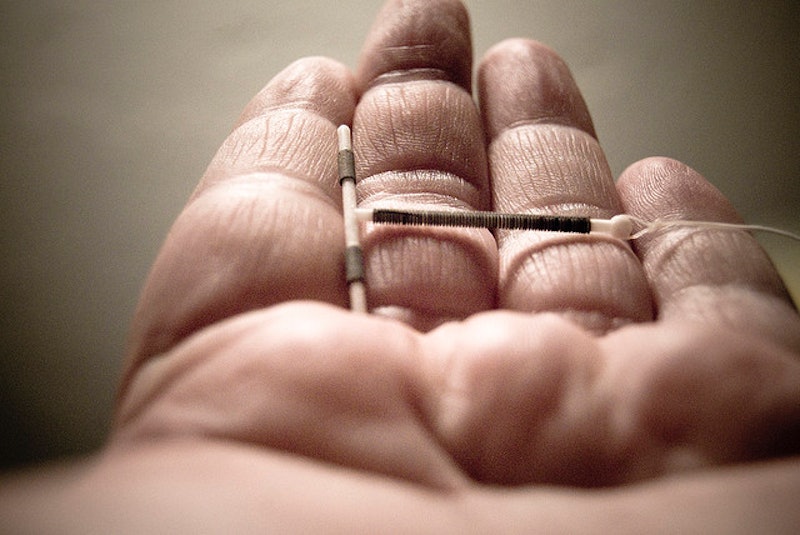 The are some massive advantages to having intrauterine devices, or IUDs, as contraceptives. They can't be felt, they can last up to a decade, they have a 99 percent rate of effectiveness, they can be removed at any time, and they don't create difficulties like "forgetting to take a pill" or "using an expiring condom". There's a reason why they're becoming so phenomenally popular: one study says that 16 times more teenage women would choose IUDs than the Pill, given all the facts and cheap access to getting one. There are, however, steps to being a responsible IUD owner; even the most low-maintenance of contraceptives still involves a bit of foreign matter inserted into your body, and not understanding this can lead to some pretty tricky mistakes.

For a long time, the process behind the original IUD — a copper coil similar to today's Paraguard IUD — and its effectiveness in preventing pregnancy wasn't actually understood. We now think we know what happens, though: the copper gets into the fluids of the cervix and uterus, and prevents fertilization because copper's actually toxic to sperm. The newer version, the hormonal intrauterine system, is a bit simpler: it just futzes with the body's hormonal balance, much like the pill, so that the uterus lining things and cervical mucus thickens, making it really hard for any sperm to get to an egg and make babies. Either way, though, there are potential mistakes in the treatment of your IUD — and it's pretty crucial to make sure you avoid them.

Luckily, it's pretty easy to have a stress-free time with an IUD, as long as you follow the directions. There are just two basic rules: listen to your doctor, and listen to your body.

1. Not Checking On The String After Insertion

It's wham, bam, thank you ma'am, right? Not quite. When you've had your IUD inserted, your clinician should make it really clear that you need to check on the string for the first three months. A lot. The recommendation is once every three days. I know this gets boring, but keep doing it. If you neglect this, you're giving the IUD the chance to do something odd, settle in the wrong place, or generally cause havoc that could be easily fixed by vigilance. Two percent of IUDs fall out, most in the first months of use, so you need to check it.

Doing a check properly is also important. Not disinfecting your hands thoroughly is also a no-no, as is poking around to see if you can feel the IUD itself; you won't. You're just looking for the string, and if you can't feel it, you shouldn't just "wait to see if it comes back" — you need to use another method to protect yourself during sex, and get back to the people who gave it to you ASAP. Hygienic monitoring is important. Also, don't have sex for 24 hours after the insertion, not that you'll feel like it.

After the first three months, you'll want to check the string at least once a month, right after your period. According to Everyday women's Health Center, " After your period (or every month), you can check to see if you are able to feel the strings of the IUD by putting your finger inside to the top of your vagina. If you can’t feel the string, the string feels shorter or longer than the last time you checked, or if you feel any hard plastic, then get your IUD checked by a doctor."

2. Not Knowing The Specifics Of Your IUD Type

There's not just one IUD, there's several. And they do slightly different things to your body and reproductive cycle, so it's valuable to know what's actually going on, as opposed to thinking in general terms. If you know the normal side effects of each type — which are different — you're more likely to know what's abnormal and what's just to be expected.

Hormonal IUDs, depending on type, either give you very short, very light periods, or no periods whatsoever, while copper IUDs may go the opposite way and give you heavier monthly flow and cramps. Plus, they have different effectiveness times as contraceptives: copper IUDs are basically baby-proofing the minute they're put in, while hormonal ones take up to a week to work. You can see why it's important to know the distinction.

3. Attempting To Adjust It Yourself

Oh my god don't do this. If your IUD isn't sitting right, do not shove a finger up there and try to reposition it yourself. You risk making things worse: IUDs can be displaced in many ways, including having an arm slip out of position, having the whole thing rotate or slip, or embedding itself in random bits of the body — including possibly perforating your own uterus (though, it should be noted, this is rare). Your intervention could make a potentially easy situation really, really bad. Do not pass go, do not collect $200, call a doctor and let them handle it.

Also don't try to remove it yourself, either, no matter what you read on the Internet about how "easy" it is: there's a lot of potential for serious injury if you can't see what you're doing (obviously) and aren't trained in removal. It's not like a tampon. When you want it out or it's been 10 years, get it removed by a proper gynecologist, who has all kinds of little tricks to make sure it comes out safely, including an internal camera, cytobrushes, and IUD hooks (don't check pictures of those if you're squeamish).

4. Ignoring Abnormal Pelvic Pain Or Pain When You Pee

IUDs often tend to come with cramps and weird sensations; it's par for the course. But you've got to be on top of your own pain for a bit. Can you still "feel" the IUD in your body? Are things feeling sensitive or enflamed? When you check it after every period — as I know you're now going to do — are you encountering anything unusual in the vagina? Get that sh*t checked out.

I know a lot of this advice boils down to "go to the doctor," but seriously, go to the doctor. IUDs can increase the risk of pelvic inflammatory disease, where the internal genital organs become infected, and it's painful with a host of easily identifiable symptoms. It's easy to treat with antibiotics, but it can be passed onto sexual partners. Hormonal IUDs also raise the risk of benign cysts on the ovaries, which are generally no big deal but can be a real pain in the ass if they burst.

5. Expecting It To Protect You From Every Sex-Related Problem

IUDs do not protect you from sexually transmitted diseases. Hell, they don't protect you 100 percent from getting pregnant. Just like the Pill, all it takes care of is babies; you still have to nab a condom or a dental dam when you're getting down with somebody new. You'll often be required to have an STI test when you get one inserted, to make sure it doesn't cause you to develop an infection from the IUD.

It also doesn't make your vagina a superhero. Although there's some evidence to show that one particular type of hormonal IUD actually lowers your risk of getting pelvic infections longer-term, you've still got to be careful when dealing with it. The earliest IUDs are still associated in peoples' minds with infection, but the ones we've got these days are much safer and cleaner. It may make your cervix more tender, too — so don't charge out bellowing I AM A SENSUAL GODDESS OF THE NIGHT and throw all caution to the wind juuust yet. Let you body have some time to heal after insertion, and only have sex again when you feel ready.

More like this
How To Do The Intimacy-Boosting Lotus Sex Position
By Laken Howard and Lexi Inks
The Best Time To Date After A Breakup, According To Experts
By Bustle Editors
Young People Are Still Experiencing Period Poverty In UK Schools
By Sophie McEvoy
Jennifer Coolidge Got A Lot Of “Action” Thanks To 'American Pie'
By Catharina Cheung
Get Even More From Bustle — Sign Up For The Newsletter