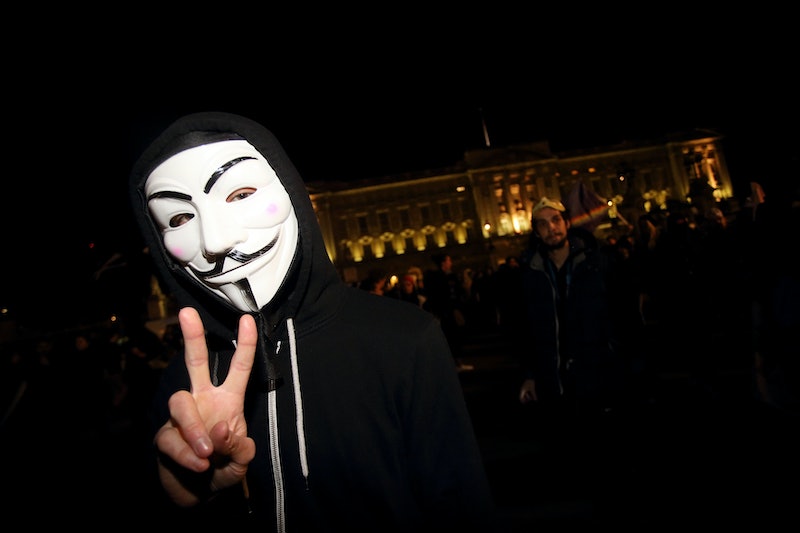 On Thursday, thousands of people will hide their faces to march against capitalism. The Million Mask March, organized by the international hacktivist group Anonymous, will head to 675 cities worldwide to protest government surveillance, police brutality, and capitalism. Protesters will don the now-iconic Guy Fawkes mask, inspired by the 2006 film V For Vendetta and has become the official uniform of Anonymous. But where will the Million Mask March head to? If you wish to participate, the group has provided a world map so you can check to see if the march is going to a city near you.

The first Million Mask March was held on Nov. 5, 2013 as a single protest in Washington D.C. and in just two years has exploded into an international event with hundreds of cities participating. According to its official site, the march has been called the "largest mass protest in human history" and its aim is to "remind the world that fairness, justice, and freedom are more than just words."

This Nov. 5, the march will head to 675 cities (and counting) on what looks like all seven continents — according to the Google Map of all locations, there's even a march happening on Antarctica. The march will take place from 9 a.m. to 5 p.m. local time. Per Anonymous' instructions, demonstrators are to gather at state capitols and city halls in their respective cities and begin marching at rush hour, but each city will have their own specific itinerary.

For example, according to the Facebook page of the Washington D.C. march, protesters will gather at the Washington Monument at 9 a.m., wait for the crowd to assemble until 10:30 a.m., and then proceed to the White House. In London, protesters have been instructed to meet at the Ecuadorian Embassy and to wear "white judicial wigs, black robes, and Anonymous masks."

If you want to join the march and you're not sure if there will be one taking place in your city, Anonymous has created an official Google Map of all locations. Find your city, click on the closest red markers near it, and look up what the agenda is for that particular city through Facebook or Twitter.

The significance of the date — Nov. 5 — also relates to Guy Fawkes, an Englishman who tried to blow up Parliament in the historical Gunpowder Plot on Nov. 5, 1605. The Guy Fawkes mask was first introduced in V For Vendetta, about a freedom fighter who tries to start a revolution against a fictional fascist England. Since then, and especially with Anonymous' adoption of the mask for its own cause, Fawkes' image has become synonymous with anti-government dissent.

Anonymous often aligns itself with movements that challenge the establishment and demand more rights and freedom for the people, such as Occupy Wall Street, Black Lives Matter, and Free Palestine. The Million Mask March D.C. Facebook page lists many of the sayings and causes that Anonymous has been involved in, including "Hands up, don't shoot," Fukushima, and the Second Amendment. If any of these causes are near to your heart, or if you're simply unsatisfied with the current status quo, then you might want to join in the march.