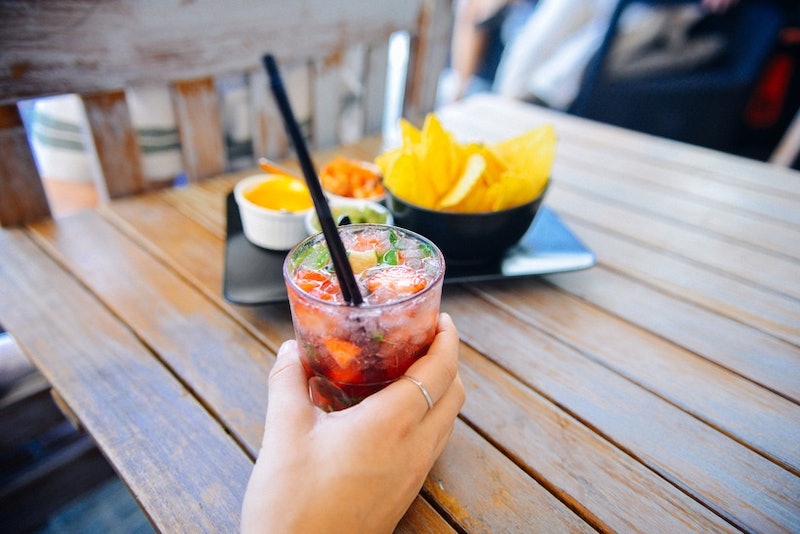 Doing stuff alone, I’ll admit, is scary. Going out alone? Even scarier. The idea of going somewhere without the protection and company of your squad, or at least your mom, is enough to make you want to stay home and watch old episodes of The OC by yourself. But why should you spend your Friday night alone on the couch just because you're single, or because your friends are being lame? Believe it or not, going out alone can actually be really fun.

Last weekend, I went to a nightclub by myself. I was supposed to be meeting someone, but couldn’t find them when I got there, and ended up spending my whole night on the dance floor. I had no phone service, no one to talk to, and no one to dance with. At first, it was a nightmare. But then, I started talking to strangers, which isn’t something I do often. The confidence may have come partly from the fact that I was wearing a Halloween costume, but it was also because my only choices were to go home alone to my empty apartment at 11 p.m., or force myself to try and meet new people. I chose the latter, and it ended up being one of the most fun nights of my life.

According to a study by two marketing experts published by the Washington Post, there is actually little difference in enjoyment when people do activities alone versus when they do them with friends. With that in mind, here are six ways to go out by yourself and still have a blast:

1. Use It As An Excuse To Get Dressed Up (Not That You Need One)

Sure, you look fabulous whether you're wearing your best dress or your older sweatpants and, no, you don't necessarily need a special occasion to dress up. But sometimes we all need an excuse. What better reason to wear your newest outfit (or that outfit that's still in your closet with tags) than going to a bar by yourself? Plus, according to a study by Professor Karen Pine from the University of Hertfordshire, dressing up makes you more confident (no matter what your definition of dressing up is), so it might give you the extra motivation to talk to strangers.

2. Do Something You Love

If you’re the only one in your #squad who likes live jazz music/art galleries/whiskey bars, treat yourself to an afternoon or evening enjoying something alone. If you’re doing something you love, you won’t need a friend to be there with you (especially if they’re going to be bored the whole time). Once you’re there, you’re pretty much guaranteed to find at least a few like-minded people, some of whom are probably also there alone. What better way to start a conversation than over a mutual appreciation of a song/painting/scotch?

Forget all the rules you learned in kindergarten: It's totally OK to talk to strangers. Bartenders, waiters, people at the bar, people in line — strike up a conversation. Most people who are interested in meeting new people, too.

4. Get Off Your Phone

When you’re by yourself, it’s tempting to keep your nose buried in your phone the whole time. A word of advice? Don’t. Take a second to unplug and actually enjoy what you're doing. Constantly texting your friends (who aren't there) will make you miss out on the things going on around you. And what fun is that?

5. Don't Be Afraid To Smile If You Want To

If you're going out by yourself in an effort to meet new friends, then you should know that a study by psychologists at the University of Cardiff in Wales found that smiling makes you more approachable and helps boost your mood. However, if constant smiling isn't your thing or just doesn't make you feel like yourself, then who cares? You're there to have fun, and it doesn't matter whether other people think you are or not. You do you. Also, when you are having fun, you tend to smile naturally so... it's a win, win.

The most (most, most, most) important thing when you’re alone is to be safe. Watch how much you drink, and (as always) never leave your drink unattended. Also be sure to give your friends a heads up of where you’ll be, just in case.

Now go have some fun. Duh.