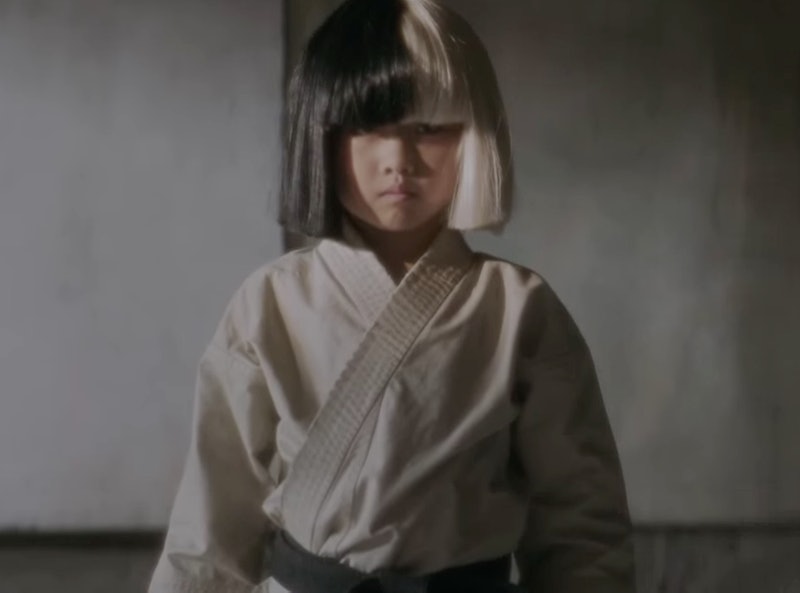 Move over, Maddie Ziegler — Sia's music video family is officially expanding. On Thursday, Sia released the music video for her latest single, "Alive," and if you've already seen it, you've probably noticed that it seems to signal a new era in Sia's creative processes. For one, the Dance Moms star is absent from it. Although Ziegler has become a staple in the cryptic-yet-fascinating genre that the "Chandelier" singer's videos typically fit into, blonde wig and all, in this installment of Sia's genius, things are a little different. Instead, you'll see a different young actor in her place, this time wearing a black and white wig instead. And instead of dancing? She's doing karate through the length of the video, pulling off the adorable but tough thing flawlessly. And now, I know what you're wondering: Who is the little girl in Sia's "Alive" video? It's hard not to want to know more about her after seeing her in action.

First things first: Her name is Mahiro Takano, a 9-year-old Japanese martial artist who just so happened to go viral on YouTube. And being in one of Sia's music videos is impressive enough, but that's not even the most interesting thing about her. In fact, after doing a little digging, I've come to discover that despite the fact that Takano isn't old enough to drive, she could probably kick your butt. And mine.

Takano gained worldwide attention last year when a video of her doing karate moves went viral, garnering almost five million views. According to the video's description, the type of martial arts Takano is doing is called Kankudai, which is rich in "astronomical symbolism" as many of the moves are meant to pay reverence to the sky and the moon. Since then, Takano has gone on to fight with karate champ Rika Usami, who happens to be a full 20 years older than Takano. So yeah, I'd definitely say this says a lot about her talent.

As someone who grew up doing taekwondo, I'm sincerely impressed by Takano's skill. I may have eventually earned a recommended black belt, but my moves were never this precise — not as a teenager and definitely not as a nine-year-old.

And now, for the next most important question: How did Sia find Takano? The singer's rep told Entertainment Weekly that it was just a matter of seeing Takano's viral video and getting in touch. Sounds simple enough!

So if you want to be Sia's next video girl? Do something cool, post it on YouTube, and wait. And it'll probably help if you're pint-sized and ridiculously talented, too.