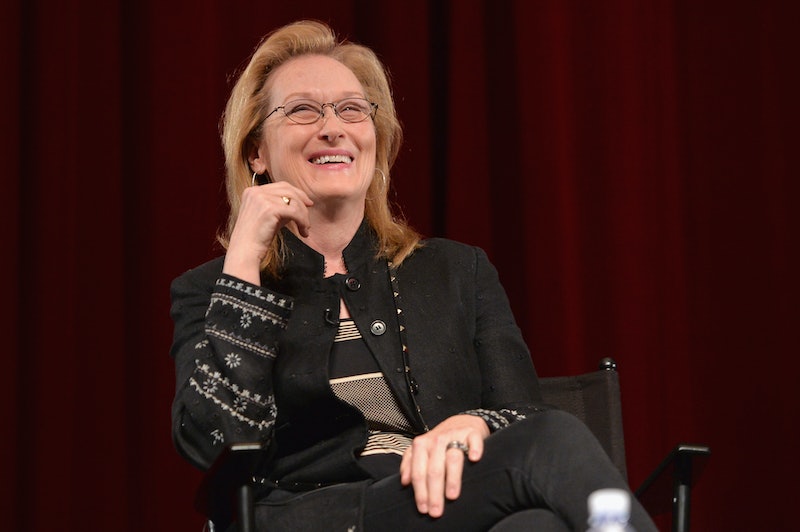 Well our hero and idol Meryl Streep sure knows how to give a compliment — she also knows how to lay down an epic verbal smack down on one of film history's most beloved innovators. At Tuesday night's National Board of Review Awards in New York City, the August: Osage County actress gave a speech to honor Emma Thompson for her role as P.L Travers in Saving Mr. Banks. But for every compliment the award-winning actress gave Thompson, she threw some serious shade at Walt Disney himself by calling him a sexist, anti-Semite and non-lover of everyone's favorite internet furry friends — cats.

From the podium Streep hurtled through some of the darker and more eccentric beliefs and behaviors of the creator of the Happiest Place On Earth and Mickey Mouse. She quoted Ward Kimball, the creator of the Cheshire cat, Jiminy Cricket, and the Mad Hatter, who said of Disney, "he didn't trust women or cats." (What the hell, Walt Disney?) Before launching into a long-winded description of the some of the most eccentric and abrasive artists in the world before arriving at praise of Thompson:

And there is a piece of received wisdom that says that the most creative people are often odd, or irritating, eccentric, damaged, difficult. That along with enormous creativity comes certain deficits in humanity, or decency. We are familiar with this trope in our business. Mozart, Van Gogh, Tarantino, Eminem...Ezra Pound said, 'I have not met anyone worth a damn who was not irascible.' Well, I have—Emma Thompson.

Well, shit, Meryl — you're just throwing shade all over the damn place except for on Emma Thompson, she's getting the brightest beam of your extra-bright Hollywood radiance. I mean, we can't help but agree with her — it's a harsh truth that creativity sometimes comes with a major lacking in other departments of humanity but this is harsh as hell. Streep went further to call Thompson a "saint" before she returned to revealing all of Walt Disney's demons.

She revealed that Disney, the man who brought the joy of animation to billions, supported and anti-Semitic industry lobbying group and there's evidence in the company's policies that he was an extreme sexist. Streep went on to support these claims by reading from a 1938 rejection letter to a female applicant of his animation program, the document read:

Women do not do any of the creative work in connection with preparing the cartoons for the screen, as that task is performed entirely by young men. For this reason, girls are not considered for the training school.

It's no secret that there were few places in the film industry for women in the early part of the 20th century, but this just seems so sad to be coming from the mind of Walt Disney. She finally got to the subject of Saving Mr. Banks, which tells the story of Disney and female author P.L. Traver working together to produce Traver's Mary Poppins.

According to Streep's speech, her knowledge of Walt Disney's true feelings about women really affected how she viewed the film:

When I saw the film, I could just imagine Walt Disney's chagrin at having to cultivate P.L. Travers' favor for the 20 years that it took to secure the rights to her work. It must have killed him to encounter a woman, an equally disdainful and superior creature, a person dismissive of his own considerable gifts and prodigious output and imagination.

Finally, her long but highly informative tirade about Walt Disney's transgressions to humanity and cats ended. Streep then pushed onward — reminiscent of those August: Osage County monologues — to say some beautifully kind words about the recipient of the award she was presenting.

I'm talking about her relentlessness when she has her verbal dim sum, and then it moves to the relaxation of her brow, when she retreats into the past. It's her stillness. Her attentiveness to her younger self. Her perfect alive-ness. Her girlish alertness. These are qualities that Emma has, as a person. She has real access to her own tenderness, and it's one of the most disarming things about her.

Talk about taking us to the ends of the earth and closing out on a high note. I think we should just let Meryl give everyone's acceptance speeches this awards season because now we know that she'll be honest as hell and treat each one like a mini-performance.

All hail our hero, idol, and now champion of women and felines — Meryl Streep.