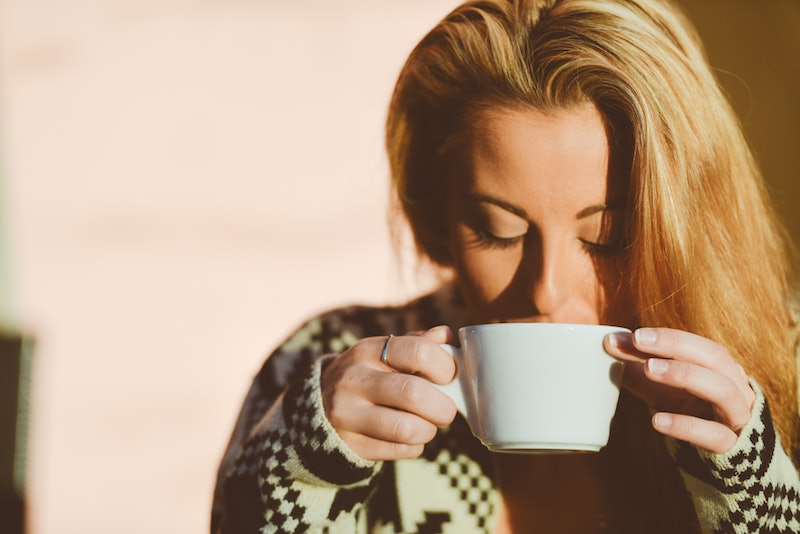 The season of hibernation is upon us. It's about time we give into it. At first, we'll use the excuse of holidays and family obligations to brush off invites to hang out, but once December passes, we have to face the truth: it's just too cold to venture out. (And if last winter is any indication, blizzards love to hit at the most inopportune times.) Winter is the season of solitude and enjoying some much needed alone time. It is the time of year when it's perfectly acceptable to huddle under the covers with a huge cup of tea (or your libation of choice) and give into your impulse to binge watch that show you've been putting off for years. (The Sopranos, anyone?) After all, nothing feels as good as does cancelled plans.

I love a good Netflix session, but curling up with a book feels more productive. It's the perfect chance to read that book that has been haunting your nightstand for ages, but you've just needed a good excuse to start it. With your weekend calendar claimed by your bed, why not start now? Here's a list to inspire your winter reading choices. Your friends will forgive you; they're probably in bed with some of the same books!

1. The Folded Clock by Heidi Julavits

Unlike any memoir you've read before, Heidi Julavits patches together two years worth of diary entries, each beginning with "Today..." With the order jumbled, she illustrates how our lives have particular themes that cycle in and out of our daily routine. Who knows? Julavits' could spark your own return to journaling, just in time for your New Year's resolutions.

2. Everything I Never Told You by Celeste Ng

“Lydia is dead. But they don’t know this yet.” So begins Celeste Ng's gripping family drama, making it nearly impossible to put down. Elegantly exploring the complications of race in small town America, the story of the Lee family is filled with mystery and familiar quiet moments of familial strife and love. You may need to venture outside after this one, or at least pick up the phone, to discuss it with your friends or to convince them to read it ASAP.

While not as recently published as the other books on this list, Edwidge Danticat's memoir recounting her uncle's life in Haiti and the tragic turn of events that left him at the mercy of Immigrations and Customs Enforcement is very relevant with our current political climate. She reminds us of the people behind the numbers of undocumented immigrants and asylum seekers: each has their own unique and important story to tell.

4. The Most of Nora Ephron

Nora Ephron's films like Sleepless in Seattle and When Harry Met Sally fit perfectly with the holidays, and the same is true of her writing. Released posthumously, The Most of Nora Ephron collects her writing over the years, from her hilarious essays and blog posts to the scripts of her play Lucky Guy and When Harry Met Sally. Make it the season of Ephron and hibernation and spread out your time with this collection through the whole long winter.

Fairytales aren't just for Disney movies, where the complexities of the narrative are often toned down or erased. Based on Snow White, Helen Oyeyemi weaves together a startling dark and ultimately redemptive modern fairytale that examines issues of race, class, and gender. While Boy initially embodies the princess archetype, her character arc illustrates the relativity of labeling someone "good" or "bad," restoring much needed nuance.

6. The Argonauts by Maggie Nelson

A work of critical theory on gender and meditation on family and motherhood, Maggie Nelson may have crafted one of the very best love stories, made all the better because it's true! While some of the book can be intimidating with Nelson's references to literary theorists, don't let that stop you. The Argonauts is a slim book that will consume you and make you a believer in the power of love.

7. A Brief History of Seven Killings by Marlon James

A recent winner of the Man Booker Prize, Marlon James' novel examines the ramifications of an attempted assassination of Bob Marley in Jamaica in the 1970s. Already being heralded as a new classic, A Brief History of Seven Killings provides a glimpse into the impacts of poverty and violence on a society. At a weighty 700 pages, this winter provides the perfect time to dive in during a long weekend.

8. The Unspeakable: And Other Subjects of Discussion by Meghan Daum

The holidays can be a difficult time for many, and sometimes it is important to be reminded that you aren't alone in dealing with a difficult family member. Meghan Daum opens her powerful essay collection with a meditation on her mother and her last days in "Matricide." With Daum at the helm, entering and confronting the dark places of our experience isn't as frightening as it could be.

9. Re Jane by Patricia Park

While the winter can be a fun time to dust off our favorite classics, why not try something new, yet familiar? Re Jane takes the tale of Jane Eyre and replaces the English countryside with Flushing, Queens, centering on Jane Re and her time as an au-pair for the Mazer-Farleys, a Brooklynite family.

10. My Brilliant Friend by Elena Ferrante

Elena Ferrante's Neapolitan Novels have been all the rage this year, and once you begin My Brilliant Friend, it's not difficult to understand why. The fraught and all-consuming friendship between Elena and Lila will similarly consume your weekends as your race through the quartet of novels.

Fight Club meets feminism in Sarai Walker's debut novel, which centers on Plum Kettle, who joins a secretive society of women committed to justice, just as a rise of vigilantes take down men who have committed heinous crimes against women. Settle in for staying up all night with this one; you won't be able to put it down once you begin.