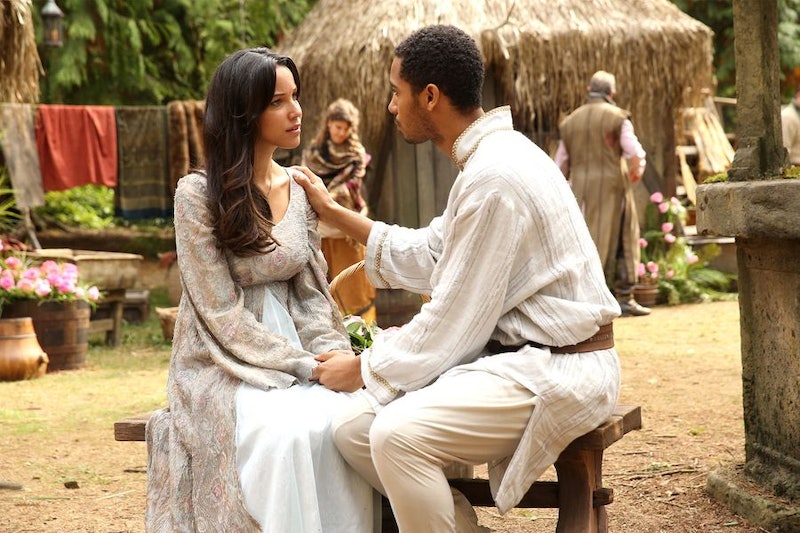 Shakespeare once wrote that "The course of true love never did run smooth," a sentiment that could not be more prevalent for the characters of Once Upon a Time. But while many have each had their fair share of romantic ups and downs, I have a feeling that no couple will be able to compare with the tragic love story surrounding Merlin and Nimue. In fact, just a few episodes ago we saw Merlin shed a tear over his great lost love in front of the Original Dark One, which ultimately led to him getting trapped inside of a tree. (Seriously, worst break-up ever, you guys. Perhaps he was just getting too "sappy.") But tree puns aside, I'm starting to wonder if this could indicate that Nimue is actually the Original Dark One on OUAT .

In case you're a bit unfamiliar with the name Nimue, here's a bit of a refresher: she's also known more commonly in fairytale circles as the Lady of the Lake, who (according to legend) won over Merlin's heart right before trapping him inside of a tree. Sound familiar? Granted, this show is known for taking a few liberties when it comes to these well known storylines, but that doesn't necessarily mean it'll stray in such a big way. If the Lady of the Lake originally entrapped Merlin in a tree, then there's a good chance that its OUAT counterpart will end up reflecting that same concept. And since we all saw the Original Dark One perform the deed, then it's not too far of a reach to think that it was Nimue hiding underneath that mask.

It would certainly help to explain why Merlin was so upset in that flashback. At first, I mistook his tears to mean that Nimue had died and he was devastated by grief. But what if that grief wasn't because he lost her to death, but rather to darkness? What if something happened to made her become the very first Dark One ever created? That would certainly be something worth sobbing over, and part of the description for Sunday night's episode "Nimue," seems to only help cement my suspicions.

"Merlin brings Emma along on a journey to confront his ancient nemesis and retrieve the sacred spark he’ll need to reforge Excalibur. Both parties are tested, but one suffers a blow that could derail the entire operation. In a flashback to long before the Age of Arthur, young Merlin finds purpose after he is blessed with magic and immortality, but when he falls in love with a young refugee named Nimue, everything changes for Merlin, as their romance starts a chain of events that touches every one of our present day heroes."

That last part feels particularly ominous. How could their romance impact everyone in Storybrooke? Maybe because their relationship is what sparked the beginning of the Dark One curse, and we all know how much that sinister creation has impacted these beloved characters throughout the years. And why would "Merlin's voicemail" tell the gang that Nimue was their only hope in banishing the darkness if she wasn't somehow connected to it in a major way?

Rumple has always reminded us that "all magic comes with a price." What if that all started with Merlin? By achieving immortality and the ability to use magic, he ended up losing the person most nearest and dearest to his heart. Now that would be a tragic love story for the ages.