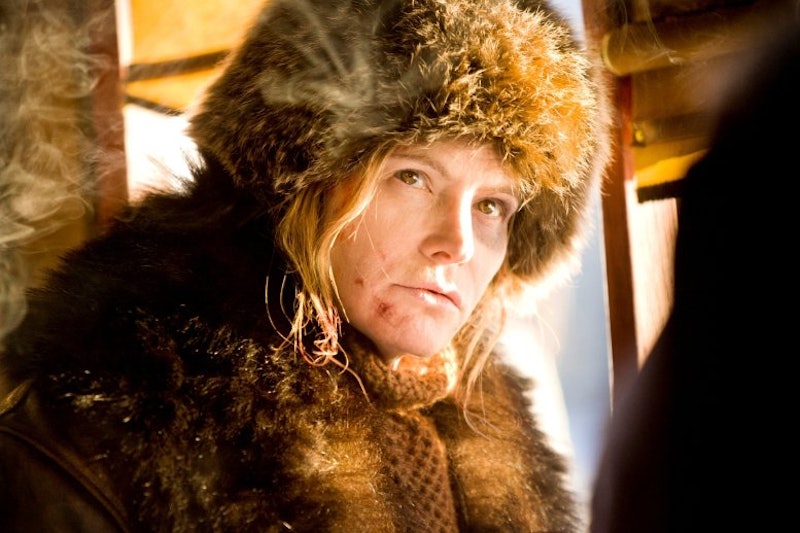 The first trailer for the new Quentin Tarantino movie The Hateful Eight introduced the intrigue, the setting, and each of the titular "eight." Now, a second Hateful Eight trailer leaves us with far more questions than the first one answered. You know this is how you want to spend your Christmas — if you didn't spend Christmas 2012 with Django Unchained, you weren't doing the holiday season right.

As Jennifer Jason Leigh, one of those eight, told Interview Magazine, "So much of the joy of seeing Quentin's movies is just how explosively imaginative they are, and how you don't really know where things are going, and you don't really know who's who and what's what and what the truth is." The movie has been kept surprisingly close to the chest, considering that the script leaked early last year. This means that each successive trailer gives us a little more context, and also builds up a bit more mystery. Like Tarantino's best work, it pulls from genre conventions (here, the Western is probably most present), but it's not really clear where the movie will go.

These questions, of course, assume you never read that leaked script that made Tarantino swear he'd never make this movie. (Let's forget about that. Move on, shall we? I can't bear the thought of this movie not happening.) Check out the trailer below, and see if you have any answers to the six most burning questions the new teaser leaves unanswered.

1. Are There Any Good Guys Here?

I can probably answer this for myself. The movie is called The Hateful Eight, after all. It's unlikely that any among the eight are actually the heroes of this story. Even the Sheriff isn't quite what he appears, and the "Little Man" is actually a hangman himself.

2. How Did Two Bounty Hunters Come To Be Working Together?

The Hangman — Kurt Russell — and the Bounty Hunter — Samuel L. Jackson — seem to join together in the effort to transport their Prisoner (Jennifer Jason Leigh). But she's the Hangman's prisoner, so what does a fellow bounty hunter bring to the table?

3. What Did The Prisoner Do?

Daisy Domergue must have committed quite a crime to have a $10,000 bounty on her head, dead or alive. How did she get mixed up with the sketchy characters at Minnie's Haberdashery?

4. Which One Of These Is Not Like The Other?

According to both trailers, one of the men — or maybe the woman? — is not who he, or she, says he is. This has the potential to be a 19th-century Reservoir Dogs, where half the narrative is occupied trying to figure out who the mole is. Who's going to lose his ear this time?

5. Where Is The Real Proprietor Of Minnie's Haberdashery?

The Mexican (Demian Bichir) cares for the premises while Minnie is visiting her mother, according to the synopsis on Indie Wire. Is she really off on a social call? Would the proprietress of the haberdashery leave her premises in such uncertain hands, or is something more sinister going on?

6. Will Anyone Make It To Red Rock Alive?

The purported destination, at least for Hangman, Bounty Hunter, Prisoner, and Little Man, is a town where Daisy will meet the noose. She seems remarkably good humored about it, playing along with a self-mocking hanging gesture when the Hangman explains to the other men at the haberdashery his intentions. But between the torrential blizzard that has blocked the route and the uncertain intentions of the residents of the haberdashery, it's not clear that anyone is going to be getting out of here intact. Or alive.

Even if you read the script back when it went online last year, Tarantino has gone to great lengths since then to ensure that the result is a total surprise. He rewrote the ending, according to Cinema Blend, and the cast has been notoriously tight-lipped about how The Hateful Eight plays out. But come Christmas, all bets are off, and I will be celebrating my holidays in bloody style.