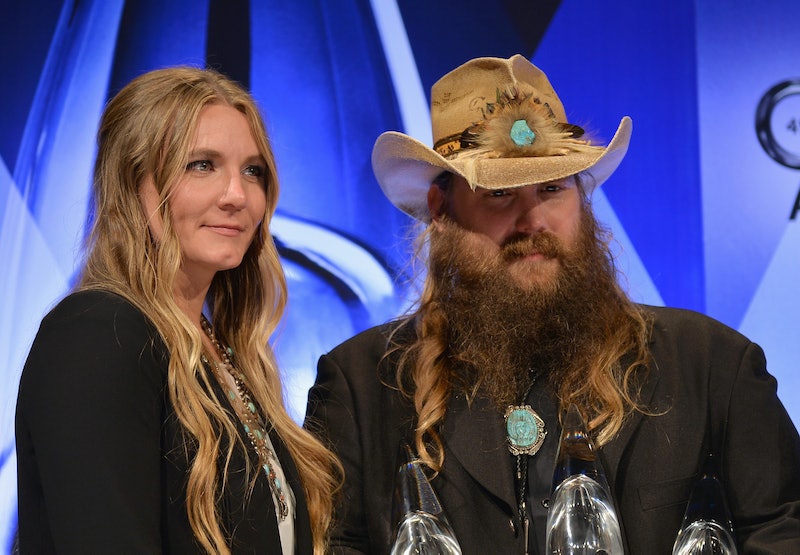 At the Country Music Association Awards on Wednesday, Nov. 4, Justin Timberlake showed up for a soulful, country-crossover with Chris Stapleton, performing Stapleton's massive hit "Tennessee Whiskey" and Timberlake's "Drink You Away." You might already know the country crooner, but if you don't, you're about to. The 37-year-old singer has a lot of impressive songwriting credits to his name, penning hits for country greats like Darius Rucker and George Strait. At the CMAs, though, it was his turn in the spotlight. He took home trophies for Album of the Year for Traveller, Male Vocalist of the Year, and New Artist of the Year. And he had his beautiful and supportive wife, Morgane Stapleton, by his side.

Chris and Morgane have been married for eight years, and they are more than just romantic partners; they're musical partners, as well. Morgane joined her husband on-stage Wednesday night to provide back-up vocals for his duet with Timberlake, and she's also featured doing harmony on his album. She's been by his side, and his muse, for much of his career.

Read on to get to know Morgane a little better and see how her career is taking off, too.

She & Chris Met Through Music

Chris and Morgane met through — what else? — the music scene about 12 years ago. Speaking to the Washington Post about how she first met Chris, Morgane admitted that she had a crush on him, largely for his talents. They met at the legendary Sea Gayle Music publishing company in Nashville, and their first date involved writing a song — or trying to. Morgane said of the beginnings of their relationship,

We’d hear the jingle of his keys as he walked down the hall, and we knew he was coming to play us whatever new song he had written. Eventually he asked me to write a song with him, and that ended up being our first date. We didn’t get much writing done that night.

Morgane is just as prolific a songwriter as her husband. She's written for country stars like Carrie Underwood, for whom she wrote "Don't Forget To Remember Me" and also provided vocals on the track. She also wrote "You Ain't Right" for LeAnn Rimes.

In an interview with The Washington Post, Chris said that when it comes to putting albums together, he needs his wife's help 110 percent: "My wife has great taste in everything but men. The vast majority of the songs on my debut album, Traveller, came from lists she made."

She Inspired His Album

Chris' album Traveller is about the death of his late father, who was a coal miner and country music lover and a big influence in Chris' life. When he passed away in 2013, Morgane knew that her husband needed something to distract him and help him cope, so it was her idea to buy a 1997 Jeep Cherokee and take a cross-country road trip with her husband to inspire him. They flew to Phoenix and planned to drive the Jeep back to Nashville. Morgane spoke to The Tennessean about how their trip got off to a shaky start:

We looked at each other like, "Yeah, we're finally doing this," and then gas started spewing everywhere. We called the seller and he said, "Oh, you can't fill (the tank) all the way."

But they made it, and along the way, Traveller was born.

She Sings With Chris

Did you see Morgane on-stage at the CMAs? She joined her husband and Timberlake for their performance. She also sings harmony on Traveller, her husband's now award-winning album.

They Have Two Children Together

Somehow, the couple manages to find time for family. The pair live and work with their two children in Nashville, Tennessee. Where else? That's where their home and heart is.