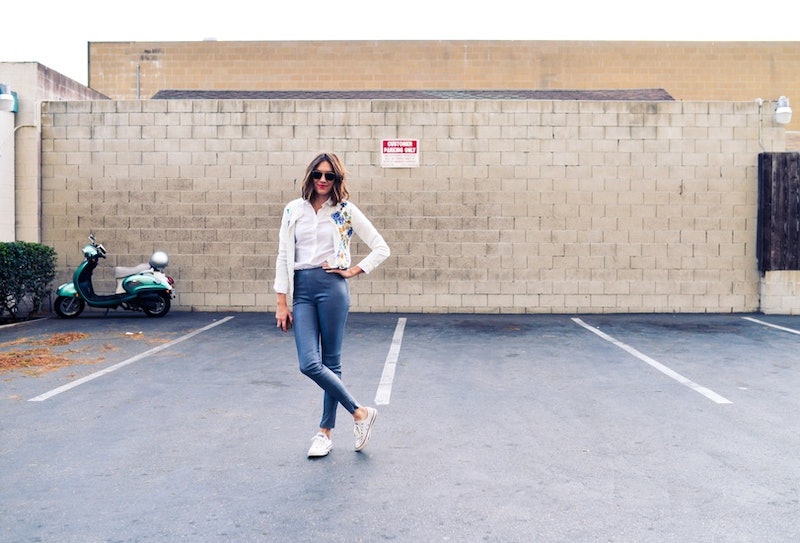 The last thing anyone ever wants to feel about themselves is that they are being walked all over. Learning how to stick up for yourself can sometimes be difficult, though — especially as women, when we have to be that much more assertive to be heard and taken seriously. While we are still dealing with this unfortunate gender inequality in today's society, that shouldn't stop you from sticking up for yourself and getting what you want.

Personally, I've always had a hard time with this, and especially in high school. I didn't feel comfortable in my skin, and I never wanted to disappoint anybody by saying the word "no" or being considered selfish. Everyone always called me sweet, but sometimes, I would just feel like I was a carpet that was being walked on. As I grew up, I started to realize that it was OK to not agree with everything. That it was OK to say no, and that it was OK to be assertive. You have to put your foot down when you don't feel comfortable about something. With that in mind, I have been trying to stand up for myself in more ways than one and I hope these tips helps out anybody that is also having trouble with this.

1. Don't Be Afraid Of The Negative

The one thing that could make you not want to stand up for yourself is essentially the fear of what the outcome could be. Whether this pertains to a job, a friend, or your SO, you have to realize that the negative is not as bad as you think. Someone has most likely been in your spot before, and if you strongly believe what you are standing up for, then why you would let something else control that?

I always had a hard time with this one, especially when it came to my career. Obviously, always saying yes in the workplace can be a good idea — but there's a difference between that and being taken advantage of. After some time, you can start to notice the difference when the person doesn't have your well-being or concern on their mind. When I noticed and I started to say "no" to certain things, it actually made them respect me more as an employee and considered my time more wisely. In addition, it also made me feel more confident about my choices and who I was.

2. Don't Be Afraid To Speak Up And Speak Clearly

This is a great way to get the ball rolling on your confidence and how you want others to treat you, because essentially, this is what this whole thing is about. Standing up for yourself includes speaking your mind. For the introvert (hello!), that could be a hard task to follow, but it's an important one. When you speak clearly and state exactly what you want, you are not allowing that other person to push you around.

According to an Everyday Health article, Susan Zeidman, who oversees assertiveness training for the American Management Association, based in New York City said, "People who avoid confrontation are more passive in their approach to things — hoping the problem will go away or that they won’t have to say something." Being passive aggressive is just going to give you more stress, because the problem you had was not resolved and is just not healthy.

Your body language, believe it or not, says a lot more than you realize. But another good reason why you need to stand up straight is because it literally changes your hormones and makes you more powerful. According to a Fast Company article that referenced a study by researchers from Columbia and Harvard Universities, individuals who were in power poses "not only felt more powerful and in control, but were 45 percent more likely to take a risky bet." The study went on to say that, "...Expansive postures actually altered the participants’ hormone levels—decreasing cortisol (C) and increasing testosterone (T)." So basically, science just told you to man up.

4. It's OK To Say No And Be Assertive

It really is. It might feel like you are taking a big risk, but it's never as scary as you think. The word "no" is more powerful than you think, and you will actually get further in life by using it. According to a Fortune article, Camille Preston, founder and CEO of AIM Leadership, said, "In order to reach your goals you have to build some fences to guard and protect yourself so you can grow. This means discriminating between the things that help you get there and the things that don’t. Learn to say no to the people, situations, and commitments that do not move you toward your goal, that distract you, or that you simply do not enjoy. "

Hello, self-confidence! No one is going to push you harder or believe in you more than yourself and for you to say what you want without hesitation, is simply, for you to believe the words that are coming out of your mouth. If you're not sure how to do this, maybe you need to have a conversation with yourself. According to an Entrepreneur article written by Matt Mayberry, a Speaker and Maximum Performance Strategist, the best way to believe in yourself is to internationally talk to yourself like a champion. "Just for one week, try talking to yourself like a champion instead of listening to yourself as a victim. I guarantee that you will be blown away by the results," Mayberry said.

6. Don't View Yourself As a Victim

Once you start viewing yourself as a victim, then you will always start viewing yourself that way. When you do this, you are creating yourself to not only be the victim but your own worst enemy, too. It's just not healthy. According to a Psychology Today article, Judith Orloff, M.D. an assistant clinical professor of psychiatry at UCLA said, "Whether you’re confronting a drainer or transforming your own negativity, being empathic is vital. Elevating you to the realm of the heart, empathy allows you to non-defensively understand, even have mercy on antagonizers." While it's good to have empathy for others, it's best to also have empathy for yourself.

Want to become better at standing up for yourself? Practice makes perfect. The best way to get better at something is to repeat it over and over again. Soon, you will start seeing the results and become less afraid of the possibilities of what might happen.

Don't be afraid to stand up for yourself. You are a warrior and you deserve for others to treat you the way you want to be treated. The best way to do this is to simply just begin. Once you get used to standing up straight and saying no to things you don't stand by, you will start to feel confidence in yourself in no time!