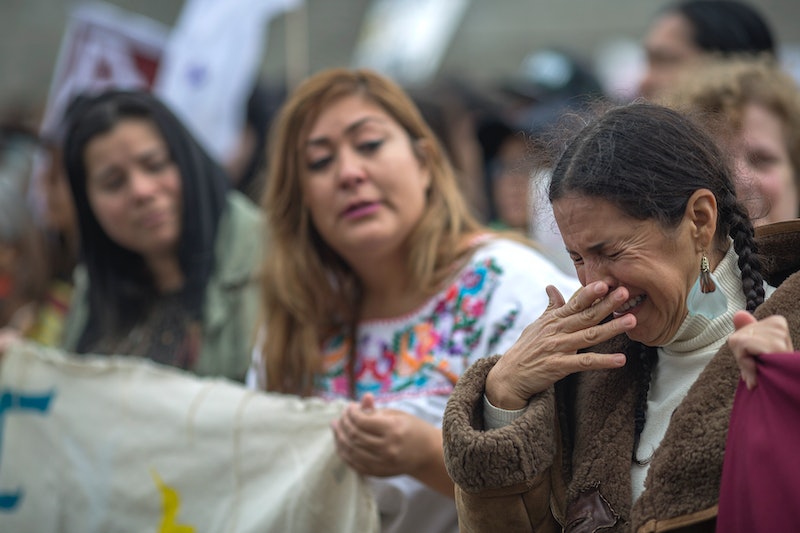 I cried when I read this*: Apparently, women are judged negatively whether they show emotion or don't show "enough" emotion, according to recent research. Yet again, we can't win!

Here's what we know: According to a recent study, women who show anger are perceived as less trustworthy, while men who show anger are percieved as more trustworthy. But a newer study, which was conducted by researchers at Humboldt University in Berlin and published in the journal Emotion, found that if women restrain their emotions they are perceived as less intelligent and emotionally competent — whereas men who restrain their emotions are seen as more intelligent and emotionally competent. How did they test for this? Apparently, they showed participants in the study emotionally upsetting images; then they showed them videos of men and women either reacting emotionally immediately to the photos, or having a "thoughtful" delay of 1.5 seconds before reacting emotionally. The participants then had to rate the people in the videos on intelligence, emotional competence, sensitivity, caring, and authenticity.

The reason why women with the thoughtful pause were punished more than the men with the same pause may be because we see women who restrain their emotions as fake, the researchers said. Why do we see them as such? It all comes down to "gender stereotypes about women as more emotionally volatile, but also more emotionally competent." Because of these stereotypes, holding off on an emotional reaction "may be seen as strategic rather than spontaneous," the researchers wrote.

This makes me (insert 1.5 second delay here) SO MAD, because the implications of this kind of test are enormous. Imagine a rape survivor testifying against her rapist and being judged whether she's in tears, or whether stoically trying to hold it together. Think of Leah Remini, who is right now in some gross pockets of social media being dismissed as an attention whore for being angry about her years in Scientology. Think of Hillary Clinton, who is so often accused of being cold or inauthentic when this is a charge that could be leveled at literally every single politician, because seriously, you think Marco Rubio has real emotions, people? Think of promotions at work, new opportunities, and important responsibilities being passed onto a man instead of a woman, all because a woman didn't show her emotions in the "right" way.

So what is that "right" way, anyway? Can someone tell me how I'm supposed to react when I see something sad or something that's unfair? Because right now, it seems like there are no options. At all

*I didn't really cry, but if I did, what would your reaction have been?