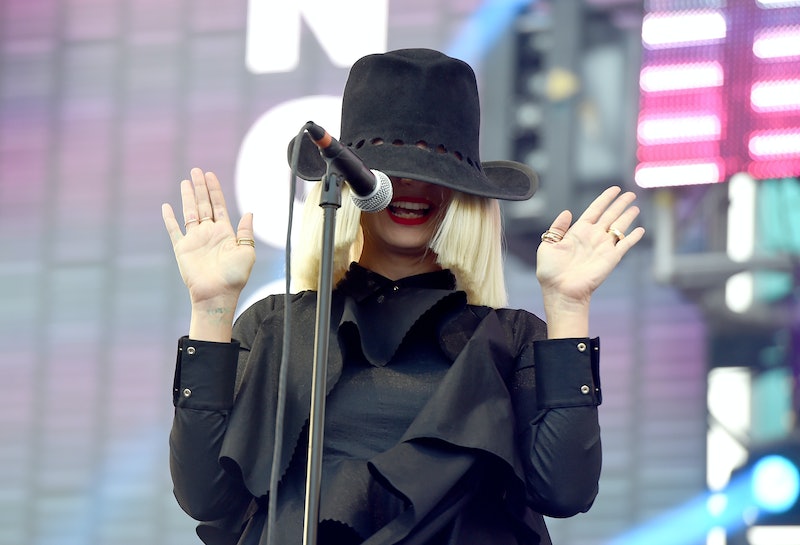 As most New York residents know, the Empire State Building's lights frequently change color to reflect the mood or holiday of a particular moment. Over Hannukah last year, they shone blue and white; when the Supreme Court ruled in support of gay marriage, they flared all the colors of the rainbow; and on August 1, endangered animals paraded along its façade. For the first time, the building was the backdrop, rather than the source, for a light show, depicting a slew of endangered species crawling, floating, and soaring over its walls. The light show was recorded, and it's now the visual accompaniment to a new Sia song called "One Candle," which premiered on Rolling Stone earlier today.

The song is actually part of a soundtrack by J. Ralph, the songwriter-producer-social activist who also wrote the soundtrack for Virunga and Man on Wire, for the new documentary Racing Extinction. Directed by Louie Psihoyos, the man behind the dolphin documentary-cum-thriller The Cove, Racing Extinction has a similarly explicit environmentalist bent. It packs eco-heists and exposés one on top of the next into its hour-and-a-half-long run time, moving from the sea to the jungles to restaurants illegally selling whale meat.

Sia joins Antony (of Antony and the Johnsons fame) on the soundtrack, and both have new videos out now. "Both songs are essential to the film's narrative and integral to the awareness campaign worldwide," J. Ralph told Rolling Stone in the same article. Sia isn't a newcomer to activism — a vocal vegan, she also participated in a PETA campaign in support of neutering and spaying pets. Has she now turned into an environmentalist with "One Candle"? Let's take a little read into the lyrics and see how much "One Candle" might reflect the narrative of Racing Extinction.

As the video starts to play and the first chords creep in, the title cards list off statistics about the status of endangered species worldwide. "In 100 years, 50 percent of all species could be gone," it says. It sets the scene at the Empire State Building, where Cecil the Lion was among the animals honored in the light show. The animals' movements were choreographed in synchronization with the song, and as the beat sets in it's clear this is trademark Sia — immediately danceable, but sparse and with an edge of '80s power-ballad. Then she starts singing.

"Mountains, maybe we can move them" doesn't sound incredibly good for the environment — that is not how we'll reduce our carbon footprint. But perhaps she means it the metaphorical way, overcoming great obstacles and the like. That makes more sense, given the next line: "Come now together we can do this." In context, she must be talking about saving the animals.

Almost immediately, the song's tone shifts and the chorus starts to build.

Together we canTake my hand

Racing Extinction spends a lot of time with eco-activist groups, proving that they have the greatest impact when groups come together to provoke change. Maybe Sia is also considering a sting operation blowing the lid off illegal shark oil rings.

Together we canLight our candles and standThose that came before man

Musically and lyrically, the chorus is the songwriting equivalent of breaking out a lighter during a power ballad at a U2 show. Sia is not coy about these lyrics — when she says "Those that came before man," she seems to literally mean the animals flashing across the face of the Empire State Building. She proceeds to murmur "and curse the darkness" several times before moving into the second verse. Essentially, the point appears to be to shed light on the injustices perpetrated against those who don't have a voice. It's worth pointing out this applies equally well to social as well as environmental injustices.

Well, yes, it's hard to put the point more plainly than that. Though the lyrics might be a little heavy-handed, they're purposeful and direct — perfectly suited to the short event that was the Empire State Building screening, and even better matched to the documentary.

"One Candle" contrasts with the often obscure lyrics Antony is known for, and the staid piano line that his lyrics accompany in "Manta Ray." It's easy to envision a Sia video that takes the form of an environmentalist Bling Ring, a fabulous covert operations in which she swings in to save the day. With "One Candle" as a statement of intent, I'll be waiting for Sia to turn eco-activist.