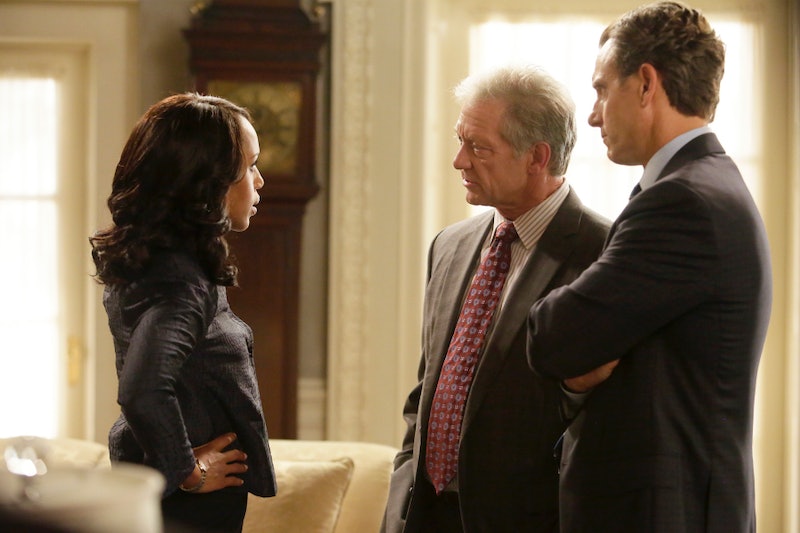 Things are changing in the fictional White House, y'all... and it's Olivia Pope who's going to change them. She's always had a hand in what goes on in the oval office more than your average citizen, partially because of her political savvy and partially because of her tangled relationship with Fitz. But now? She's got more power than ever. As Cyrus very devilishly pointed out to her on Thursday's new episode, Olivia's basically the president now that her relationship with Fitz isn't just behind closed doors anymore, and now, she gets to call the shots. And really, who better for the job?

And it's not like she hasn't been doing this all along. In fact, Elizabeth North made a reappearance, and it's all because of Liv that she got to stay. At Olivia's insistence, Lizzie is now Susan Ross' Chief of Staff (and getting busy with David, but that's another story for another time), effectively bringing her back into the White House where she belongs. But now that Olivia's been made aware of the power she wields, it seems like she's going to be a little less interested in keeping up with Pope & Associates and dedicate herself to pulling Fitz's puppet strings at every opportunity.

Not that she doesn't deserve it, because Olivia Pope is a genius and she probably should be running the country.

But anyway. The end of this week's episode gave us just a quick preview of what it's going to be like to have Olivia taking the reigns, and man, was Cyrus ever right. Fitz is not hesitating even a little about taking Olivia's advice, even though he's been president for two terms (aka two terms longer than she has). I mean, like I said before, she's right... but Fitz must be so blinded by his own happiness that he doesn't mind letting her essentially do his job for him.

Here's an idea: Mellie/Olivia 2016. Can we make this happen, Scandal? Please say yes.