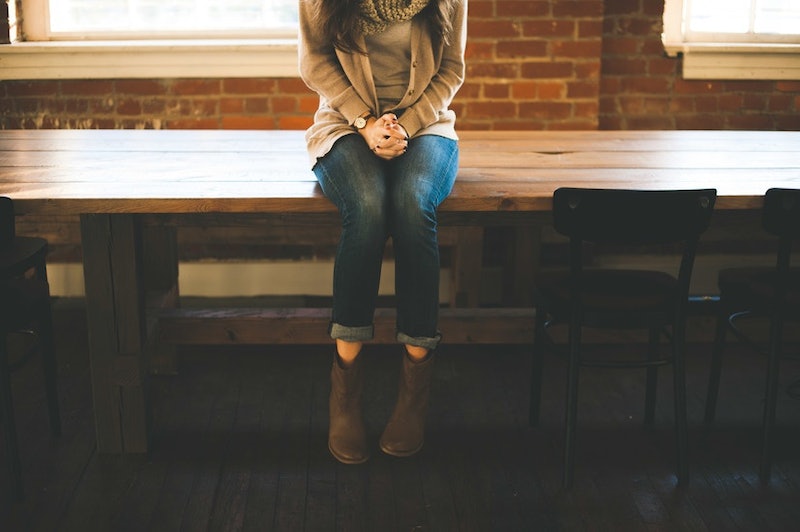 You take care of your sexual health, right? You change your underwear every day, keep things clean and neat, don't have sex with anybody who's oozing or green, and always make sure you've got a supply of condoms, dental dams, or gloves to keep sexy times hygienic? You're doing great — but there are a few other sexual health mistakes you may be making that could lead to some awkwardness, and some pain, down the line. You'd be surprised how much tiny things matter when it comes to keeping your bits in righteous good health, but if you fix your habits, it'll be much less likely to end in tears.

You don't have to compromise on sexual relaxation and go-with-the-flow fun in favor of a hardhat labelled Sexual Health Inspector. But it is necessary to actually do things properly if you want to keep having fun and not have to deal with annoying sexual health issues after romps. (Why don't we use "romp" more often? We should bring it back.) Luckily, it's all about small changes, not massive life alterations.

And remember, if any partner doesn't want to do something for your sexual health or thinks it's pointless, they are not worth your time or your vagina. Boot them out.

I know it can be tricky to remember to check the expiration date on condoms when you're getting down, but do it anyway. It's not just about possible breakage and an unexpected baby; it's also about the effectiveness of the spermicide inside the condom, which becomes less effective over time. There's a reason these things have expiration dates. If it's a no go, don't just hope for the best, either.

2. Not Being Checked For STDs When You're With A New Partner

Guys, come on, you need to get checked. I know it seems scary and annoying, but if you're getting serious with a new partner and are contemplating condom-free sex, or if you're just getting into a period where you'd like to have loads of fun sexy times with many different people, it's important to get regular updates on your STD status and ask your partners to do it too. Regular checks mean you'll know exactly where any nasties have come from, hopefully.

I am not of this type — I am a Google-it-and-become-convinced-I-have-cancer vagina owner — but I have friends who will just leave their bits to do suspicious things in the hope that it'll "clear up on its own". Whether you're afraid of doctors, scared of bad news, or just really busy, it's seriously unwise to neglect any condition that causes you pain, distress, or discomfort and lasts longer than it apparently should. Don't go screaming to the GP every time you get a bit sore after sex, but if there's discharge, spotting, aching, or anything else, hop to it.

4. Having Penetrative Sex When You're Not Fully Aroused

I know, I know, you just kind of want it to happen already sometimes, right? But waiting until your vagina's fully lubricated is a part of good sexual practice for a reason. Proper arousal in women is actually a self-protection mechanism as much as it is about pleasure. If you're not at full physical yes-put-it-in point, you don't have enough lubrication to make the insertion of foreign bodies comfortable, and you'll likely cause yourself pain and possibly cause yourself vaginal tearing, which is just as unpleasant as it sounds, and leaves you more vulnerable to infections.

That deal on cheap vibrators may not actually be as fun as it sounds. As well as the obvious needs to take hygienic care of your sex toys (yes, you do need a toy-specific cleaner, and yes, you should put them in the dishwasher if it's safe), it pays to be vigilant about the ingredients that have gone into the things you're putting in or around your bits. One of the biggest worries is phthalates, which are the subject of numerous studies on toxicity; if they show up, or if there's no label to indicate what's in the toy, stay away.

The vagina is actually a fairly good place for self-cleaning, hence why douching is often a very bad idea; it imbalances the pH of the internal vaginal flora and can cause infections and irritation. But any time you introduce foreign matter, fingers or dicks or whatever, it needs to be clean. You can quite reasonably demand that a partner cleans under their fingernails and washes their hands before they go plunging into your underpants, because UTIs are basically the least fun ever, as are vaginal infections from bacteria on their hands. Make sure they rinse off all the soap, though.

Look, just because your body's emptying out its egg-trough doesn't mean you can't get yourself pregnant. In less crude terms, the potential for pregnancy is still present while you're on your period, largely because of the long life of sperm. They can exist, alive, inside your body for up to five days or a week, which means that they can still be hovering, waiting to pounce, when you start ovulating again. Result: preggers. Oops.

9. Not Cleaning Up After Sex

Post-sex clean-up can seem like a massive hassle, particularly if you're currently having condom-free sex, but you do need to make the trip to the bathroom and clean yourself up. The main reason for this, even if you're tired or tied down or generally just want to curl up and do something else, is to avoid urinary tract infections, which become more possible if you leave another person's genital fluids on your parts. Many women also try to pee after sex if they can, to try and clean up as much as possible.