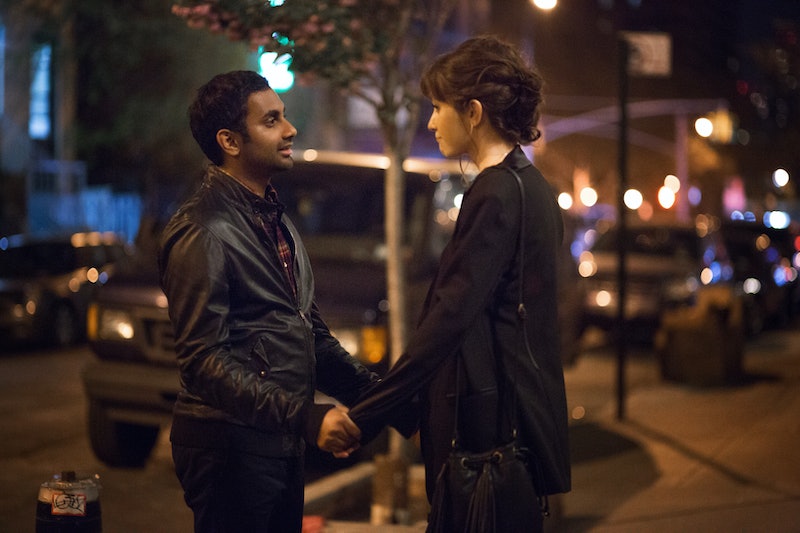 At exactly midnight on Friday, Netflix dropped Aziz Ansari's new comedy series Master Of None, and I can already tell you it's going to be the new defining show of the millennial generation. Fire up those GIFs and Tumblr posts, because the dilemmas and the situations that Dev (Ansari) and his friends find themselves in are just so today. In addition to that, in Episode 3, Dev and Rachel dance to the "best song ever" aka "Return of the Mack" by Mark Morrison — and it just happens to be the greatest 90s song ever. I cannot tell you how glad I am that this 1997 hit song is making a comeback, because it really is so amazing.

If you haven't started your marathon of this show yet, what are you waiting for? Master of None centers on Asnari's character Dev, a struggling 30-year-old actor in living that New York City life, but the series is so much more than that. The first few episodes follow him through many situations that many of today's millennials are facing: Is he ready for kids? Just how much did his immigrant parents sacrifice for him to have the luxuries of today? What should he do when a woman ignores his text message date-invite for two whole days? Are bouncy houses the best? (That one's easy — yes, they are.) In Episode 3, Dev goes on a date with an attractive, but wildly weird waitress named Alice. The date goes awry at a Father John Misty concert and he winds up at the after party with former hookup Rachel, the character you know from the opening scene of the pilot and all the trailers. They hang out, talk, and have a great time — but they have even more fun once "Return Of The Mack" starts blasting on the speakers and Dev declares it to be the greatest song ever.

So what's all the fuss about this 90s song, you ask? Read on.

"Return of the Mack" has such a distinct beginning that'll make you say "This is my jam!" right away. I dare you not to get down once you hear it. Even Complex writer Angel Diaz agrees. "And 19 years later, this sh*t still bangs," Diaz wrote in an article earlier this year. "Play it at a party and watch as everyone reenacts the video and his accent." The song represents 90s new jack swing at its finest.

The Song Samples "Genius Of Love" By The Tom-Tom Club

Back in 1997, Hanson's "MMMBop" ruled the charts for a seriously long time. Morrison's tune came close to dethroning the teen sensations, peaking at No. 2 on the Billboard charts, but sadly, the Mack never reached No. 1. He did, however top the charts in his native UK.

The Song Is The Happiest Break Up Tune

For a song about finding out his girlfriend is a cheater, "Return of the Mack" is surprisingly upbeat. I mean, the bridge is Morrison wailing, "You lied to me!" Yet, the beat's so positive and the lyrics signal Morrison's "comeback." It's basically a song of acceptance — listen to it especially after you've been hurt by your lover, but you're moving on and you know everything is going to be just fine.

The Video is GLORIOUS

Rain as tears. Random dancing in a room. Silhouettes. And Morrison keeps running into his lady cheating on him as he sings, "You lied to me" and shakes his head. It's so amazing.

The Song Is Coming Back With Full-Force

Confession: I loved this song when I was in junior high. And, I had no idea others did, too. But it seems like Asnari was feeling it back in 1996, as well as the players of the professional soccer team Arsenal, who filmed a parody video covering the song earlier this year.

But, really, nothing comes close to the awesomeness of the original "Return of the Mack." If this is a sign of things to come for the Ansari series, I've got to get back to marathoning now. Enjoy!

More like this
The First Trailer For 'That '90s Show' Includes So Many Nods To The Original Series
By Jack Irvin, Alyssa Lapid and Grace Wehniainen
The 'Dead To Me' Creator Says Her Series Finale Idea “Felt Very True To The Show”
By Brad Witter
The ‘Emily In Paris’ Season 3 Trailer Teases Major Career & Love Crossroads For Emily
By Bustle Staff
Jenna Ortega Wanted To Redo The 'Wednesday' Dance Scene For A Controversial Reason
By Grace Wehniainen
Get Even More From Bustle — Sign Up For The Newsletter