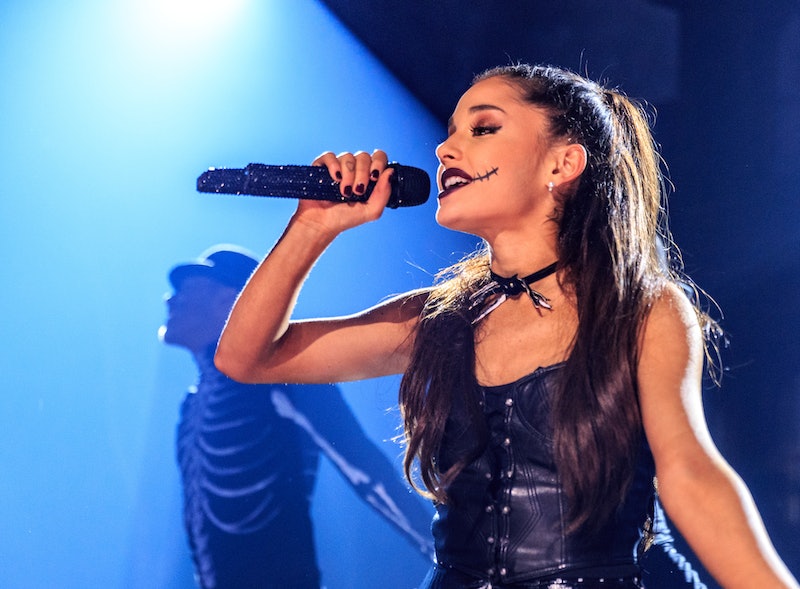 How do you feel about Ariana Grande's "Focus?" If you loved it, prepare to be disappointed. If you hated it, prepare to be thrilled. And, if you loved it only because Ariana Grande released it, then prepare to feel no way about his news. Apparently, Ariana Grande's Moonlight album is different from "Focus," which was released as the first single from the album that still has no release date. During an interview with KISS, a U.K. radio station, Grande revealed that "Focus" was a bit of a one-off, stating, "That’s why I put ‘Focus’ first because it’s the only one that sort of sounds like that. I’ve been putting little snippets on my Snapchat here and there of a couple things, but I can’t say yet because it’s not done." This should be an exciting prospect to fans whether they loved the single or not.

On the one hand, Grande's "Focus" was a fun, jazz party that also had the added bonus of taking a swipe at the media and her haters, telling them to "focus on her," because their words couldn't hurt her and she was out there working hard for her money and her fame. On the other hand, the chorus struck me as a little weak, and I wish the song had had less music and outside vocals and more, well, Ariana Grande. It's one of those singles that I could go either way on, so I'm relieved that the rest of Moonlight doesn't sound anything like it. Whether that means there will be less secret featured artists, less jazz, or less musical interludes for dancing, I'm excited all over again to see what Grande has in store for fans with Moonlight.

The reason the rest of the album sounds nothing like "Focus" is a great one. "Focus" reminded me a lot of "Problem," except blissfully without a cameo from Iggy Azalea, and Grande isn't interested in doing the same things she's done before. As she told the radio station:

I’ve been working on it over the past year while I’ve also been on tour. I’m excited for the next couple of months to not only finish the record but to have actual undivided time where I can really just focus on the music. I’m really happy with what we’ve done so far, but I just feel like once I finally get the time to really dedicate myself 100 percent I’m going to maybe outdo what we’ve already done. Maybe.

Of course, she can't predict whether or not her new music will outdo her old — or whether or not it even should considering her old music was amazing and came as a surprise to many people who assumed her to be another bubblegum, cookie-cutter former Nickelodeon star — but the fact that she's so ambitious about this project is reason enough to, well, focus on her. There are many artists who realize when they have a winning formula and stick to it, without challenging themselves much or deviating from the norm. For Grande to preface her third studio album by stating that she's experimenting with her music is great because it shows what a dedication that she has to her craft, and shows that she's not just interested in making money; she's interested in making music.

Moonlight still doesn't have a release date, but I'm already counting down the days until we get more information. If "Focus" is the oddball of the group, then I need to hear the group right now. Check out her interview below.