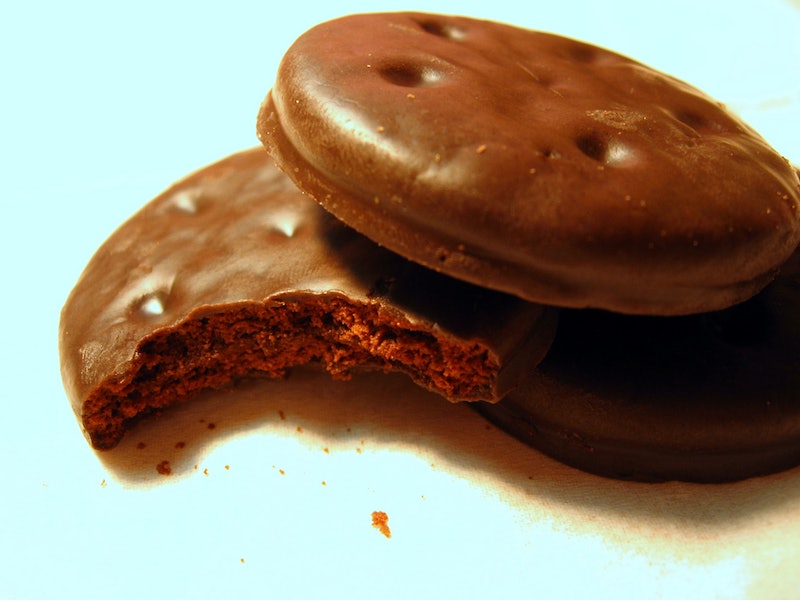 I have some bad news and some good news for you this morning, Gentle Readers. Let's start with the bad news, because it's usually better just to go ahead and rip the Band-Aid off: The price of Girl Scout Cookies is rising for the 2016 cookie-selling season. But before you go wringing your hands and tearing your hair, let me tell you the good news: It's not just a cold, heartless move intended to suck all our wallets dry. The price hike is actually for a very good reason, and ultimately, it'll make you feel not just better, but possibly even good to be shelling out a little extra cash for your beloved Thin Mints and Samoas.

According to Jacksonville CBS station ActionNewsJax, some Girl Scout troops in Massachusetts, California, and Hawaii — all high-cost-of-living areas — will be upping the price of their sweet treats from $4 to $5 this time round. Nor are these three states the only ones to see a rise in cost; prices per box vary around the country, but according to Milwaukee's CBS station, they'll be going up in Wisconsin, too — from $3.75 to $4. The overall trend, said Tammy Gentry, Girl Scouts of California's Central Coast Vice President of Marketing, to CNBC, is meant to “offset natural price increases for running the cookie program — from the cost of raw materials and bakery production to transportation.” Jan Goldstein, Chief Marketing Officer for Girl Scouts of Eastern Massachusetts, also noted that the troops will subsequently be able to take home more of the proceeds: About 90 cents per box, as opposed to the roughly 62 cents they had earned before.

As you might have guessed, many are not happy about having to dig a little deeper into their pockets for their annual supply of Peanut Butter Patties, Trefoils, and the like:

But I stand by what I said earlier — that I actually feel OK about it because of the reason it's happening. To put it in perspective, it helps to remember what Girl Scout cookies are actually for : They're meant to teach girls how to run a business and to foster entrepreneurial spirit, and they're a fundraiser to boot. And in either case? The price hike is actually a good thing. In the first, rising costs of production and subsequent boost in prices for customers out of necessity is all part and parcel of running a business; learning to navigate it such that your customers stay happy is a valuable skill to learn. It's also incredibly important to encourage entrepreneurialism in girls; with the number of female CEOs making up only five percent of those running Fortune 500 companies… well, something clearly needs to change. While it's true that a lot of that change needs to be in the general climate of both the business world and the world at large (hi there, systemic sexism!), inspiring the future women business leaders of America can only be a good thing.

And in the second case, it means that more money will go to each troop's needs based directly on their own sales. According to the Girl Scout Cookies website's FAQ, every single penny of revenue (after the bakers have been paid) stays with the local Girl Scout council, rather than going to the national organization, Girl Scouts of the USA. The money raised by cookie sales is what pays for program supplies, activities, and group travel; a “critical source of funding for local Girl Scout councils,” the cookie program is also “often what makes it possible to serve girls in hard-to-serve areas, and maintain camps and properties.” The ability to bring in 90 cents per box instead of 62 cents will make a huge difference for so many troops — and for so many girls.

The bottom line: If my money is going to support a good cause, I'm fine with it. The fact that I get Thin Mints along with it is really just a bonus.

More like this
Starbucks Released New Menu Items For The Summer
By Emma Garza
A Beginner's Guide To Drinking Whiskey
By Alexis Morillo
5 Ways To Stand In Solidarity With Women In America From The UK
By Sophie McEvoy
How To Fight For Reproductive Rights, Based On How Much Time You Have
By Courtney Young
Get Even More From Bustle — Sign Up For The Newsletter