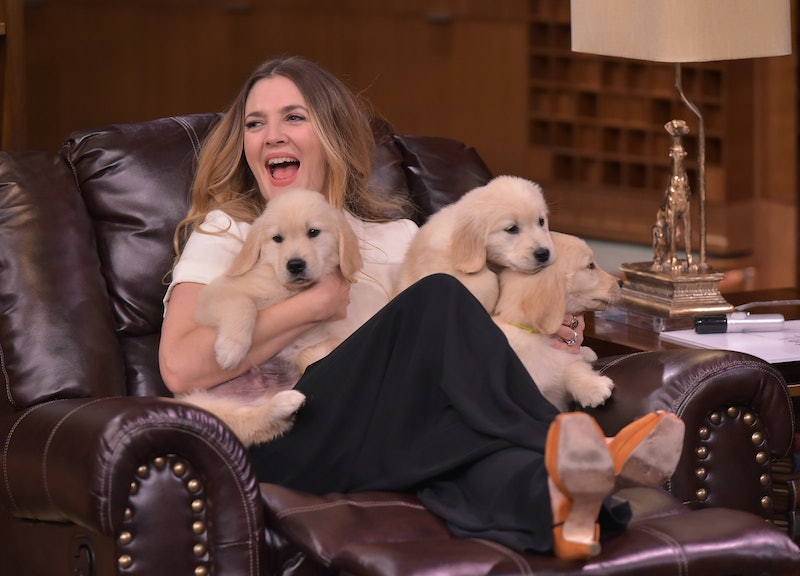 Friday marks the theater release of the much anticipated Drew Barrymore film Miss You Already . A film, which if any of the reviews are to be believed, is said to leave you weeping with tears of joy and loss. Not to mention the fact that Toni Collette and Drew Barrymore have the best chemistry. Just watch this video of Barrymore and Collette trying to decode movie emoji titles. See? Best chemistry. Nonetheless, this film will mark one in a long list of Drew Barrymore films to leave you in a state of shock and awe waiting until the DVD release, and the moment you can tweet to all your friends about it.

Most people will be running to see this film in theaters, because who doesn't love Drew Barrymore? No really, who doesn't? I don't think many actresses' films speak to such poignant times in a person's life as Drew Barrymore's. If you are feeling like a single loser who will be forever alone, you can find Solace in Never Been Kissed. If you somehow lost your memory and need help remembering the love of your life every single day, well that sucks, but 50 First Dates might ease the pain a bit! Pull up a chair, grab the popcorn, and reminisce about the days of old.

If you have not seen this movie, drop everything you are doing and go watch it. Josie Geller is the girl we never knew we wanted to be, and this is one of Barrymore's best roles to date. She gave us humor, sadness, and a healthy dose of nostalgia in just two hours.

2. Ever After: A Cinderella Story

This is a classic. Watching Barrymore play Daniella, the orphaned girl with the evil stepmother, will make you cry harder than you have ever cried. Such a beautiful twist on the story of Cinderella.

No one will ever be able to forget the crime fighting BA that is Dylan Sanders in Charlie's Angels. Nothing better than watching women kick butt and take some names.

The Adam Sandler/Drew Barrymore movie role love affair that started it all. Watching Sandler sing to the tune of "Grow Old with You" to Barrymore's character could make even the coldest of hearts melt.

On paper, this seems like a very strange plot to make a believable movie from. However, it is one of the greatest movies, not just for Barrymore, but all time. I mean, who doesn't want to fall in love again every single day of their life?

Jimmy Fallon. 'Nuff said. When you pair Drew Barrymore and Jimmy Fallon, there is enough humor present to last a century. While the movie didn't open to rave reviews, it has some of the greatest one liners of Barrymore's, and even Fallon's, careers.

One of her first film roles was playing Gertie in E.T. This movie is an American classic, but it's also hard to watch without just melting from seeing a young and adorable Barrymore in her heyday.

8. Riding In Cars With Boys

Barrymore has a way of seamlessly blending in and out of drama and comedy. She may be one of the few actresses to never get trapped in either box, and this movie proves why.

Nothing is better than a movie about family reuniting for the holidays, especially when it casts Barrymore and Robert De Niro together as father and daughter. Call it cheesy, but this one is sure to put you in the holiday spirit this season!

10. Confessions of a Dangerous Mind

If you enjoy seeing movies that are a little on the edge of crazy, then this is the perfect Barrymore film for you. Let's be honest: every once in a while we need to see our favorite stars in huge creative departures, and this is definitely one for Barrymore.

This flick about a long distance couple trying to make it work will have you rolling on the floor laughing for days! Although Justin Long and Barrymore may seem like an unlikely pair, their onscreen chemistry is killer. Definitely the cutest rom-com out there.

Drew Barrymore can do no wrong when it comes to film. She has been a staple in many classics over the last few decades, and the world is waiting for more. So take your Saturday, turn on Netflix, and find any Drew Barrymore film, because she never disappoints.