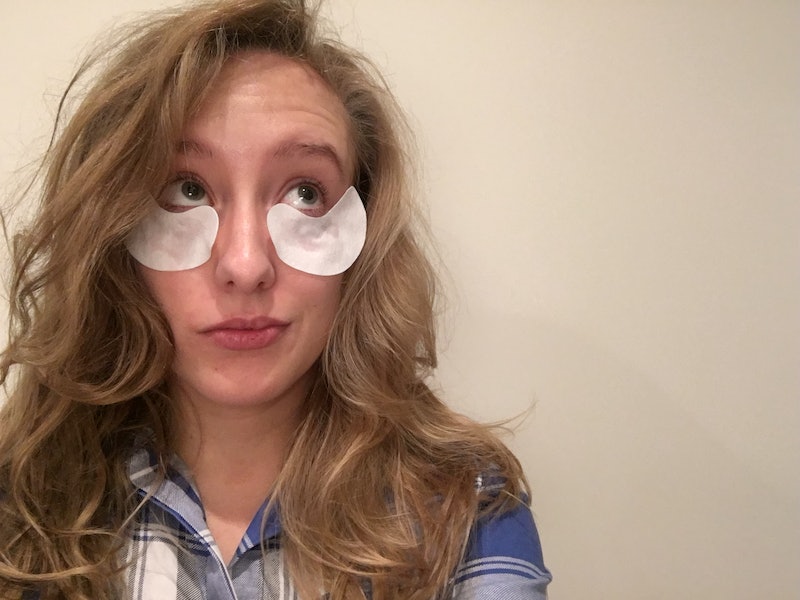 While I've learned to love my knobbly knees and lower belly that will never be flat, the dark circles and puffiness under my eyes remain a point of insecurity. After years of dismayed Google searching (and looking at my relative's faces) I've realized that those bruise-like marks will likely stick around for life, but the puffiness seems like something I could potentially use some beauty hacks to deal with.

It's not just a matter of aesthetics: That puffiness usually comes from fluid retention. And whether than retention is due to lack of sleep, allergies, or an extra salty dinner, it can cause an uncomfortable pressure around the eye area. While it's not totally unbearable, that heavy feeling is just not something I'm dying to deal with while I'm trying to convince myself I'm excited to get ready for work at 7 a.m.

According to the internet, there are loads of natural methods and product treatments to soothe tired, puffy eyes, but I've always been a bit skeptical about putting potatoes on my face. So, finally, I decided to try every technique over the course of a couple weeks to see if at least one or two could be a viable de-puffing hack for me to add to my routine. Here's how it went.

Note: In all the side-by-side photos below, the photo on the left is me immediately after waking up while the right is me after trying the de-puffing hack. The only product(s) on my face are the treatment I tried. Unless otherwise mentioned, I left the treatment on my eyes for 10 minutes.

My cats were pretty stoked about this one. If you've seen a stock photo of someone at a spa, you probably recognize cucumbers as the most common DIY method that will allegedly de-puff your eyes. According to the Huffington Post, the temperature of cold cucumbers will reduce swelling while their antioxidants go to town on any irritation.

De-Puffing Ability: 5/10. Though the cucumbers smelled really nice, they also sort of stung my eyes, which wasn't exactly the relaxing experience all those aforementioned stock photos imply. My bags were only slightly less noticeable, but the cold cukes did make them look more open (though maybe that was the burning...).

The cold theory is the same for potatoes as cucumbers, while the natural beauty world claims that potatoes also contain an enzyme called catecholase, which heightens their ability to de-puff.

De-Puffing Ability: 0/10. Are my eyes... puffier post potato?! The spud slices definitely stung a lot, and slid around even more than the cucumbers, probably due to size. Plus, the potatoes left this really gross residue on my face. This remedy was not for me.

Rollerball applicators are popular for eye creams, because the tip stays cool while you apply. Plus, that rolling applications helps massage down some of the extra fluid that's collected to cause eye bags. This one is specifically formulated for puffiness with eye-opening ingredients like hyaluronic acid and caffeine.

De-Puffing Ability: 8/10. My eyes weren't as puffy as usual this morning, but the left one was definitely not in the mood to open entirely. The cold roller ball (which I stored overnight in the fridge for extra coldness) felt heavenly on my tired eyes. I think the massage aspect of this technique was key; I could actually feel the extra fluid being gently pushed out of my undereye area.

I had to give you a little side view for this one, because you can really see the reduced puffiness this way. Also, check out that big ol' vein under my eye in the before, because it totally vanished with a little roller ball massage.

Apparently, egg whites are an astringent, so they tighten the skin underneath your eyes, which I guess is supposed to make them look less puffy. Some sites recommend mixing the whites with some witch hazel, but since I kept the rest of my natural remedies to one ingredient, I opted to go without.

De-Puffing Ability: 7/10. Despite how kinda-gross having raw eggs roll down my face was, I could actually feel it working to tighten (and therefore de-puff) the area under my eyes once it started to dry. Unlike the cucumbers and potatoes, there was no burning because the egg wash went under my eyes only, not on top of my lids.

My only complaint is how much of a waste this method was — I threw away most of the white, but I suppose with better planning I could have made breakfast with the excess.

Beauty sites frequently insist anyone with puffy-prone eyes should always keep a couple spoons in the freezer to reduce swelling. If you have a particularly baggy morning, use the frozen spoons to gently massage the puffiness away. Obviously spoons don't contain any vitamins or antioxidants, so it's really just about the temperature here.

De-Puffing Ability: 2/10. I truly did not enjoy this method. The spoons warmed up quickly, and then I was stuck holding kinda-warm spoons on my face. My eyes opened up a little bit, but there wasn't a visible amount of depuffing happening, and I think it made the dark circles worse.

Similar to how it soothes your sunburn, the inflammatory properties in aloe should theoretically get rid of puffiness under your eye. Storing it in the fridge only adds to the soothing effect.

De-Puffing Ability: 4/10. The bags are definitely less noticeable, and the aloe felt really nice to apply. It had a similar, sticky-and-tightening effect as the eggs, but wasn't nearly as effective. Still, it's nice to know my tube of aloe could work double duty come summertime.

This serum is is supposed to have long term anti-aging effects, but I was only interested in it's alleged instantaneous firming abilities. It contains hyaluronic acid spheres for moisture, plus firming polymers and oat kernel extracts that tighten the skin. You pump a bunch underneath your eyes and then put these handy pads on top to keep it in place for about 15 minutes. The pads are supposed to help the product absorb into your skin rather than evaporating into the air.

Eye De-Puffing Ability: 8/10. Guys. I love this stuff. My skin was so soft after, plus it had a warm, tingling sensation (similar to a lip plumping treatment) that was such a nice change of pace from all the cold stuff I had been putting on my face. Plus, unlike most of the other treatments I tried, this one appeared to reduce my dark circles too.

First, can we just talk about the color of this cream? The iridescence literally comes from ~liquid crystals~ , and is definitely what convinced me that this, out of the thousands of eye creams out there, was the eye cream I needed to test for this experiment. I used the tapping technique for application which, paired with whatever product you like to use under your eyes, is supposed to gently massage out fluids.

Eye De-Puffing Ability: 5/10. The tapping technique was fine, but it wasn't as effective as the serum that stayed on for 15 minutes. However, the extreme moisturizing properties of the eye cream makes me want to keep it as a regular product in my beauty arsenal.

This probably ties with cucumbers as the well-known puffiness remedy. I used green tea, because the caffeine is supposed to constrict blood vessels, like the ones under your eyes that are all swollen after no sleep.

Eye De-Puffing Ability: 7/10. Tea does work great to soothe swollen eyes, but my lord is it time consuming. You have to brew the tea of course, but then you also have to wait for the bags to cool (which, even with the assistance of the refrigerator, can take a pretty long time), and then you can leave 'em on your eyes for 10 to 15 minutes. It's not so much a Quick And Easy Hack as A Trick For People Who Magically Have A Spare Hour Just To De-Puff Their Eyes. At least you get to drink the tea.

Full disclosure: I was already obsessed with this eye pillow before I started this experiment. It's made from 100 percent silk, which is supposed to have major skin care benefits on its own. Apparently, if you stick an eye mask like this into the freezer before you pop it on, it's supposed to help with de-puffing too.

De-Puffing Ability: 1/10. The pillow, despite being left in the freezer for a full 24 hours prior, heated up to room temperature almost immediately, which sort of rendered the cooling theory irrelevant. I will definitely still be using the eye mask to sleep in on the regular, just because it's so darn soft and comfy.

So Which Treatment Works Best?

Sorry, all you natural beauty junkies, but I have to side with the man-made products in this experiment. But that's not so surprising, is it? Nature just coincidentally produced some treats that happen to also have an effect on human skin, while these creams and lotions are specifically formulated to do one thing: make your eyes less puffy.

However, if you're trying to live a totally organic life, I'd recommend the tea and the egg whites, if only because it means taking care of your skin care and brunch needs simultaneously.

More like this
The Friends Of Glossier Summer Sale Is Back
By Tomi Otekunrin
Charlotte Tilbury Just Launched A Royal Collection To Mark The Queen’s Platinum Jubilee
By Tomi Otekunrin
What To Know About Brow Microshading Vs. Microblading
By Danielle Sinay
21 AAPI-Owned Beauty Brands That Will Be Your New Favorites
By Audrey Noble
Get Even More From Bustle — Sign Up For The Newsletter