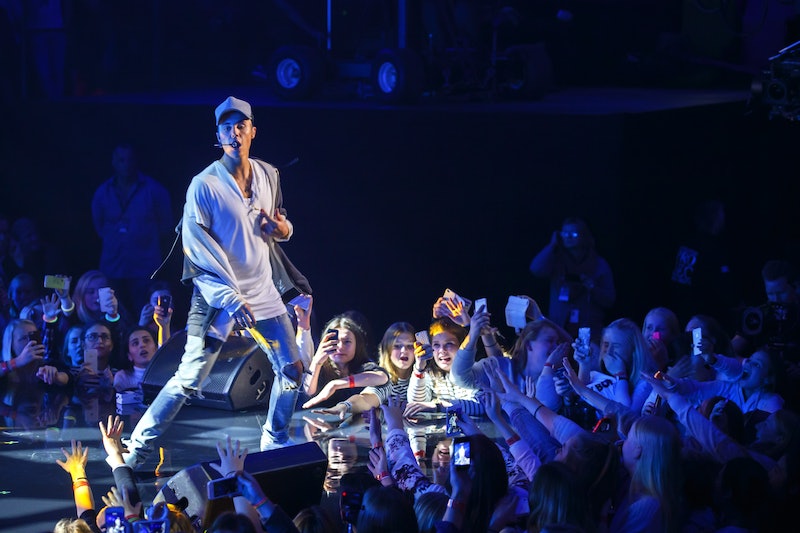 Whatever you think of Justin Bieber as a celebrity, you have to admit that he's been making some amazing music lately. I didn't want to own up to it, either, but he's been releasing one amazing track after another in 2015 and I've finally just given in. His latest single, "Sorry," could be one of the best songs of this year — yes, it's just that good — and now it's about to get even better. How? Well, Bieber dropped a "Sorry" bilingual remix featuring reggaeton artist J Balvin on iTunes and Spotify on Thursday night, and it's taken the song to even greater heights (which I didn't even know was possible).

Perhaps unsurprisingly (given the whole "bilingual" aspect), the "Sorry" remix features Balvin rapping one of the verses in Spanish, which works incredibly well and sounds totally natural, as if that's the way the song was all along. The collaboration totally works, and the song is already at the top of the iTunes Top 100 chart in Mexico as of Friday. Not only will the remix likely be a major commercial success (more than it already is, of course), but it'll also widen Bieber's Latino audience, which is always a good thing.

Bieber and Balvin announced the collaboration before its release via Instagram on Thursday in a pretty adorable video, which you can see below:

In the video, Bieber tells Balvin that the Latino girls will go crazy for the song, and he's not wrong — but it's also not just Latino girls. You'd have to be crazy not to get that "Sorry" is a great song in every way, and the remix is even better, regardless of whether or not you speak Spanish (which I only vaguely do). Plus, given that there are approximately 400 million Spanish speakers in the world, he's opening up his music to a massive new world of fans — fans who likely already listened to him, of course, but who will feel a much greater connection to him now that they're literally speaking a common language. Not only that, but it gives English audiences a chance to get familiar with Balvin, which seems like a pretty great thing to me.

Have a listen to Bieber and Balvin's "Sorry" remix below and then try to tell me it's not probably the best thing you've heard all week. I dare ya (except not really, because that's an impossible task).