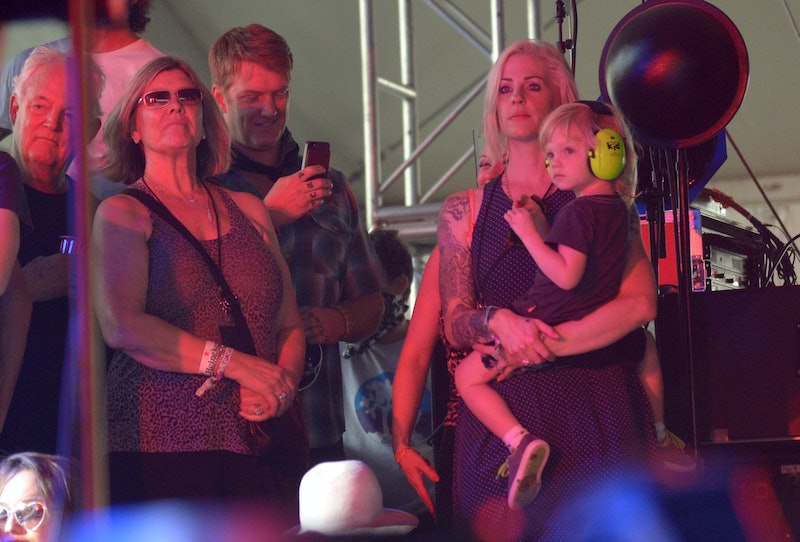 As a woman who has been involved in multiple bands throughout her life, I can attest to the fact that being a musician can often result in non-stop, exhausting chaos. Though it's obviously ridiculously fun and truly exhilarating, the life of a musician can also involve completely frenetic schedules and long work days. So I can barely imagine how female musicians with young children cope in balancing the tenacity of their lifestyle alongside the pandemonium of being a mom (respect to you, mothers!).

In the December issue of In Style, the ridiculously cool Gwen Stefani admits to having "struggled" with balancing her life as a mother with the needs of her career, admitting that the experience of making No Doubt's 2012 album "Push And Shove" was a pretty difficult one. She said: "Every day I would take the kids to school, drive to Santa Monica, work on the album, and then I'd think, 'Oh my god, if I don't leave by 2:30, I'm not gonna get home in time for dinner.' I'm not gonna say there weren't some incredible moments making that album. But it was a lot of knocking my head against the wall. A lot of struggle."

But she did it, and she continues to do it! For women who live a similar reality of balancing a demanding career with raising a family, Stefani — and other marvelous, musician women of her ilk — are a steadfast inspiration. And you know what? They're also cool as hell, and deserve all the recognition in the world. Here's six of the coolest musician moms around.

This one goes out to all the tattooed moms of the world! Dalle, best known as the front woman for punk band The Distillers and indie band Spinnerette, is also the mother of two children with her husband Josh Homme of Queens Of The Stone Age (the two of them can often be seen in unbearably adorable pictures with their children back stage at shows). Dalle has been consistently upfront in interviews about her experiences with postnatal depression, staying sober for her children, and struggling with pregnancy weight gain as a performer in the public eye.

Though older sister Beyoncé is also obviously a super cool mom, Solange pushes creative boundaries and wows with innovation. With a young son, Julez, to take care of alongside her music ventures, Knowles has confessed to having had to compromise her career in order to put the needs of her family first, including canceling eight scheduled European shows in 2013. As she told US Weekly: “Between moving part-time to a new city, starting my son in a new school, and writing-recording my new record, I really had to make the best decision for my mental-physical health."

The grandmother of punk, herself, Smith actually took herself away from the public eye for 16 years in order to concentrate on raising a family. Quite simply, Smith remains one of the coolest women of all time. She's original, a visionary and a true, iconoclastic feminist artist. Her decision to put her art on hiatus in favor of bringing up her two children, Jackson and Jesse, is something to be admired — after all, 68-year-old Smith has been back for a while now and she is still just as cool as ever. Sometimes art can wait.

Chan Marshall (aka Cat Power) is a formidable female artist with a musical history which spans everything from downbeat, severely minimalist reworkings of upbeat classics to soul infused anthems of relentless strength. Marshall is the newest mother on the list, she announced that she'd given birth as an afterthought within an Instagram post that spoke out about the Baltimore Riots and pleaded for justice for Freddie Gray.

Tucker, of the band Sleater Kinney, easily makes my top 10 guitarists of all time list. She has a unique sound all of her own, and is capable of some of the fiercest riffs you may ever hear. She is also a mom as well as being a musical force of nature, something which she told Time magazine is more difficult than it may seem. She said: "I certainly wouldn’t ever advise a young woman (or anyone) in rock that having a child and being a touring musician would be a breeze. It’s really really hard." Thankfully for all of us it didn't stop her from making all of our dreams come true this year by hitting the road with Sleater Kinney for a colossal comeback tour.

The anti-folk heroine has been at the forefront of the DIY music scene since her eponymous debut album in 1990, and is known for her feminist activism and relentless work ethic (seriously, if you type her name plus 'tour' into google at any one time then you will find dates. The woman has barely ever stopped touring). True to form, Difranco is realistic about her need to balance her creative work with her family life (she has two children) and the intense pressures that come with that. As she said in an interview with The Frisky: "Babies just need so much. I think the expectation for women to go back to work and keep doing the myriad of things is very intense. I find it intense, too. How do you do it? I dunno. I think for me the most important thing, the most important ingredient, is to not expect to have it all, especially in the early days."

It feels as though society is often trying to reinforce tired stereotypes of what exactly a mother is and should be instead of just letting women live their lives, free of archaic structures. A mother no longer needs to be a housewife if she chooses not to, nor does she have to give up her career. What society often neglects to remember is that moms are human too, with their very own set of needs. And you know what else? Moms are hella cool.