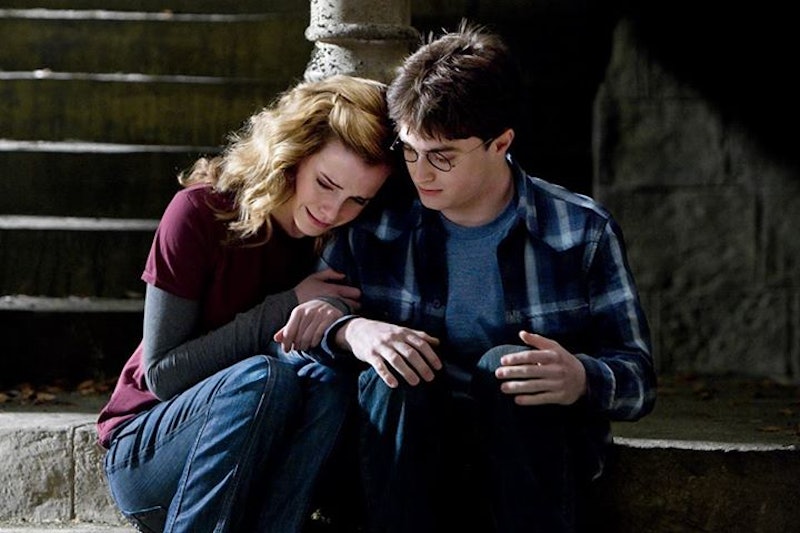 Harry Potter might be one of the most popular series of all time, but that doesn't mean being a Harry Potter fan is easy. Sure, everything about the series is great, and J.K. Rowling shaped our childhoods. But really, when you think about it, those books are dark. Sure, the second half of the series is much darker than the first, but even so, Harry Potter and the Sorcerer's Stone opens with a 1-year-old newly orphaned baby. You can't expect it to get too much brighter with a start like that.

In Sorcerer's Stone, readers everywhere fell in love with the series. You probably remember getting your first Harry Potter book, and how much you loved it, and couldn't wait for the next one. You likely spent most of your childhood reading the books, watching the movies, and wondering what could possibly happen next. I know I did. But along with that, you probably spent a lot of time asking why and crying as yet another emotionally devastating chapter ripped your heart to pieces.

By Deathly Hallows, we thought we were prepared for what was coming (spoiler alert: we weren't). Harry was going to face Voldemort, and our childhoods were coming to a close. It would be fine, right? Wrong. So, so wrong. The emotional turmoil of the rest of the series did not prepare us for this. Years later, I'm still not over some of the more emotional moments of the series. Here are 16 moments that are pretty much guaranteed to make Harry Potter fans emotional, even now. "After all this time?" "Always."

The Mirror of Erised

When Harry sees his parents in the Mirror of Erised, all the way back in Sorcerer's Stone, readers were heartbroken for him. Even at 11 years old, he already knew so much loss. All he wanted was to be with his parents again, and the mirror allowed him to be. Needless to say, we were even more emotional when Harry goes back again, only to find that the mirror has been removed.

The moment in Prisoner of Azkaban when Harry realizes it wasn't his father's patronus that saved him, and that in fact, it was his own that had saved the day. In that moment, Harry realizes how much he is capable of, and, of course, that his father can't and won't be there to save the day. Not to mention that Harry's patronus is a stag just like his dad's. *sob sob*

When Harry Realizes He Has Family

When Harry realizes that Sirius Black is not a dangerous criminal but someone he can trust, it fills him with the hope of a family, a new home, and a future he never could have dreamed of. Of course, these dreams are short-lived, as Sirius and Buckbeak ride off into the night together, but still. He had a family.

Despite the rest of the school tormenting Harry throughout the Triwizard Tournament, Cedric was always understanding, and even shared his knowledge about the golden egg. No one expected him (or anyone, for that matter) to die in the competition, so his death was especially shocking. Cedric's death also marked the official return of Voldemort, which was a whole other range of emotions we weren't prepared for.

When Neville and Harry Bond

They both lost their parents when they were way too young. They both have something to fight for. Seeing Harry and Neville work together to live up to their parents' legacy was almost too much.

Sirius was the only family Harry had. If this moment doesn't make you emotional, your soul might be a Horcrux.

"After All This Time?"

"...Always." As in, I will always be crying over this moment.

I'm still convinced there was a world-wide gasp and sob when this happened. I mean, it's DUMBLEDORE.

"And Percy was shaking his brother, and Ron was kneeling beside them, and Fred's eyes stared without seeing, the ghost of his last laugh still etched upon his face." I'm not crying, you're crying.

When Harry Never Wanted Anyone to Die for Him

He knew he was the chosen one. He knew he was the one who had to find and destroy the Horcruxes. He had to face Voldemort on his own. Which makes "I never wanted any of you to die for me" even more heartbreaking to read.

When Ron Leaves... And Then Comes Back

Harry thinks his best friend has turned his back on him. Hermione thinks the love of her life is gone and not coming back. And then he comes back and everyone's so relieved that they're also angry, and we're all just sitting there crying because they really are best friends aren't they?

Hermione erases her parents' memory of her to keep them safe. Just let that sink in.

This moment is actually painful to read. And watch, and think about, for that matter.

"A free elf." Dobby lived to help Harry survive, and he died to make sure of it.

Deathly Hallows From Start to Finish

The series comes full circle when Harry takes his own son to Platform 9 3/4, and reassures him as he frets about being placed into Slytherin. He and Ginny are together, Ron and Hermione are together. "The scar hadn't pained Harry for nineteen years. All was well."