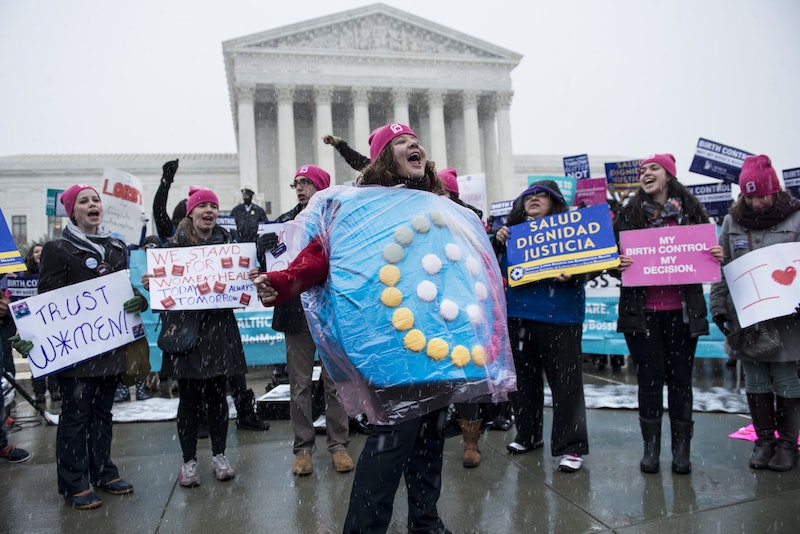 It's been more than five years since Congress passed the Affordable Care Act, yet the law's birth-control mandate is still up for debate. The Supreme Court will rule on the birth control mandate in 2016, once again placing women's access to insurance-covered contraception on the chopping block in the name of religious freedom. The announcement came on Friday, capping off an otherwise quiet week in reproductive rights news.

While reproductive health activists prepare for another birth-control battle at the Supreme Court, another possible legal challenge is still brewing. The Supreme Court has yet to announce whether or not it will take up abortion laws in Texas and Mississippi that have shutdown, or threaten to shutdown, a number of clinics. In Jackson Women's Health Organization v. Currier, the Supreme Court will look at Mississippi's 2012 admitting privileges law, intended to close the state's last remaining abortion clinic; the Fifth Circuit Court of Appeals upheld an injunction on the law in 2014.

Meanwhile, Whole Woman’s Health v. Cole will take on the ambulatory surgical center and admitting privileges requirement of the Texas law HB2. The law's admitting privileges provision has closed nearly two dozen abortion clinics since 2013, leaving just under 20 clinics in the Lone Star State. If the ambulatory surgical center requirement, which is currently stayed by the Supreme Court, goes into effect, just 10 abortion clinics will be left in Texas, according to the reproductive rights group Fund Texas Choice.

As we await the Supreme Court's decisions on abortion rights in Texas and Mississippi, here's a look at the other reproductive rights stories you may have missed this week:

Repeal The Eighth Campaign Heats Up In Ireland

While the Ireland circumvented the Catholic Church's anti-gay policies earlier this year, the Emerald Isle still has one of the harshest bans on abortion. Under the Eighth Amendment, abortion is illegal in every circumstance, including rape, incest and severe fetal abnormality; women in Ireland can only obtain an abortion if their life or mental health is at risk, but even then, the procedure requires approval by at least two doctors.

As part of the #repealtheeighth campaign, activists in Ireland this week began tweeting their periods to Prime Minister Enda Kenny to highlight how the state has such a strong hold on their reproductive systems. According to The Guardian, Irish woman Grainne Maguire launched the period tweet campaign, and hundreds of other Irish women soon followed Maguire's lead.

In 2014, Missouri enacted a 72-hour waiting period law — no, not a waiting period before buying a gun, but before undergoing an abortion. Yes, that means a woman must receive an ultrasound and in-person counseling at the clinic, then wait three days before returning for the procedure. It's one of the harshest waiting periods before an abortion in the United States.

Researchers at University of Missouri are currently studying the effects of Missouri's 72-hour abortion waiting period, how it impacts a woman's decision, and what happens when women who signed the informed consent form at the first trip to the clinic never return for their abortion procedures, the Columbia Daily Tribune reported. But Missouri state Sen. Kurt Schaefer, a Republican, believes the waiting-period study actually violates state law. Schaefer accused the university of encouraging women to receive abortions — and using state funding to do so.

"The study does not appear to be designed as an objective, unbiased research project, but rather as a marketing aid for Planned Parenthood — one that is funded, in part or in whole, by taxpayer dollars,” Schaefer wrote in a letter sent to University of Missouri Chancellor R. Bowen Loftin.

Schaefer claimed the study somehow violates the Missouri law barring state funds from providing abortions, even though the study does not pay for nor perform abortion procedures. The university has defended its researchers, upholding the research as "academic freedom."

Will Your Employer Stop You From Getting Birth Control?

So, here we are again: Your employer may receive greater control over your birth control choices. In 2014, the landmark Hobby Lobby ruling gave closely held for-profit companies the right to refuse to provide insurance coverage for certain types of contraception, based on the companies' religious beliefs; the narrow ruling was soon opened to include all forms of contraception, including "the pill." Now, the Supreme Court will decide whether or not birth control accommodations for religious nonprofits and schools violates Religious Freedom Restoration Act. The accommodation exempts these religious institutions from providing contraception, instead allowing women to receive coverage directly from health insurance companies. Yet many religious institutions have been arguing that just signing the accommodations form violates their religious beliefs because, well, how else can they block women from having access to birth control?

Gretchen Borchelt, vice president for health and reproductive rights at the National Women’s Law Center, said Friday in a statement:

Women deserve insurance coverage of birth control no matter where they work or go to school. The birth control benefit has been a game changer for women—in just one year, the benefit saved women over $1 billion and advanced their well-being. Now 55 million women are eligible for this essential coverage. It’s unfair and harmful for some employers and schools to use their religious beliefs to deny women vital health care that also makes them more economically secure. The Supreme Court must stop these efforts to undermine women’s health and ensure that women continue to have the seamless access to birth control that they are entitled to under the law.

The Affordable Care Act has given millions of American women access to birth-control coverage without a co-pay and, with it, the ability to make their own medical decisions and determine their own destinies. This case could undermine one of the greatest advancements for women’s health in a generation, by sanctioning discrimination over a family-planning service used by over 99 percent of women at some point in their lives. The Supreme Court needs to lay this issue to rest once and for all by refusing to grant any discriminatory exceptions to the rights of women in this country, including their own religious freedom. We will not tolerate any institution exercising control over women’s bodies or forcing any individual to adhere to another’s religious beliefs.

Raw Story gave us this delightful video of Arkansas pastor Jeff Crawford preaching to his congregation that women don't have the right to their own body. This idea that you hear about in the abortion debate that it’s a woman’s right to choose and she has the right over her own body, no, that’s not true!” Crawford said. “What that means is that your arms and your legs and your head, it all belongs to God.”