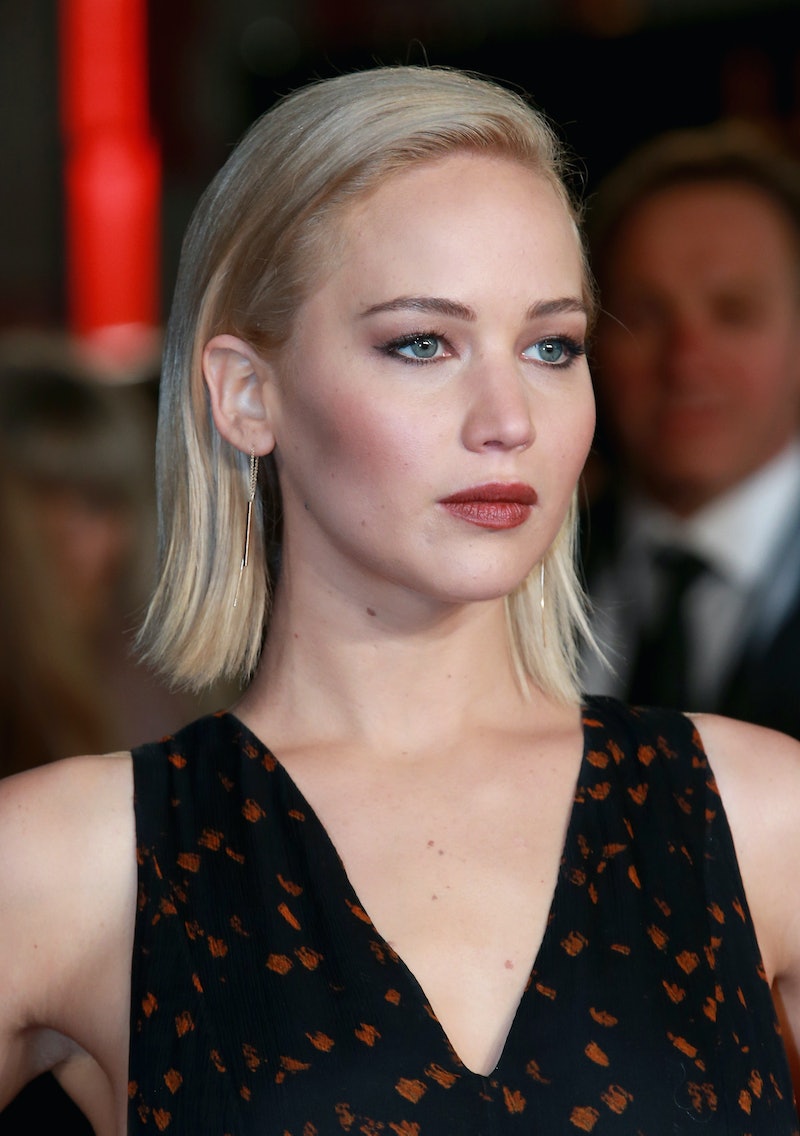 May the style odds be ever in your favor. Jennifer Lawrence has a new stylist, and from the looks of her Mockingjay, Part 2 premiere ensemble, they are a match made in heaven. Just when you thought the actress couldn't get any more fierce! Lawrence has always had amazing style, but there's no doubt she's looking a bit edgier these days.

The Hollywood Reporter noted that, according to an Instagram "on the account of styling team Jill Lincoln and Jordan Johnson last Wednesday, Lawrence, who has been styled by Rachel Zoe herself in years past, seems to have departed her longtime stylist to work with the former Zoe Studio employees, who parted ways with their former employer in March." A representative from The Wall Group, where Lincoln and Johnson now work, confirmed to Bustle via email that the duo is now working with Lawrence.

For those of you not familiar, Lincoln and Johnson used to work with Zoe on The Rachel Zoe Project. The two stylists went solo earlier this year and appear to have picked up a number of high profile clients since then, judging by their Instagram account. In addition to reportedly styling Lawrence, they appear to be working with Kiernan Shipka, Sofia Vergara, and Halston Sage as well.

Lawrence has always had impeccable style. Here's how her look has changed.

Lawrence looked lovely and ladylike on the press tour for Mockingjay, Part 1.

Just before the Mockingjay, Part 2 premiere, Lawrence traded her feminine white dress for something a little more sexy.

She showed up with a stunning new bob and a mostly white outfit at a Hollywood ceremony.

She stepped up her style game for the London premiere of Mockingjay, Part 2, and her platinum hair looked better than ever.

I'd say that's quite the style transformation. From her hair to her clothing, Lawrence is practically a whole new woman. I can't wait to see what she wears next.

More like this
Why “Patch Snatch” Ponytails Are Everywhere Right Now
By Tomi Otekunrin
How To Style Your Hair For A Festival, According To Maya Jama’s Hairstylist
By Tomi Otekunrin
Jennifer Lopez's Diamond Mani Shows Off *All* The Rocks That She's Got
By Audrey Noble
Alyson Stoner Says She Went To Rehab After Auditioning For 'The Hunger Games'
By Jake Viswanath
Get Even More From Bustle — Sign Up For The Newsletter