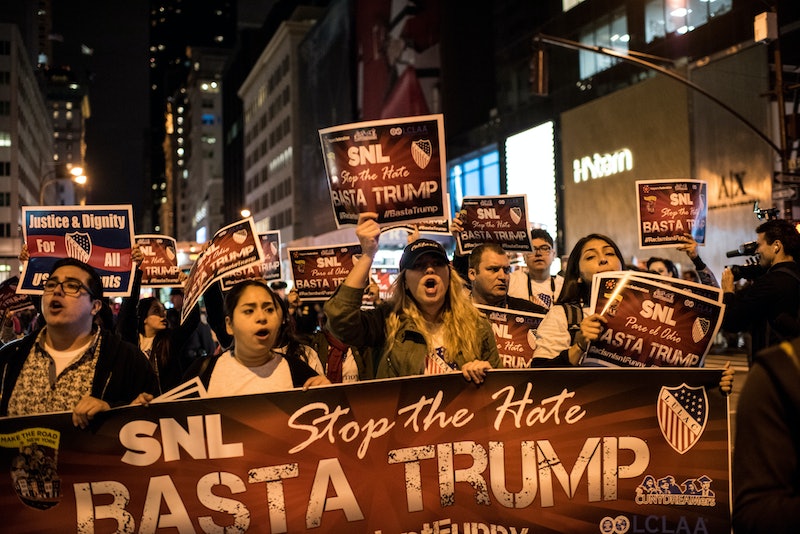 So, Donald Trump's Saturday Night Live episode has come to an end. His appearance inspired everything from protests about his previous comments about Mexican immigrants outside of Rockefeller Center to eye-rolls from people who are unenthused with his 90 minutes of free publicity to shrugs from those who thought he might do a good job of taking a joke. After all was said and done, was all of the hubbub worth it?

Not really. Trump wasn't in the show very much (thankfully), when he was, he mostly played himself, and the softball jokes tossed at him were wan and not all that funny. For all of the attention Trump has drawn to the show, it would have been great for SNL to respond with a truly hilarious episode. It's not an unreasonable expectation; it's happened in the past that the show has turned appearances by politicians into comedy gold. Unfortunately, this was nothing like when Sarah Palin showed up during the Tina Fey/Amy Poehler years.

So, who summed it up best? David Brody, an executive producer on Elvis Duran and the Morning Show, had the perfect tweet to describe the experience of watching sketch after sketch tank on SNL.

We couldn't agree more. SNL, don't buddy up to politicians anymore. It may get people to tune in, but it won't make the show funny. Nothing is more harmful to a comedy show than a "meh" reaction on Twitter. Burn too many viewers that way, and they'll stop watching altogether.