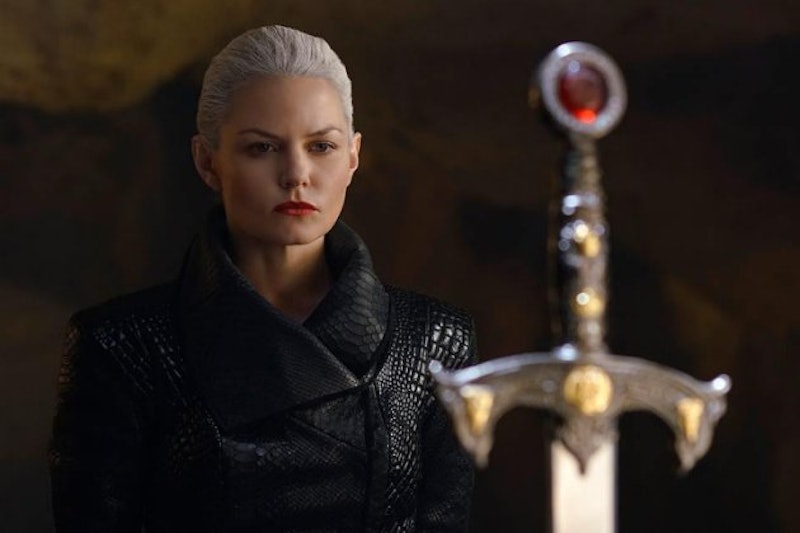 Ever since Emma became the new Dark One at the end of Once Upon A Time Season 4, things have gone from bad to worse relatively quickly. Only six episodes into Episode 6 and she's already embraced her darkness completely, cast a Dark Curse to steal everyone's memories from Camelot, and managed to break her son's heart — pretty impressive accomplishments for a few short months. On this Sunday's OUAT episode, "Nimue," Emma summons the very first Dark One ever in order to grant her the power she'll need to reforge Excalibur and the dagger to snuff out the darkness (or the light) for good. Something tells me that's not going to end well.

Given that we've been hopping back and forth between Storybrooke in the present and the missing six weeks in Camelot, it's hard to tell whether Emma's summoning the original Dark One on her own now, or if she tried it back in Camelot with Merlin at her side. My guess is it's likely the former, as Merlin's former lover Nimue is the one he's named to help him banish the darkness from Emma and the world as a whole, if memory serves. Then again, Nimue herself could be the original Dark One, but that remains to be seen.

It doesn't take rocket science to determine that Emma's interaction with the first ever Dark One, who's likely the source of all evil in the world (at least within the Once mythology) is probably going to be less successful than she would have hoped, and could even submerge her even further into her own dark identity and pull her further away from the Savior she once was. I personally have enough faith in Emma Swan to believe that she will ultimately be her own hero (with some help from Regina, Henry, her parents, and yes, even Hook, as much as it pains me to say it) in the end, but I think it'll be along, hard road before we get there.

It'll also be interesting to see how the Dark One came to be in the first place. Did Merlin create the Dark One? All signs were pointing in that direction up until now, but if Nimue is indeed the original Dark One, maybe the story was wrong all along. Merlin loved her, and would have been broken-hearted to lose her to the darkness, so would it really have been he who condemned her to such a cruel fate? Unlikely.

Nimue is, in Arthurian legend, the Lady of the Lake, and the woman who stole Merlin's heart before locking him in a tree. Once Upon A Time showed a Dark One doing the deed, so whether or not that's Nimue or just artistic license, there's something big and important that will be revealed once we come face to face with that Dark One that I can't wait to see. I just hope Emma makes it out of the encounter alive (which, come on, you know she will).