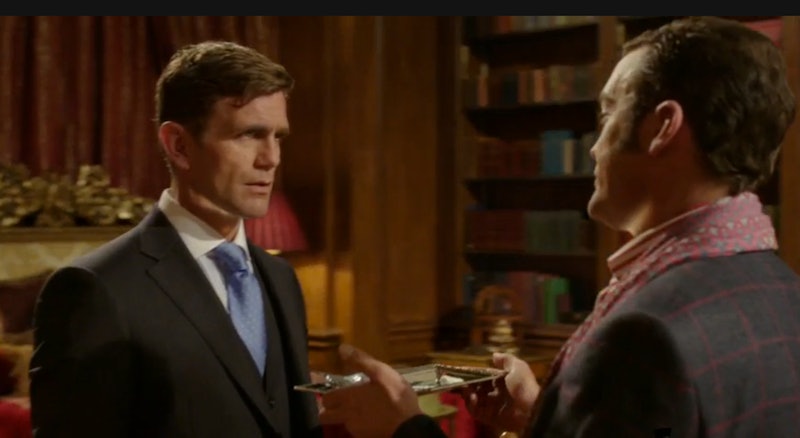 Now that The Royals is returning for its second season on Nov. 15, it's time to jump back into the very fictionalized world where British royals have to deal with paternity scandals, assassination plots, and parties that run all night long. But, I'll admit some of the side characters are a little bit fuzzy to me after the show's hiatus — like who is James Holloway on The Royals ? His face is familiar, but the character appeared so briefly (just four episodes in Season 1) that there's no shame if you forgot who he was. I know I did, at least by name. One thing that should be unforgettable, though, is that he's one of Cyrus' illicit affairs.

But, he's also an important character, so he's worth remembering. James Holloway could be the key to Season 2 of The Royals — seriously. This side character is at the crux of several very important details in King Cyrus' (what a change!) plan. First and most importantly, James is acting as Cyrus' alibi for the night of King Simon's death — even though Cyrus wasn't actually with him. And if someone, be it Queen Helena or one of her kids, were to interrogate or bribe Holloway to tell the truth, he would be an invaluable ally.

The new king can't be suspected for killing his brother if he was spending the time with a high-ranking Parliament official... but if that were revealed to be a lie or a coverup, all of a sudden Cyrus goes back to being the chief suspect.

Oh, and that's the next big thing to know about James Holloway — remember, he's a very important Parliament member. Cyrus is exploiting him not just because he loves manipulating people into sleeping with him, like Prudence, whose baby will probably be born during Season 2, but because remaining in the closet is key for Holloway, who's married and wants to keep his position as a politician. So doing what Cyrus says is going to be of the upmost importance to Holloway — and he may need serious convincing to open up.

James is also the person who can stop the movement of the vote to either support or reject the petition to abolish the monarchy. Obviously King Simon was for it, while King Cyrus has been very much against it from the beginning. Depending on which side he winds up on, he could either ensure that Cyrus' bloodline could remain in power, or eliminate the Royals altogether.

Unfortunately, actor Scott Maslen hasn't revealed any particularly juicy hints about what James Holloway will be up to in Season 2, including whether or not he'll be switching allegiance from Cyrus to someone else. But, with the intricate chess game that is The Royals Season 2, the characters should be smart enough to realize that Holloway is a valuable piece.