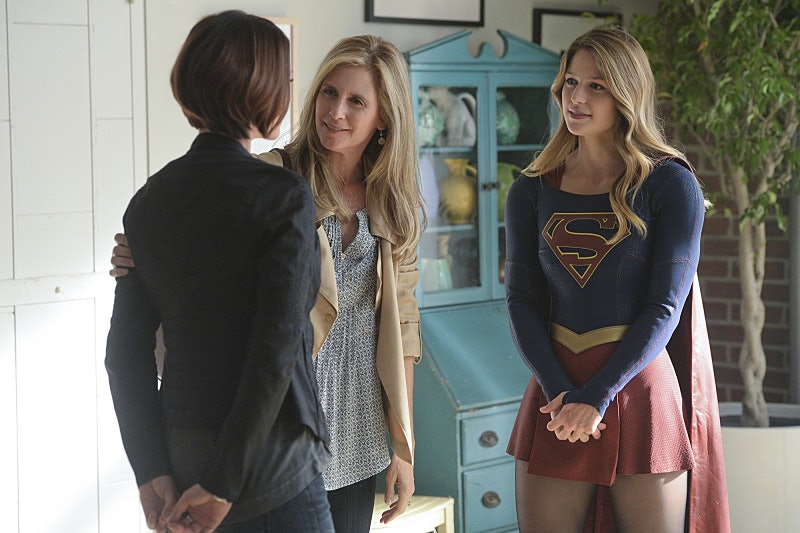 Thanks to the success of The CW's Arrow and The Flash, fans of superhero TV shows are already comfortable seeing a shared universe, as well as an expansive Multiverse, where characters from different shows frequently appear or are referenced. While CBS' Supergirl shares their executive producer Greg Berlanti, the three shows are not currently slated for a crossover (that we know of), but that doesn't mean Kara Zor-El is all alone in her crime-fighting efforts. As the cousin of Superman, we can expect many classic Superman characters to crossover into Supergirl, such as Ben Krull, aka Reactron, who will appear in this week's "Fight or Flight."

Of course, the greatest example so far of a character traditionally associated with Superman joining Kara on CBS is James-don't-call-me-Jimmy Olsen, who has moved from the Daily Planet over to CatCo both to take photographs and keep an eye on Kara. However, it's not just the good guys coming to National City, as a few of Superman's foes are on the way with much less honorable intentions. When Reactron, one of Superman's enemies from DC Comics, makes his debut, he may be looking for revenge by defeating Clark's cousin.

Based on the video above, we now know that Kara broadcasts the fact that she and the Man of Steel are related to the entire world during an interview with Cat Grant. Though with the matching outfits and supernatural abilities, it should be pretty obvious that the two are somehow connected. So, between her admission and their matching "S" symbols, Kara joins Lois Lane as one of the few targets for all of Superman's enemies. They now have someone new to go after to hurt him, as if Kara didn't already have enough problems.

While we don't know exactly what role Reactron will play in the show, if he comes for Kara out of his resentment for Superman or an entirely different motive, we can look for clues in his comic book history. Krull has appeared in numerous DC comics including The Daring New Adventures of Supergirl #8 and Superman: New Krypton, as a solider who gained his powers while fighting in the Vietnam war. Due to radiation exposure he has the ability to generate lethal radiation in focused blasts, making him an imminently dangerous foe to both Superman and Supergirl.

Reactron will also interact with Maxwell Lord (Peter Facinelli), as his suit is critically damaged and he needs Lord's expertise to fix it, whether Lord is willing to help or not. For a better look at both Reactron and Lord, check out this Supergirl excerpt from IGN below, and get ready to watch Kara take on a new foe. Hopefully, she'll defeat Krull so badly, the rest of Superman's enemies will think twice before going after another member of the House of El.