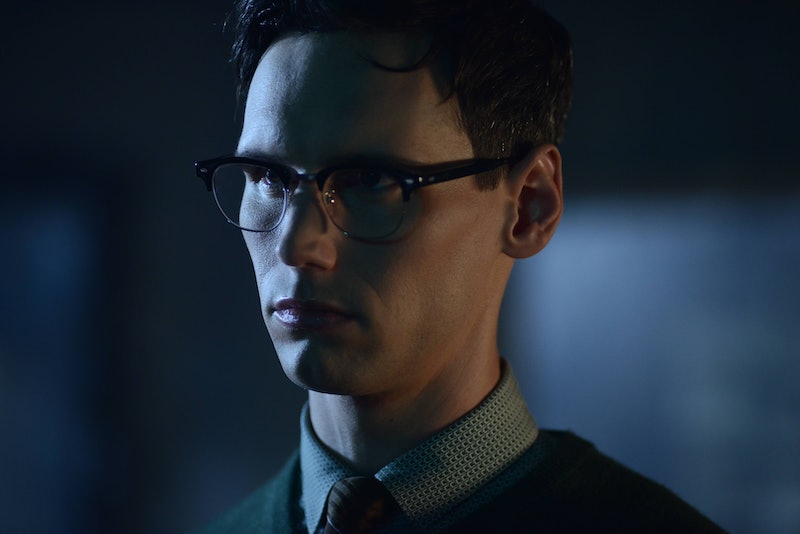 Edward has gone full Nygma on Gotham, with the gentler side of his personality fully giving in to his inner Mr. Hyde. Edward Nygma is now the Riddler, at least in method. In last Monday's episode, his sadistic side hid outside of the forensic scientist's consciousness to distribute Miss Kringle's remains and used the creepiest scavenger hunt ever to assert his total dominance. Fans have watched Edward struggle with his impending madness since the first season of the show; now the embryonic villain is hurtling towards becoming the Riddler they know and love from DC universe. And according to actor Cory Michael Smith's interview with TVLine, Edward is going to link up with Oswald Cobblepot on Gotham to take his bad guy status to the next level. And their alliance could mean the end of Theo Galavan's reign of terror.

In the interview with TVLine, Smith hinted at an epic villainous team-up between the two, who — along with Barbara Kean — are the most entertaining baddies to come up through the Gotham mythology so far. How and where do Nygma and Cobblepot bond over their shared interest in stirring up fear and mayhem in their fair city? Smith isn't giving specifics, but it sounds like a location that might be new to the show.

Penguin is not in good health, and the ever-caring Ed finds him at an opportune time. Ed’s going to save his life, and where they run into each other is outside the city limits.

So, not only will Nygma and Cobblepot spend some QT with each other soon, but Nygma will do the other villain a big solid. The events Smith described are coming up in the Nov. 16 outing, "A Bitter Pill To Swallow," so there's a whole episode to get Oswald to the point of needing Edward's help. Penguin started this season on top of the heap in Gotham and it's been a swift and painful fall to powerlessness since then. What distress will Nygma find him in I don't know, but my guess is that, after losing Butch, Cobblepot will be all too eager to offer his loyalty in exchange for someone else's.

An alliance between Nygma and Cobblepot is bad news for Gordon and GCPD for sure, but it might be worse news more immediately for Theo Galavan and his dusty vendetta against the Wayne family. I have to note that both Edward and Oswald each recently lost the only person in the world that he loved. And though Nygma can only blame himself, Cobblepot must blame Galavan. There are no lengths that Penguin won't go to avenge his mother; and that's the surest sign that Theo is going down.

What would Nygma get out of it? If Penguin is able to offer him room to play and a little protection, the Riddler will be able to act out his new identity more freely than if he were working alone. Anyway, he needs to hone his whole trickster persona before Bruce Wayne grows up.

This twisted marriage of minds is happening on Gotham for certain. What remains to be seen is what destruction a team-up of Penguin and the Riddler will leave in its wake.