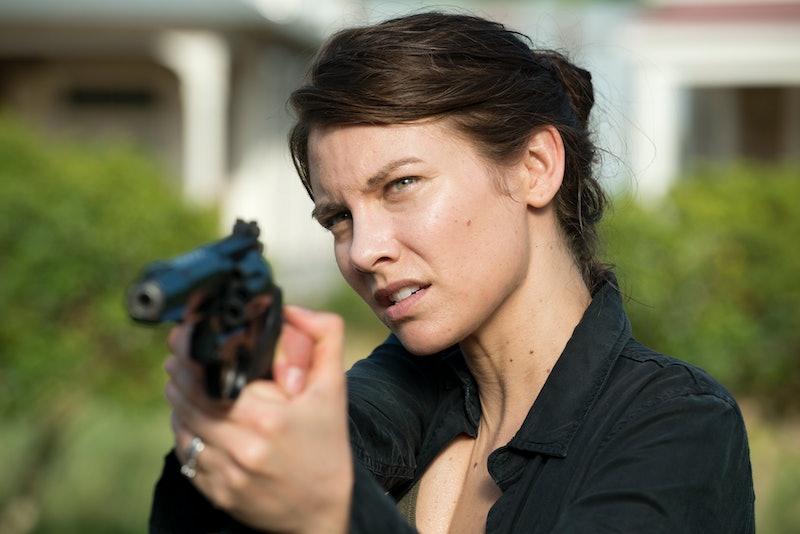 We still don't know for certain what happened to Glenn at the dumpster, but Sunday's episode of The Walking Dead gave us some new information that makes a resolution even more vital. While off searching for him in the sewers of Virginia with Aaron, Maggie revealed that she's pregnant on The Walking Dead. Were you expecting to see Glenn down in that sewer, like some kind of Jean Valjean? It totally makes sense to place dumpsters over grates. However, now that we know Glenn is an expecting father, it makes this whole situation scarier for both him and Maggie.

However, this news isn't too surprising. At this point in the comics, Maggie Greene is pregnant as well. While it was the first time she has said it out loud on the AMC series, it's likely that Glenn knew about their future child. Her conversation with Aaron was vague on the subject, though it seemed as if he must have known, by the way he asked Maggie to stay behind during the assault on the raid, as Vanity Fair pointed out. That's probably what they were alluding to in the premiere. She went out looking for him with Aaron "just to see his face," which was heartbreaking.

Wait. Wait. Wait. Does this mean that the "Glenn, some version of Glenn, or parts of Glenn" bit from Scott Gimple's statement on his possible death was referring to Glenn's child?! If so, that'd be a bit cruel.

While we wait to find that out, I'd like to take a page from Aaron's book and focus on what Maggie's baby could be named, Albus Severus-style. The former recruiter has already put his name in the hat for either gender. We have Glenn, and also Glenda. There are members of the Greene family galore, from Hershel to Beth, and even Maggie's brother Shawn. She could even name a child after Noah or Lori. She could also be named Alex after their current location — though I'm not sure Alexandria deserves that honor at this point.

All in all, Aaron and Maggie haven't given up hope that Glenn and the others are alive, and neither should we. At the end of the episode, they erased the unconfirmed names from Alexandria's new "In Memoriam" wall. It is fitting, because babies represent hope in a lot of ways. I just hope that Glenn is around to meet his child.