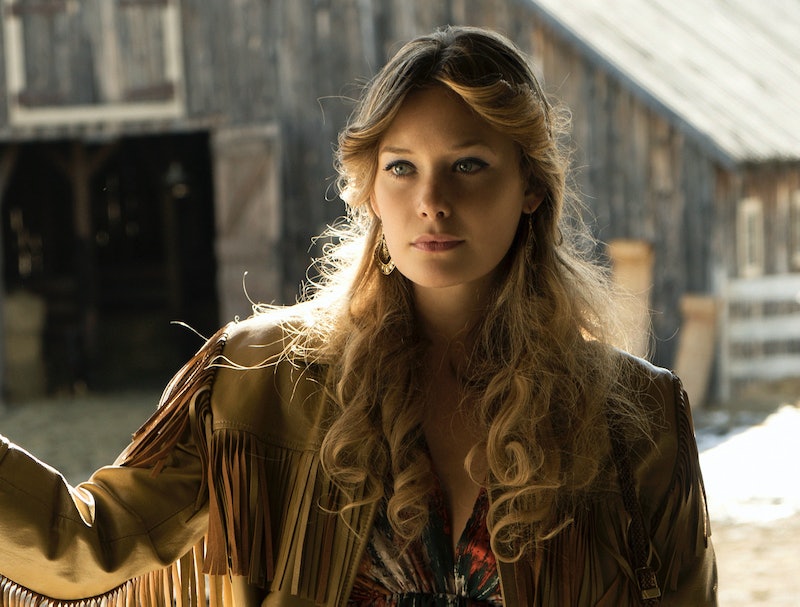 One of Fargo's greatest assets is also one of its biggest liabilities: Its big cast of characters. It's hard to keep Fargo's thugs straight from the Kansas City gang, and there are so many Gerhardts running around that it's hard to keep track of who is who and how they're all related to each other. Just when I thought I was starting to get it all straight, along comes a younger, blonder Gerhardt talking about how much she misses the '60s. Before Fargo gets all distracted by a visit from Ronald Reagan — played by Ash vs. Evil Dead's Bruce Campbell! — on November 9, I figured I had to put a name to her face. So, who is Fargo 's Simone Gerhardt?

Simone is part of the third generation of Gerhardts, being the daughter of Dodd (the super-violent one played by Jeffrey Donovan). I think that's what confused me so much about her at first; she looks about the same age as Rye, but he's really her uncle, not an older brother or cousin. Here are some reasons why the people of Fargo — and all of the viewers at home — better watch out for her. (Beware of spoilers if you're not caught up on the season so far.)

Fargo is a noir first and foremost, and Simone is the girl running around and getting everyone into trouble. Remember that poor typewriter salesman who ended up buried in asphalt? It was Simone who lured him in and turned him over to her (psychotic) father, basically giving the Gerhardt family their biggest lead into the whereabouts of Rye (before, you know, the whole asphalt thing).

She's Sleeping With The Enemy

Even though Simone is helping her family track down Rye (to the extent that he can be tracked down), she's playing both sides of the Fargo/Kansas City skirmish. She's sleeping with KC's Mike Milligan, subtly feeding him information that affects his dealings with the Gerhardt clan (usually to the detriment of the Gerhardts). Contrast that with another third-generation Gerhardt, Chris, Bear's son. (I told you there were a lot of Gerhardts running around.) Chris wants to have power and influence in the family and tries to prove his mettle to his dad and uncles; Simone already wields power.

Dodd has four kids — all of them daughters. Simone is the oldest, and that's not the only way she resembles her dad. Like him, she's strong, stubborn, and has a rebellious hot streak. Looks like Dodd has got his hands full.

Her Accent Is Legit

Simone is played by Rachel Keller — who's tackling her first meaty role with the show — a real native of St. Paul, Minnesota. The way she sounds... is the way she sounds. "The dialect coach and I had a blast," she told TwinCities.com. "He would ask me sometimes, 'How would you say this? How would your family say it?' It's funny because at Carnegie Mellon, they try to beat your accent out of you so that you don't sound like you come from anywhere. And this, my first job, required me to go back to my original accent."

Fringe? High-waisted pants? Big hair? Long, red nails? Simone is the one to watch for totally cool, '70s, teenage-rebellion-against-gangster-dad getups, which beats the Midwestern sweater any day. Where did Keller get the inspiration? "That was one of my best parts of research, looking at these Polaroids of my mom," she told MPR News. Hopefully, her mom wasn't raised by a Dodd!