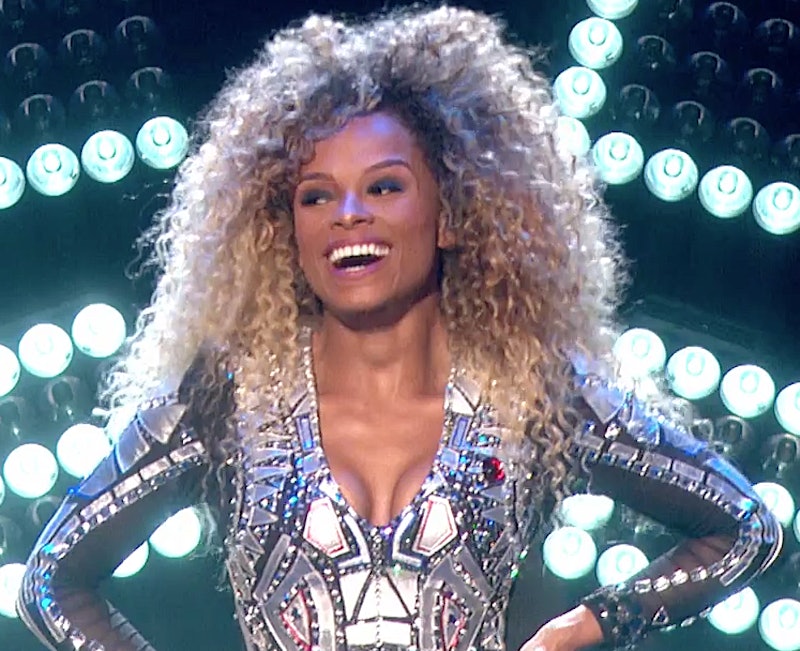 Get ready to meet your new musical obsession: On Sunday, former X Factor UK contestant Fleur East returned to the popular reality series to perform her new single, "Sax" — and she blew the roof off the joint. I'm not exaggerating when I write that Fleur East's "Sax" performance on X Factor UK is without a doubt one of the most electrifying and entertaining live television performances I've ever seen. I don't know if "Sax" will be getting a stateside push from East's record label, Syco, but if you're a pop music lover, she's definitely an artist you need to have on your radar.

East finished in second place on Season 11 of X Factor UK in 2014 (which is absolutely mystifying to me, because she has more "x factor" in her little finger than most contestants have in their entire bodies... but, I digress). One of East's most memorable moments on the show was her show-stopping rendition of Mark Ronson and Bruno Mars' "Uptown Funk." So, it comes as no surprise then that "Sax" sounds a bit like "Uptown Funk's" glossier, pop-ier older sister.

When East took the stage to perform the explosive tune on Sunday evening, she oozed star power. With every playful toss of her hair and expertly executed piece of choreography, she had the audience mesmerized. Check out the 28-year-old singer's astonishing "Sax" performance below.

How many times did you watch the video? Three times? Four times? Be honest. And can you even believe that trust fall at the 3:09 mark?

She's both talented and fearless! East's debut album, Love, Sax and Flashbacks , is set to premiere on Dec. 4. Hopefully, the LP will get a U.S. release at some point, because I'm dying to hear more material from her. In the meantime, I'll have her "Sax" performance on repeat. I don't think I'm going to get tired of it anytime soon.