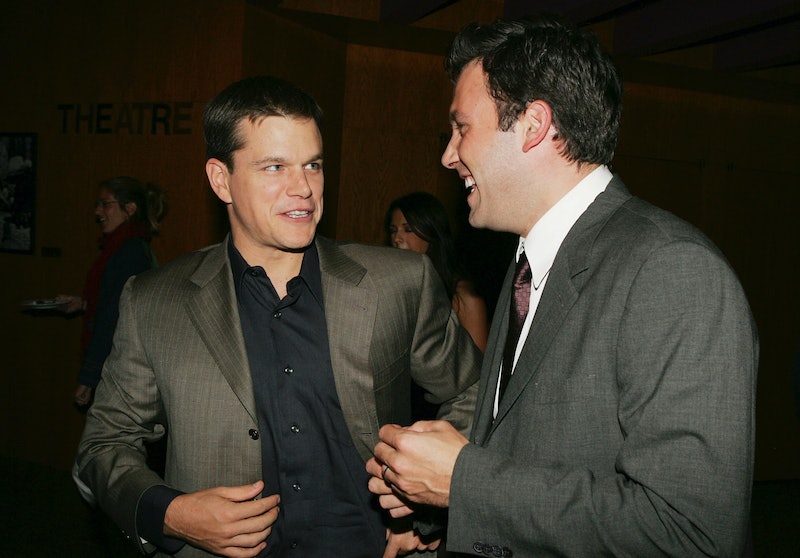 According to reports, Ben Affleck and Matt Damon — aka the best bromance in the history of Hollywood — will present at the 2014 Golden Globes. We're excited for the actors to present an award together, especially since the two also happened to have accepted a Golden Globe award for their Best Screenplay for their breakout film Good Will Hunting in 1998. While we're thrilled that this two will take the stage together, we'd be even more excited if the pair was offered a hosting gig for 2016. Though Amy Poehler and Tina Fey will rock the 2014 AND 2015 Golden Globes, we think that the 2016 awards should be hosted by these two stars. Here's why we think that Ben Affleck and Matt Damon should host the gig.

We love Tina Fey and Amy Poehler for making us laugh on TV, but we think that the 2016 Golden Globes should change it up and focus on the movies that will be taking home awards that night. Ben Affleck just won an Oscar for Argo and Matt Damon had success with films like Elysium earlier last year. In 2014 Damon will star in the highly anticipated World War II picture The Monuments Men while Affleck will take on the starring role in David Fincher's adaption of Gone Girl.

2. Their Chemistry Is Great

Onscreen and off, these two are a dynamic duo. Like Amy and Tina, these two won't need to spend much time rehearsing for this hosting gig — they already work so well off of one another and have collaborated together for so long, there's simply no way that they'll be an awkward team. (Unlike, say, Hathaway and Franco at the Oscars... yikes).

3. They Haven't Teamed Up In A While

Though these two won an Oscar together and collaborated in several films, they haven't done anything major together in a longtime. Isn't it about time that we put these two on a project together? That's where the magic happens, people.

Though these two are better known for their serious dramas, at one point they starred in comedies together. My favorite? The extremely weird (but kind of brilliant) Kevin Smith film, Dogma, where they play fallen angels searching for a way to get back into heaven.