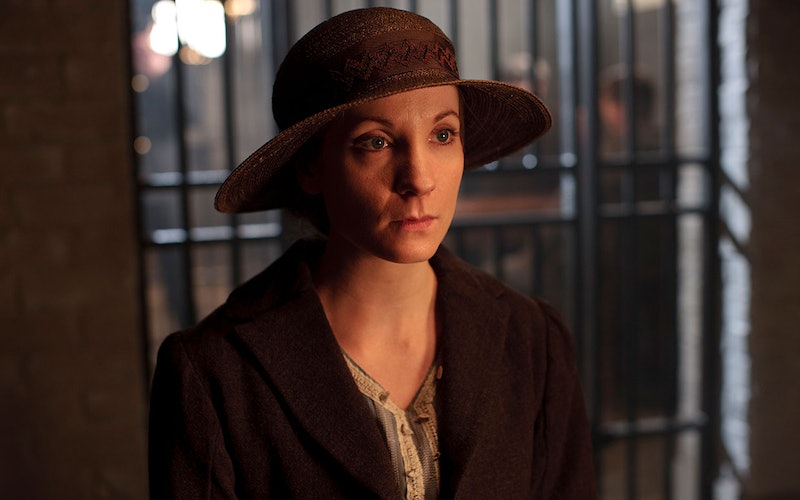 That was horrible. My stomach turned. I cried. I didn’t want to see or hear that. WHY DOWNTON ABBEY WHY? Before anything else, we need to address the absolute horror that was Anna Bates being beaten and raped by the awful Mr.Green/Gillingham — all while the rest of Downton was upstairs listening to a concert, having Anna’s cries for help be drowned out by the sounds of an Australian opera singer. Then there was the horrible, heartbreaking aftermath: Anna stooped crying and shattered in a corner, begging Mrs. Hughes for help and too ashamed to let anyone, especially her husband, know of the awful truth. My ears went hot, my heart sank to the very bottom of my stomach, and I wondered how in the hell the rest of the episode could just carry on after a scene like that.

In effect, everything else that happened in Sunday’s episode felt trivial, and perhaps, that was part of the point. All of the fuss over throwing a party and having a dozen or so guests stay at the Abbey — would there be enough staff? Where should the singer and her accompanist sleep and dine? What to do with poor old lady Raven? Irrelevant, frivolous, exhausting. But nevertheless, these things happened. So let’s all try to keep an English stiff upper lip as we recap, shall we?

At the start of a very choppy and fast-paced episode, a bevy of the fanciest coaches arrived to Downton carrying a gaggle of guests including a Duchess, a card shark, and someone Rose was all googly-eyed over (his name was Sir John Bullock, in case you missed it). And then, of course, there was Antony Foyle aka Lord Gillingham aka “a fancy pirate.” He was a most-welcomed guest to Downton and an old childhood friend of Mary’s — though I don’t quite approve of his intentions. He was all too eager to spend time with Mary, go riding, and made an insensitive remark about the dearly departed Matthew. Both Lord and Mr. Gillingham (confusing enough for you?) can leave Downton forever, please and thank you.

Upstairs things were fancy and formal. Poor Tom spent the entire affair feeling like a poor fish out of some very rich (purified from an Icelandic stream, probably) water. Leave it to Edna to swoop in and take advantage of his sad sack state. She asked the awkward and unnerving question as to whether or not they could still be friends. And like a politician Tom replied that they “weren’t enemies.” Cripes man, get it together.

Mary continued to quarrel with dear Papa over affairs of the estate. Between multi-course meals, Violet’s never-ending sass (“not everyone can be Oscar Wilde,” … “that’s a relief”) and some bum poker games, we learn that selling the land will pay off the taxes, but without the land, they cannot keep up the house. Lord Fancy Pirate had a few ideas to remedy the problem. But really, who should trust him over Papa? *cough* Someone in an emotionally vulnerable place, that’s who! *cough*

Mary isn’t the only one driving Lord Grantham to the library for a drink. He spends much of the affair avoiding Michael: refusing walks with him and Edith, rolling his eyes at sharing a card game, and being polite and awkward only in a way that the English could pull off in tuxedos. Grantham’s manners are perhaps worse when it comes to Nellie Melba, the Australian opera singer. Once he gets over the modern insanity that is sharing a meal with an artist, he continues to insult the woman by belittling her wine knowledge at the table. Heavens, Robert.

Rose also continued being awful by bringing down Matthew’s gramophone so she could throw a little dance party for herself. Anna told her to ask Mary first before bringing it down, but of course, she didn’t, because she is the worst, and Mary’s brief moment of relaxation was ruined at the sight of it.

Downstairs Thomas is still insisting everyone call him Barrow now that he’s the Under Butler and throws a fit when he must serve as a footman. Jimmy rather brashly called himself a “real man” when opening a stubborn jar for Daisy, and then slipped and twisted his wrist. This does however leave room for extra needed help, and in comes, running very awkwardly, dear Molesley fresh off his other gig as a ...delivery boy. Oh, MOLESLEY! The shade Carson throws him at dinner service when he speaks to Lady Violet is priceless.

And then... there’s... Green. Things start off suspiciously. He’s a bit too comfortable and “friendly” around Anna which does not go unnoticed by Bates. His frustration with the matters becomes even more clear when Green instigates a loud card game that whips up the young staff into a frenzy. So much so that no one heard the news of Mrs. Patmore falling ill/nearly giving herself a heart attack over the big dinner and bechamel sauce. It was expertly finished by Alfred, by the by.

Mrs. Crawley also managed to find the strength to sit through the final formal dinner and concert even though she felt she was being untrue to her grief in doing so. She watched Mary laugh and enjoy herself at the meal and felt sick about it. Tom may not know how to talk to the upper class about upper class things, but he certainly knew how to offer kindness and empathy. Unfortunately his do-goodery was all too brief. At the end of the night he sat exhausted and defeated in the hall. Edna approached with a large glass of whiskey. He looked up meagerly, “You understand me, don’t you?” And then later she opened his door in the middle of the night and let herself in. Welp, that didn’t take long.

Lastly, Anna left during the concert to get some medicine for a headache. She said it was probably due to all of the shouting from the card game and she raised a brow to Bates to not say a word of it. As she was pouring herself a glass of water, Green skulked into the kitchen and cornered her. He told her that he was the kind of fun she was looking for and that a crippled old man like Bates couldn’t possibly keep her happy. And after she refused quite loudly and firmly, he punched her, he grabbed her, and things got very, very dark. Sounds of her screaming shot back and forth between the dark chambers and the serene and bright parlor upstairs where everyone is enjoying a bit of opera while Anna is being raped downstairs. And what’s worse, they close in on Bates suggesting to Carson that she must have fallen asleep... or something. And then Green walks in to the parlor and adjusts his trousers as he sits down. And we all collectively threw up in our mouths.

Mrs. Hughes finds Anna crying and cowering in the corner of her office begging for some new clothes. Mrs. Hughes tries to fetch the doctor and Bates, but Anna demands that no one must know. She fears that if Bates were to find out, he’d kill Green (damn right!) and since he’s already a convicted felon, he’d be hanged for it. She’s too shocked and ashamed to let anyone know. And when Bates finally does find his way to Anna, he sees the blood, and bruises, and her clothing, and knows something is wrong. But she sticks to her story (that she fainted and hit her face on a counter on the way down). As they are having this conversation, Green disgustingly bids them both a good night. Anna can’t even bear to let her own husband touch her skin. And so she walks alone into the darkness.

After this we are supposed to mildly give a crap that Michael won back the previous night’s poker losses and gives back everyone’s debts as to make good with Lord Grantham. And this is where the episode lost me. How was there still 5-10 minutes remaining after what happened to Anna? Why were we asked to watch the upper-class exchange niceties after Anna was raped? I could go on for ages about the overarching metaphor of a woman not being heard despite her screaming — that Anna was literally in the basement of the lower class, representing just how low women are regarded. I could go on and on about how Anna’s shame is representative of how rape victims are made to feel about themselves. About how Green so succinctly expelled the forceful entitlement rapists feel over their victims. But then I think about the way Anna clutched to her stomach, knowing what was there, and my heart ached.

More like this
Everything You Need To Remember Before Westworld Season 4
By Brad Witter
“The Door Is Always Open” For Another 'Breaking Bad' Spin-Off, Says AMC Boss
By El Hunt
Martin Hancock’s Wife Played A Key Part In His Return To 'Coronation Street'
By Catharina Cheung
Paapa Essiedu Likes To Keep His Relationship Pretty Private
By Maxine Harrison
Get Even More From Bustle — Sign Up For The Newsletter