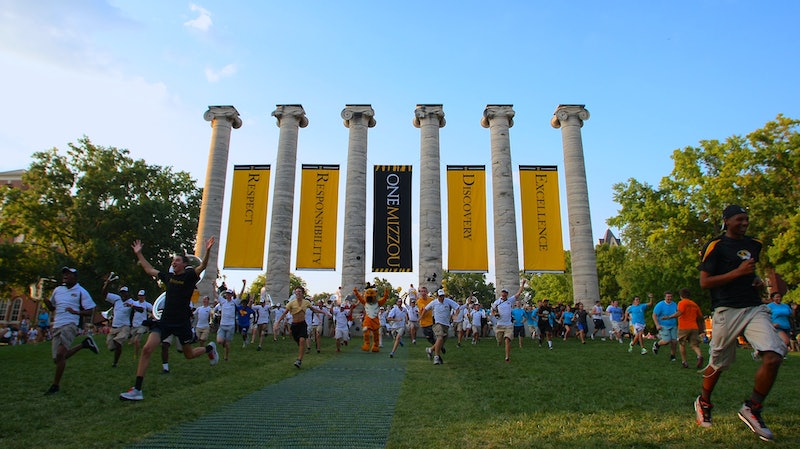 Weeks of mounting pressure from students and faculty have resulted in University of Missouri system president's Tim Wolfe's resignation Monday morning. It was the ending that protesters called for, but their victory was not achieved without a long and difficult fight, during which one student nearly starved to death and the university almost lost its football team. Through it all, one group stood out for spearheading the campus-wide protests and drafting demands that are now being considered by the state's top lawmakers. So who are the University of Missouri's Concerned Student 1950? The activist group has led in the fight to end racial hostility in the institution.

President Wolfe's resignation announcement comes after the faculty threatened to stage a campus-wide walkout and the school's football team, the Missouri Tigers, vowed to boycott all football-related activities. However, the situation would not have escalated to this point, or garnered national attention, without the protests organized by Concerned Student 1950. The activist group has been peacefully demonstrating since Missouri Students Association President Payton Head, who is black, was called a racial slur by a group passing by in a pickup truck in September.

After that incident, the Legion of Black Collegians, a student government organization at the university, was rehearsing for the Homecoming Parade when an apparently drunk white student yelled racial slurs at them. On the night of Homecoming, the LBC confronted Wolfe in his car to protest, but the president refused to address them.

By this time, the protesters were known as Concerned Student 1950.

What Is Concerned Student 1950 All About?

The activist group was formed to fight back against the racial hostility that has been allowed to persist on the University of Missouri's campus without any response or plan of action. Since Head posted on Facebook about his incident, protesters have organized "Racism Lives Here" rallies and peaceful demonstrations from Concerned Student 1950. During one of the latter, an organizer asked the crowd, "Do you know why we want to get Tim Wolfe out of here?" The response:

Another chant that the group has used comes from an Assata Shakur poem:

What's The Significance Behind Its Name?

The group's name, Concerned Student 1950, refers to the year the University of Missouri admitted its first black student, and pays homage to this historic moment.

How Have They Contributed To Tim Wolfe's Resignation?

Besides orchestrating sit-ins and other nonviolent protests, the group's members have also been "boycotting spending money at the Student Center ... boycotting football games — anything that brings the university extra money, until everything is resolved," according to member Storm Ervin. The group also aligned themselves with Jonathan Butler, a graduate student who started a hunger strike to call for Wolfe to step down. He had asserted that the strike would either end with Wolfe's resignation or his own death. Immediately, Concerned Student 1950 rallied around Butler. Ervin told the Columbia Missourian:

We want the student body and the administration to know that we are calling for UM System President Tim Wolfe to step down or we risk losing a student.

Furthermore, the group also started a Change.org petition asking for Wolfe to step down. By Monday, the petition had garnered more than 7,100 signatures, just 400 shy of its goal.

What Are They Demanding?

On Oct. 20, the group issued a list of demands to the university. Besides calling for Wolfe to resign, the group also urged him to issue a written apology to the demonstrators — one of whom the group says he hit with his car — acknowledge his "white male privilege," and "admit to his gross negligence."

The group also demanded that all future University of Missouri system presidents and Chancellors be selected by "a collective of students, staff, and faculty of diverse backgrounds." They also demanded a 10 percent increase in African-American faculty and staff by the 2017-2018 academic year, and a 10-year plan by 2016 to increase the retention rate of minority students, maintain the diversity training and curriculum, and promote an overall safer and more inclusive campus. You can read all of their demands here.

Missouri Attorney General Chris Koster has called for a task force to address the group's demands, proving that their cause is an urgent and important one.