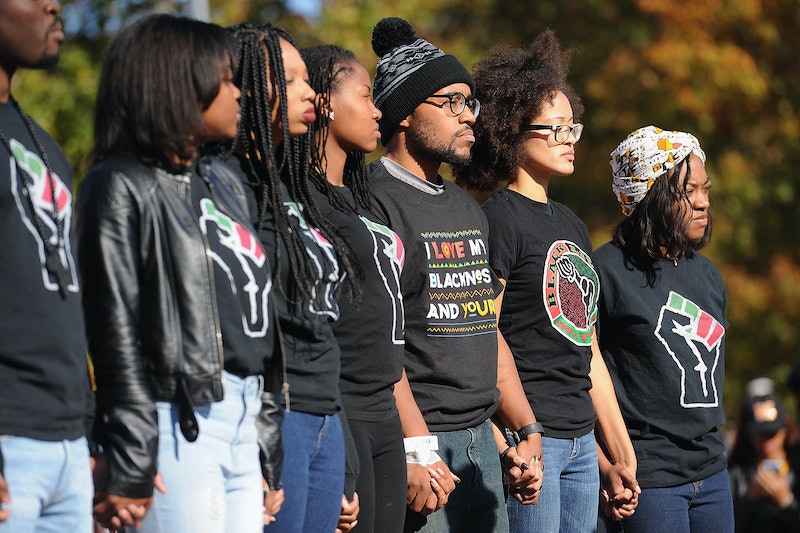 While the resignation of University of Missouri System President Tim Wolfe on Monday made national headlines, it was the result of weeks of events that led up to his decision. Students first demanded Wolfe resign in mid-October, and on Monday those students celebrated their success. Among these students are the major players in the months-long struggle: student body president Payton Head; Jonathan Butler, who endured a week-long hunger strike; and members of the school's football team, who refused to play until Wolfe stepped down. Their combined efforts brought national media attention to the university, but a timeline of Missouri events shows that Wolfe's resignation will not be the end of the campus-wide discussion about discrimination and racism.

At the University of Missouri campus in Columbia, Missouri, the student body is 79 percent white and 8 percent black, according to the Chicago Tribune. Student activists believe a number of reported incidents of racism, homophobia, and gender discrimination were unsatisfactorily answered by administrators. Although some students on Monday celebrated Wolfe's resignation as a victory, a change in administration alone will not bring about the shift in campus culture that protesters are hoping for. Ex-Missouri basketball player Kim English tweeted that "oppression at my alma mater and in the state of my alma mater occurred LONG before the tenure of this System President," and other students took to the Internet to share their stories of racist encounters. By taking a close look at the events that led up to Monday, it's clear that Wolfe's resignation is only a band-aid for a much deeper problem.

University student president Payton Head was walking on campus with a friend on Friday night when students in a red truck shouted racial slurs at them. In a Facebook post that quickly went viral, Head wrote "I really just want to know why my simple existence is such a threat to society." Other students responded with their own experiences of racism on campus. His post gained national attention when the St. Louis Post-Dispatch shared it with its readers.

A group of students called Concerned Student 1950, named after the year when the first black student was admitted to the university, protested at the Homecoming parade and blocked a convertible carrying Wolfe. They claimed the administration was not taking concrete steps to address racism and discrimination on campus.

Concerned Student 1950 demanded Wolfe's resignation in a statement of demands to increase racial justice on campus.

Somebody vandalized a university dorm at 2 a.m. Saturday when he or she painted a swastika on the wall with human feces.

Graduate student Jonathan Butler posted a letter on Facebook announcing he would not eat until Wolfe stepped down. He would continue his hunger strike until the following Monday.

Concerned Student 1950 gathered with supporters to protest the administration's response to repeated incidents of discrimination and racism on campus. They gathered at the school's Traditions Plaza, according to NBC News. Supporting Butler, they vowed not to leave until Wolfe was removed, and set up tents to camp out.

The major blow to the university's administration came over the weekend, when, in solidarity with the protesters, members of the school's football team announced it would not play games or participate in any football-related activities until Wolfe resigned. The impact was enormous: on Friday, a few hundred tweets had been posted about the university, The Washington Post reports. By Sunday, there were almost 16,000. If they had continued their boycott, the Missouri Tigers would have forfeited an upcoming game against Brigham Young University, for which the University of Missouri would have had to pay a $1 million fine.

The team's coach Gary Pinkel supported the decision of his players.

Wolfe released a statement to the campus in which he stated, "My administration has been meeting around the clock and has been doing a tremendous amount of reflection on how to address these complex matters." To the dismay of protesters, however, he did not announce his resignation. The Columbia Missourian reports more students joined the protesters on Sunday after Wolfe's announcement.

A pickup truck flying a confederate flag tried to intimidate student protesters that day. There was an increase of local and national media presence. Loftin came to speak with students and supplied protesters with four propane heaters.

A group of professors and faculty members at the university encouraged the entire university staff to cancel classes Monday and Tuesday, and recommended they instead organize teach-ins alongside the student protests to encourage dialogue about racial injustice, USA Today reports.

"We, the concerned faculty of the University of Missouri, stand in solidarity with the Mizzou student activists who are advocating for racial justice on our campus and urge all MU faculty to demonstrate their support by walking out," said Elisa Glick, an associate professor and member of The Concerned Faculty.