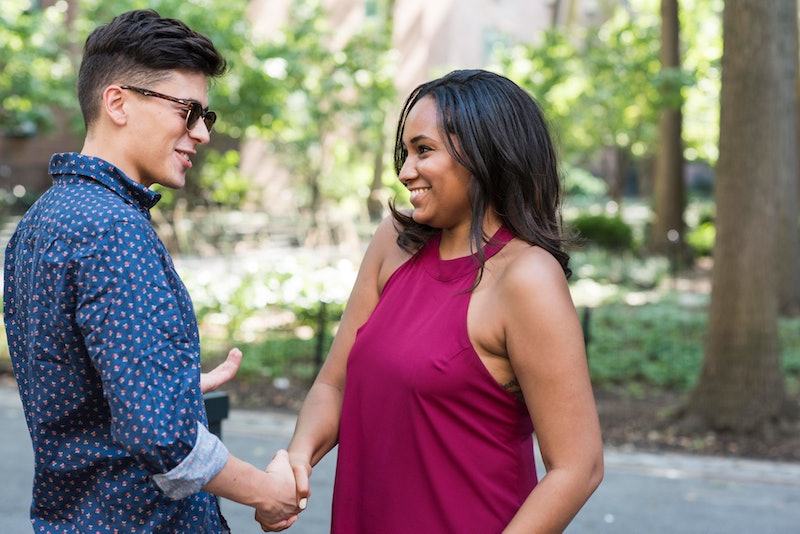 You've spotted somebody across the bar, library, or coffee-shop meet-up of fans of obscure Japanese anime. They're seriously, outrageously hot, and once you've begun a conversation, you start to feel — peculiar. But stereotypes of what happens in the body when you're feeling sexually attracted to somebody — blushing, freaking out, stuttering — are actually rarely close to the truth. The reality of bodily manifestations of attraction is often far weirder, and more neurologically complex, than it appears. Mirroring their every movement, anybody?

A lot of science about attraction focuses on why we feel attracted to the people that we do, and whether certain kinds of human are just evolutionarily more attractive than others. This is certainly a pretty mystifying area — why do some people love hipster indie boys with the muscle mass of a cheese slice and others fall over flat for giant dudes who could bench press them? — but it's certainly not the whole story. Picking where your attraction falls is the first part; what happens next is a journey into how the body rewards itself, develops obsessions, bonds with others, and possibly sabotages its own happiness. That sense of ridiculous holy-hell-I-need-this-person-now is a very powerful cocktail and it affects many different parts of your body and brain.

It's likely that you don't need to be told whether you're attracted to somebody; your body and brain will likely communicate that very clearly. But the idea that you can automatically pick up whether somebody's attracted to you via these signs alone isn't quite viable, because so many of them are internal. Here are five things that happen to your body when you experience sexual attraction.

This is a pretty tell-tale sign, to be honest. It's something that signifies interest and attention throughout our lives, and is actually one of the first ways in which we can express our preferences for one thing over another. Many of the experiments on babies and their likes and dislikes are conducted by observing what they're looking at when their pupils dilate. That action expresses interest and affection — their eyes dilate like hell when they look at their parents or attractive faces — and we think they're cuter when their eyes are big and round, so it's a two-way bonding process.

Pupil dilation is a basic way of getting as much information about something as possible: it's why you see your cat's eyes suddenly become pools of black when they're hunting your shoe. You're absorbing your "prey," as it were. It's also tied to plain old sexual arousal itself, whether you're watching something or somebody sexy.

2. Your Body Synchronizes With Your Target

This aspect of attraction is, frankly, a little freaky. If you're communicating with the object of your fascination — talking in close quarters — chances are strong that you'll start unconsciously mimicking them on a very deep level. It's something called interactional synchrony, and it's a primary way in which humans bond: we imitate. I don't just mean following them around — I mean mirroring everything, from their stance to their facial expressions to their speech patterns. If they're into you too, it's pretty intensely reciprocated.

And it happens fast — you can adjust your body and facial expressions in as little as a 20th of a second. Interactional synchrony isn't just about attraction, though; it's one of the ways in which we bond as people, so you'll often find yourself doing it, to a lesser extent, in conversation with friends, family, even acquaintances. Imitation really is the sincerest form of flattery.

3. You May Sweat More

If you pay attention to the science of sexual attraction — which is largely focused on what factors attract certain people to others, from height to voice depth to hip width – you'll know that scent in sweat seems to have a pretty big role in unconscious attraction, particularly male sweat for straight females. Women, it turns out, can actually detect when a dude is turned on just by the scent of their sweat — which makes it easier to understand why we may sweat more when we're attracted to somebody.

We sweat for many reasons: it's an expression of stress and anxiety as well as a by-product of arousal. Sweat produced as a sexy side-affect isn't done by the same glands you use when you're trying not to overheat, but by the apocrine glands, which produce sweat mixed with steroids and other things possibly designed to incite excitement in a target. Be assured that your sweatiness likely isn't turning your date off. If they're into you, they'll like those pheromones.

4. You Experience A Dopamine High

If there's one neurochemical likely responsible for the giddiness and teeth-grinding arousal of your attraction, it's dopamine. The feel-good neurotransmitter, as it's called, is one of the key signs of a sexually attracted, highly stimulated brain, giving you a sensation of bliss: it's one of the brain's ways of signalling that it's anticipating a reward.

Dopamine has a dark side, though. It's occasionally featured in investigations of how addiction works in the brain, and may, according to Psychology Today, account for the "obsessive" nature of early, deep romantic love, where your thoughts are literally consumed by the object of your affections. Your attention has been focused in a way that's basically addictive.

This is an interesting one, and may explain why depressives write such good love songs. The early stages of sexual attraction and serious love are associated, according to numerous studies rounded by Medscape, with lower levels of the neurotransmitter serotonin. This may account for some very interesting side affects: serotonin's associated with low mood if it's not appearing in the brain in sufficient quantities, and low levels of it are also associated with obsessive behavior (such as OCD). Hence the emotional roller coaster and serious obsession of full-on sexual attraction or young love. Whoops.

This has some clear knock-on affects on people who, like me, take SSRIS, or selective serotonin reuptake inhibitors, antidepressants designed to make the brain "take up" less serotonin and leave it hanging around. Higher levels of serotonin have already been linked to lower libido in general (it's a standard side affect), but they may actually blunt sexual attraction and make you less inclined to feel attracted to anyone in the first-place. So if you're on SSRIs and just can't get yourself to feel tear-your-clothes-off-crazy about your latest fling, relax: it may be your serotonin, not their lack of Ryan Reynolds abs. And also know that you have options when it comes to dealing with it.

More like this
Expert Tips For Being On Top When You're Plus-Size
By Lexi Inks
The Best Time To Date After A Breakup, According To Experts
By Bustle Editors
7 Women Share Their Best Orgasm Stories
By Lexi Inks
Hinge's New NFAQ Feature Is Demystifying Queer Dating
By Emma Carey
Get Even More From Bustle — Sign Up For The Newsletter