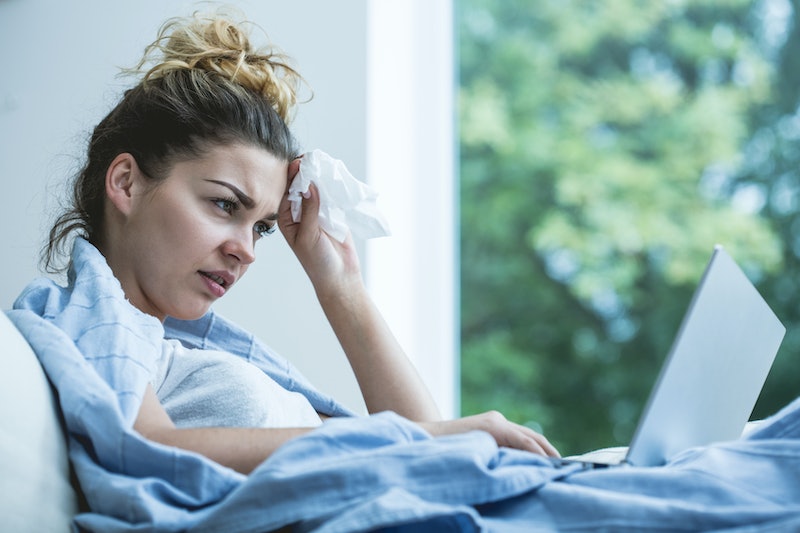 If you're sick on a work day, do you normally stay home and recover, or do you head into the office anyway, even though it's unlikely that you're going to be productive in your weakened state? If you're the kind of person who goes into work when they're sick, then you're engaging in what scientists call "presenteeism." And whether or not you're a presentee says a lot about both who you are and how you feel about work.

Dr. Mariella Miraglia of the University of East Anglia and Gary Johns of Concordia University were interested in why some people go the presentee route when they're sick, especially considering how doin' so is bad not only for you, but also for your co-workers. (Being in the office while you're sick means you're exposing everyone else to your germs.) So for their study, they conducted what's known as a meta-analysis — that is, they looked at data from a significant number of past studies on a subject and analyzed the overall data in order to draw larger conclusions. As you can probably imagine, meta-analyses are more precise in their findings, since they use a much larger data pool than those used in individual studies. The data pool for this particular piece included over 175,000 people who participated in 61 studies across 34 different countries. In order to get to the bottom of what all this data said, Dr. Miraglia developed a statistical tool that allowed the researchers to identify first the main causes of presenteeism, then the personality traits most associated with it.

They found that the variables most associated with presenteeism include "general ill health, constraints on absenteeism (e.g., strict absence policies, job insecurity), elevated job demands and felt stress, lack of job and personal resources, negative relational experiences (e.g., perceived discrimination), and positive attitudes (satisfaction, engagement, commitment)." The findings suggest that those those who are unable to lose income, or whose work environment is full of pressure or is understaffed, are a lot more likely to go into work while ill, while those with supportive managers and wellness programs are more likely to stay home. Additionally, experiencing personal conflict at work or at home also might make people more likely to be presentive, as not going to work could exacerbate negative consequences.

Interestingly, the findings also suggest that some people go to work while they're sick because they enjoy their jobs so much that they don't want to stay away (good in theory, but bad in practice!). So if you have a habit of engaging in presenteeism, you're probably one of two people. You're either stressed due to financial strain, working in a less-than-ideal environment, or engaged in conflict either at work or at home, or you just really love your job.

But presenteeism, even if it's coming from the "I just love my job so much" group, can have a lot of negative effects for both employees and workplaces. First off, "Working while ill can compound the effects of the initial illness and result in negative job attitudes and withdrawal from work." Furthermore, being sick and staying on the job will cut your productivity by at least a third. Research published in the Journal of the American Medical Association in 2004 found the cost of presenteeism to total over $150 billion in the United States each year.

Additionally, the amount of productivity lost to presenteeism is actually three times more than that resulting from employees just taking sick days. "That is, less time was actually lost from people staying home than from them showing up but not performing at the top of their game," Paul Hemp of the Harvard Business Review wrote at the time.

So what can we do about this problem? The researchers who performed this meta-analysis recommend that workplaces institute policies that alleviate some of the potential burdens that cause people to feel obligated to come into work when they aren't feeling well. “Organisations may benefit from well-designed jobs that limit the level of demands to which employees are exposed to every day, for example by reducing excessive workload, time pressure and overtime work, as well as making sure they have the resources they need," Dr. Miraglia said in the study's press release.

The moral of the story? Don't come into work when you're sick. You'll be doing yourself and everyone else a favor by staying home.

More like this
These Are The Fastest Electric Kettles You Can Buy
By Margeaux Baulch Klein
These 3 Signs Are The Master Chefs Of The Zodiac
By Kristine Fellizar
These 4 Zodiac Signs Make The Best Bridesmaids
By Nina Kahn
The Zodiac Sign Pairs Most Likely To Have A Sibling Rivalry
By Kristine Fellizar
Get Even More From Bustle — Sign Up For The Newsletter
From hair trends to relationship advice, our daily newsletter has everything you need to sound like a person who’s on TikTok, even if you aren’t.