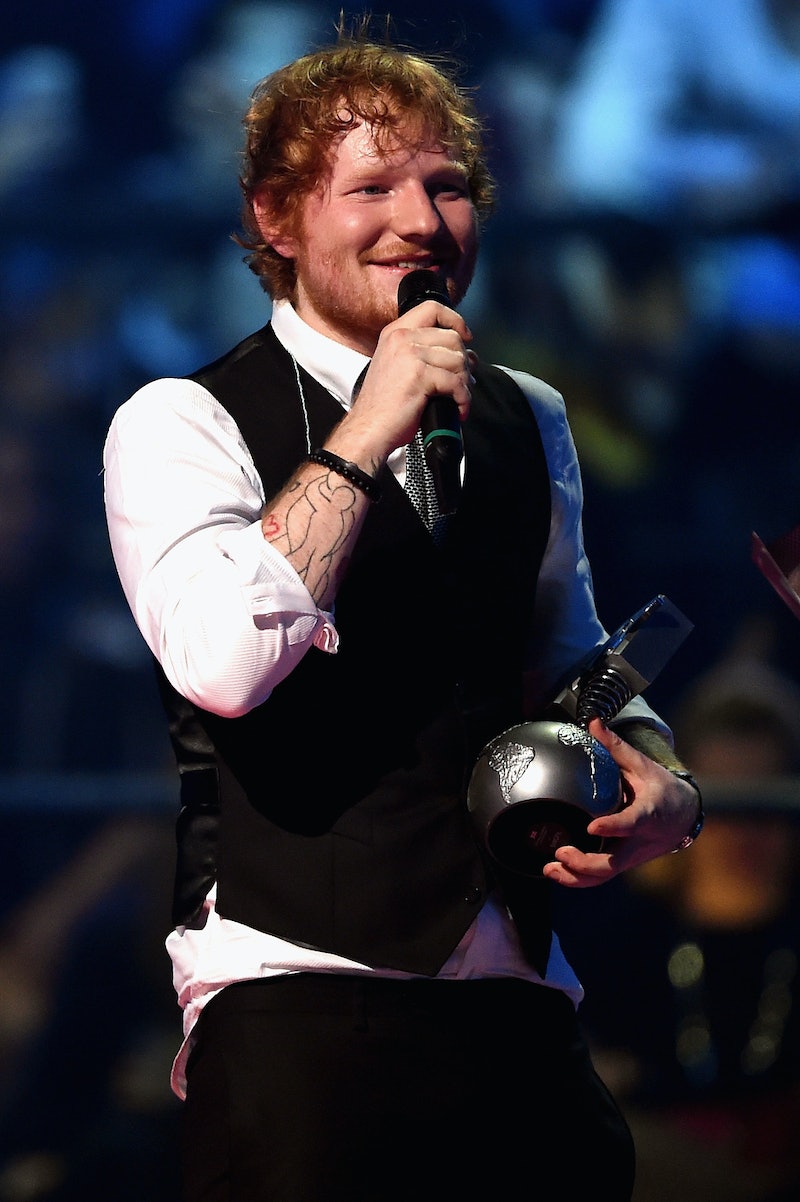 There's been some confusion about what Ed Sheeran's lion tattoo is really about, and it's time to put it to bed once and for all, thanks to words straight from the horse's mouth. Sheeran's been bandying us around for long enough, first showing an Instagram of his new ink, and then posting a photo of it all covered up and pretending he'd been kidding about it all along. We need answers, and luckily, we finally got them via Sheeran's recent appearance on The Ellen DeGeneres Show.

He was there to plug a new artist he's discovered, named Jamie Lawson, which is officially the best reason I've ever heard for someone to go on a talk show — plugging someone else! Incredible. But before he got to that business, he did some talking about himself, specifically giving us the dirt on this now-infamous tattoo. Just to complicate matters, it turns out that the photo Sheeran posted to his Instagram wasn't even the whole thing, as he still had another session to go before it was completed, but it's done now, and he's finally ready to explain what it's about. And — spoiler alert — it actually has a really cool meaning behind it

Well, this is the thing, a lot of people had a go at me for this, like, "That seems like quite a stupid tattoo." But I played the biggest venue you can play in England and sold out, for three nights, which is Wembley Stadium. And England's national emblem is a lion. So, I want — and all my tattoos are things I've done in my career. And they're all leading to the middle of it, which is the lion and that's the stadium. And I feel like this is every part of my career put into one.

How great is that? I'm so used to people getting tattoos for no reason at all, so it's super refreshing that Sheeran not only endowed his art with such immense meaning, but is willing to share that meaning with all of us. As if I wasn't impressed enough that his TV appearance was for someone else, the respect just keeps piling on. But in case you thought Sheeran was at all concerned about how you or I or anyone feels about his ink, you can sleep soundly knowing that he doesn't, because he followed up his Wembley explanation with this crucial little tidbit: "And I think it looks cool. I don't really care if anyone else does."

I personally love the tattoo, but what I love more is Sheeran's perspective on the whole thing. I gained so much respect for him from this interview alone — keep up the great work of being your badass self and not caring what anyone else thinks, dude!