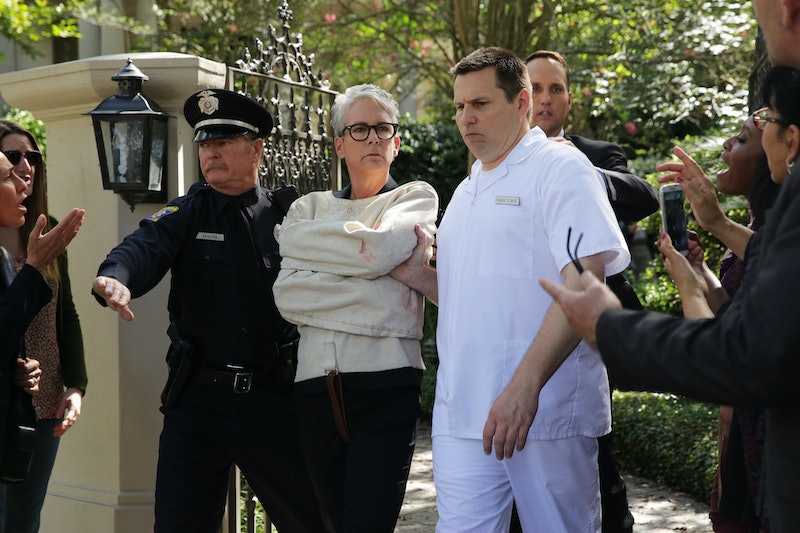 The much-anticipated episode of Scream Queens “Mommie Dearest” airs Tuesday night. The episode trailer teases that the bathtub mother will be named and all signs point to Grace’s mom. In the preview, the scene where Dean Munsch hands Grace a file with the Kappa sister’s name is not-so-subtly juxtaposed with Chanel holding a file that names Grace as the killer. It also shows that Grace no longer trusts her dad. What’s in that file?! Despite all of those intriguing scenes, the most important moment of the trailer is the one that shows Jamie Lee Curtis lathering up for the much-discussed shower scene that is a nod to her mother Janet Leigh's unforgettable role in the Alfred Hitchcock classic Psycho. Of course, that sinister shower won't be the first horror movie reference on Scream Queens.

The shower scene in Psycho was groundbreaking in 1960. The partial nudity and Hershey’s syrup blood shocked audiences. Though decades have passed and movies have matured, the scene is incomparable and still terrifies new audiences more than 50 years later. Jamie Lee Curtis told Variety she has spent her life avoiding the shower. No, not in real life, but on screen.

My entire life I have refused to step into the shower because it belongs to my mother … I have attempted to step out of the shadow of my parents for a long time … It felt like they’re both gone, and enough time has passed … This role has appeared in my life. It’s unexpected and delightful.

But the shower scene isn’t the only reference we’ve seen on Scream Queens. Ryan Murphy has been teasing us with horror movie allusions all season long. Have you been catching them?

Before Lea, Emma, Keke, and Billie, Curtis was the original Scream Queen, receiving the nickname after her work in the Halloween films and other horror movies. That means the very title of Scream Queens, as well as the casting of Curtis in a lead role, is a nod to scary movie history.

In "Pumpkin Patch" Zayday is kidnapped and forced into a pit, where she is given lotion and other goods in a bucket by a psycho with a white fluffy dog. This is a spot-on homage to Silence of the Lambs.

3. Dean Munsch In The Mental Institution

The "Beware of Young Girls"episode is loaded with Silence of the Lambs references. From the straight jacket, to the cell, to Dean Munsch straight-up quoting the film and telling Grace, "Quid pro guo, Clarice."

For some reason, building a replica from one of the scariest movies ever while a serial killer is on the loose seemed like a good idea to Chanel. But, whatever, the Kappas' maze made for an excellent reference to The Shining.

Dodger's dead frozen body in the same maze also looks a lot like Jack Torrance's body in The Shining.

Which brings us to the death of Roger. The nails are reminiscent of Hellraiser.

6. All Of The Chainsaws

Grace's dad plays Texas Chainsaw Massacre in his film class, in case chainsaws being the weapon of choice for the campus killer wasn't enough of a reference to the movie.

The heads poking out the grass/lawnmower scene in Scream Queens' first episode seems to be inspired by the croquet scene in Heathers — the stylized, mean girl look is also likely an homage to the film.

When Feather, played by Tavi Gevinson, first popped on the screen in "Beware of Young Girls," my first thought was that she looked just like Mia Farrow circa Rosemary's Baby. But, the reference to Farrow doesn't end there. According to E! Online, there was another reference to Farrow behind the episode, as the song you hear at the end of the episode is the original title "Beware of Young Girls," written by Dory Previn while in a psychiatric hospital following her husband's affair with a younger woman: Mia Farrow.

OK, maybe this isn't a horror flick, but Scream Queens definitely had some fun with the fact that Emma Roberts once played Nancy Drew in a squeaky clean kids movie.

If Scream Queens managed to pack these references into its seven episodes so far, I'm sure we have many more homages to look forward to throughout the rest of the season — and the Psycho shower scene is at the top of the list.

More like this
Michael & Kathleen Peterson’s House From ‘The Staircase’ Has New Owners
By Kadin Burnett and Kayla Blanton
What’s New On Netflix: A Victoria Justice Rom-Com & The Return Of David Letterman
By Arya Roshanian
'Doctor Who’s New Star Is Already Huge On TikTok
By Maxine Harrison
How Ncuti Gatwa's 'Doctor Who' Casting Impacts His 'Sex Education' Future
By Nola Ojomu
Get Even More From Bustle — Sign Up For The Newsletter