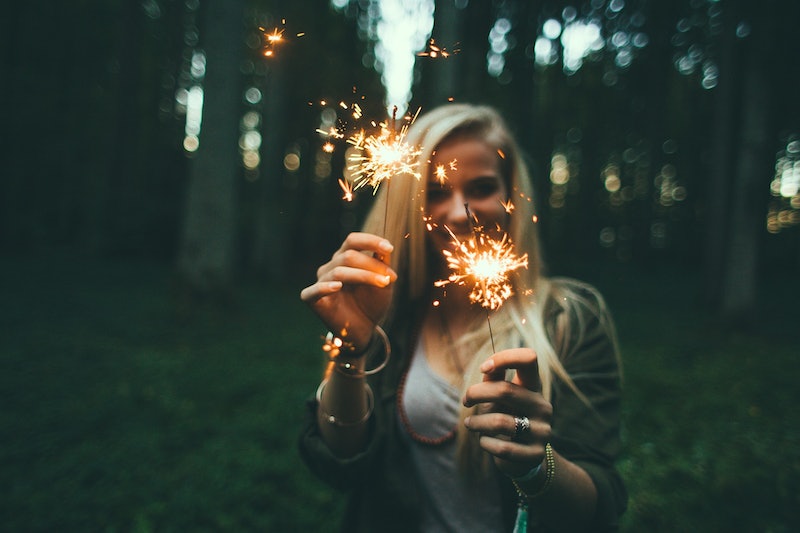 A lot of the advice you get as single person is pretty annoying. From ‘you’ll just know when it happens to ‘you’ll meet your partner when you least expect it’—people generally mean well, but there is no magic cure, solution or answer to why some of us are single for longer and some of us find love when we go on one Tinder date. And if you are looking to get out of singlehood, though it might feel like the odds are stacked against you if you’re looking for love and haven't found it yet, there is some logic and science behind being happy in the moment.

And well, even if you’d rather it not be the case, if your present Facebook status is ‘single’ — it's important to find ways to actually be content with it. Some folks might relish the independence and savor the fact they don’t have to share a bed, weekend plans, or holiday travel with another person, but others who prefer the company of a plus one might find it a little difficult to fly solo without an end in sight. For the latter group, seeking that feeling of blissful-everything-is-awesome-now-that-I-have-love is dangerous territory because you’re depending too much on someone else to give that to you.

“Finding a relationship will not make you happy. It will simply distract you,” says dating coach Renee Suzanne. “True happiness and love can only be found within. Once you really understand this and find this love within yourself, you’ll be in a much better place to have healthy relationships. We often look to other people to fix the parts of ourselves and our lives that feel broken, but they can’t do this. It is our responsibility to come to a place of wholeness and joy ourselves.”

So how do you, um, do that? Here are some tips from dating experts on how to find the zen in dating when you just want it to be over already:

This might feel a little strange at first, but Suzanne says getting off your phone and into your life and your surroundings will help you escape from the negative tunnel vision that might be clouding your happiness. “They don’t have to be people you want to date, but the act of greeting someone helps you practice being friendly,” she says. This may give you more joy because you’re putting yourself out there instead of harping on the fact that you’re single and nothing is working out. Meeting new people — who you could be with as friends, future partners, or just a one-time ‘hello’ — helps you see just how many good folks are out there in the world.

Even if you feel like you’re miserable alllll the time and just want a partner already because it’s been forever (and ever) — if you really think about it, there are likely things you love about being single. Consider it: you can go to bed and wake up whenever you want, your finances are your own, you see your friends all the time, you likely don’t argue with people over the dishwasher and you don’t have to clean up someone else’s stuff or nag them about it. Right? “Determine when you tend to feel the most unhappy about your single status. If it’s on nights or weekends, then find a new outlet, hobby, group or volunteer activity that makes you feel purposeful,” says life coach and author, Sarah E. Stewart, MSW, CPC. “When humans feel needed and that they have a purpose in their life, their feelings of happiness tend to increase.”

Though you already know this if you’re single (because your coupled-up friends have reminded you a million times) — when you’re on your own, your money, your decisions and your schedule is all up to you and only you. Though you may be envious of your friends’ romantic getaways with their partners, they’re likely jealous that you can move somewhere on a whim or book a trip because you want to without considering anyone else. Even if it’s just a weekend getaway or a big trip to Australia, author Rebecca West says making a choice to travel by yourself is a good one and one that could make you more adventurous while you’re single and once you’re in a relationship. “It’s your moment to leap into a new life adventure, without having to convince anyone else it’s a good idea,” West says.

4. Stop Comparing Yourself To Your Friends

OK, so you have how many weddings, engagement parties, baby showers, and bachelorette trips next year… and you’re, um, going alone to all of them. Though it might feel a little infuriating, frustrating and OK, lonely, if you compare your life stage to your friends’, you’ll always feel inferior. Instead, Stewart says to turn it into a social experiment to see what you can learn from your friends in relationships. “Observe them! Relationships are not always rosy. Watch and note to yourself traits and characteristics of relationship that you would like to adopt in the future, and ones you definitely want to avoid,” she says.

While couples sometimes get an open forum to vent about hard it is to be in a relationship, when a single person to complains, they’re often told: “It’ll work out! It’s just temporary.” But the truth is, sometimes it is really hard to be single. It’s OK to not be OK, and to admit that to people who ask, says Stewart. “You’re sent a message as a single person that single life is fabulous, so you better be fabulous. The reality is, yes, sometimes being single is fun, sexy and exciting,” Stewart says. “However, if is your third straight weekend alone with nothing to do, it’s not so great.”

The key here isn’t just to admit that you don’t always like being single but also acknowledge that emotions come and go, and if you spend time only thinking about the Debby Downer times, you lose the ability to see the possibilities around you.