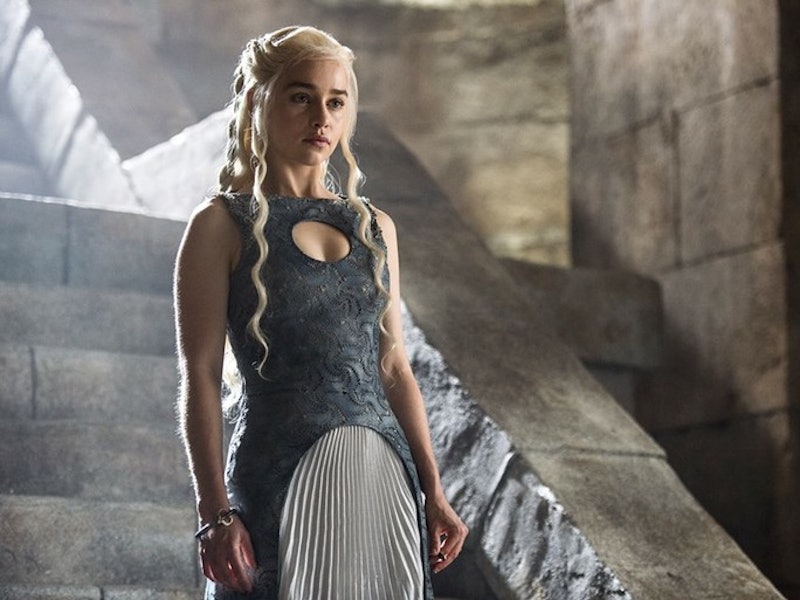 Game Of Thrones is notorious for being one of the most hush-hush shows on TV, which is why so many fans release videos from lurking around the filming locations to help others guess what might be going on in Season 6. And, this time, there's been a leak of the Game of Thrones script from the inside... but don't get too excited, people. There's (next to) nothing to see here. New Game Of Thrones cast member French actor Elie Hadded Instagrammed (and deleted almost immediately, but not before fans got a screencap of) a photo of his iPad with one of the Season 6 scripts up on it.

Sadly for the ravenous fans examining all they can, the photo reveals... just about nothing. Haddad posted the photo last week, and fans from the site Watchers On The Wall seized it, zoomed in on it, cropped it, and were able to suss out some dialogue. Haddad is playing a Dothraki warrior on the upcoming season, and it seems like the Dothraki will be making some lewd comments about Khaleesi:

The page contains comments such as “I like her,” and “I’ll bet she gets nice and pink when you pinch her.” It looks like the word "khal" is on the page as well in a non-dialogue section.

One Dothraki man says, “I’d like to know what a khaleesi tastes like,” and another responds crassly, “Good. You can suck my d*ck.” And then they have a good laugh about it.

Haha, well that's... disgusting! But recall that, at the end of Season 5, Khaleesi is taken by the khalasar, so can anyone really be surprised that they are making such crass, objectifying comments about Daenerys? I mean, Khal Drogo was charming in his own way, but, lest we forget, he literally bought Khaleesi from her brother.

So, calm down, fans. There's not much new information here, except maybe the confirmation that Game Of Thrones will still contain characters making uncomfortably misogynist at comments at several points during Season 6. Between Sansa Stark's rape scene and Cersei Lannister's horrifying walk of shame which lasted for more than three full minutes on screen, Season 5 really was a particularly dark time for the women in Westeros. Hopefully, Season 6 will tone it down some, but, from the looks of this script page, there are still plenty of rude characters wandering around in the absence of good men like Jon Snow.