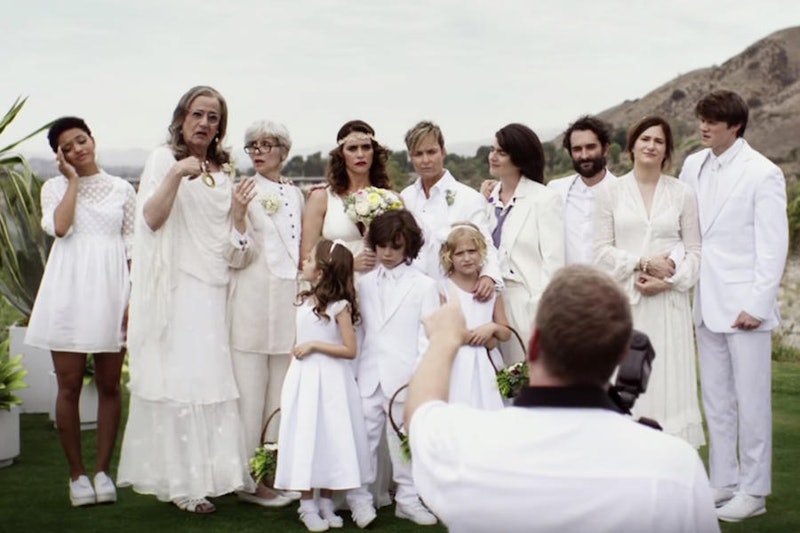 It's been over a year since Season 1 of Transparent premiered, and finally, Moppa has come back to us. Amazon released the first trailer for Season 2 of Transparent on Twitter Tuesday, and it has a lot going on.

When we last saw the Pfeffermans, it was at their stepfather's shiva, and it was quite the drama-filled evening. Sarah and Tammy decided to get married, Ali argued with just about every other character on the show, and Josh fought with his rabbi girlfriend, Raquel... and then proceeded to find out he had a teenage son he never knew about.

Since it debuted on Amazon Prime last fall, Transparent has racked up awards at both the Golden Globes and Emmys — all of which were so, so deserved. Not much has been announced about the show's next season, but, according to Entertainment Weekly, it will reportedly not revolve as heavily around Maura. Additionally, Anjelica Huston and Cherry Jones are set to guest star. Luckily, this new trailer did answer a lot of lingering questions from Season 1.

So, let's take a look at what we've learned:

1. Sarah And Tammy Are Really Getting Married

At the end of last season, Sarah and Tammy got engaged, shortly after she hooked up with her ex-husband in the laundry room at her stepdad's shiva. Hey, no one's perfect, right? The trailer shows the entire family at Sarah and Tammy's wedding, so I guess they're really getting hitched. Mazel Tov to the happy couple!

2. Josh And Raquel Are Still Together

Josh and Raquel had a huge fight during the season finale. Ali, who was irritated with her brother, let it slip to Raquel that Josh had been a bit of a womanizer in the past and Raquel was not too pleased. They shouted a bit, and she left Ed's shiva. But, by the looks of the Season 2 trailer, the two lovebirds have moved passed the incident and are (hopefully) doing just fine.

3. The Pfefferman Women Can Rock A Pant Suit

Look at Shelly and Ali! The mother and sister of the bride are wearing that menswear like it's nobody's business.

In the final minutes of Season 1, Josh found out that he fathered a child as a teen and that his son had come to find him. It was a tad unclear what role they would play in each other's lives, but it looks like Josh is taking fatherhood seriously.

In the first season, Maura and her ex-wife Shelly had a bit of a rocky relationship. As the season progressed, though, we got to see the two develop a really sweet friendship and come to a new place of understanding. While it's just hinted at in the trailer, it looks that friendship is going to continue to grow in Season 2.

When the wedding photographer calls Maura "sir,"she and Shelly are understandably offended and decide they're done with pictures for the day. Don't mess with Maura. She is not having anyone's heteronormative nonsense.

Season 2 will premiere on Amazon on December 11.