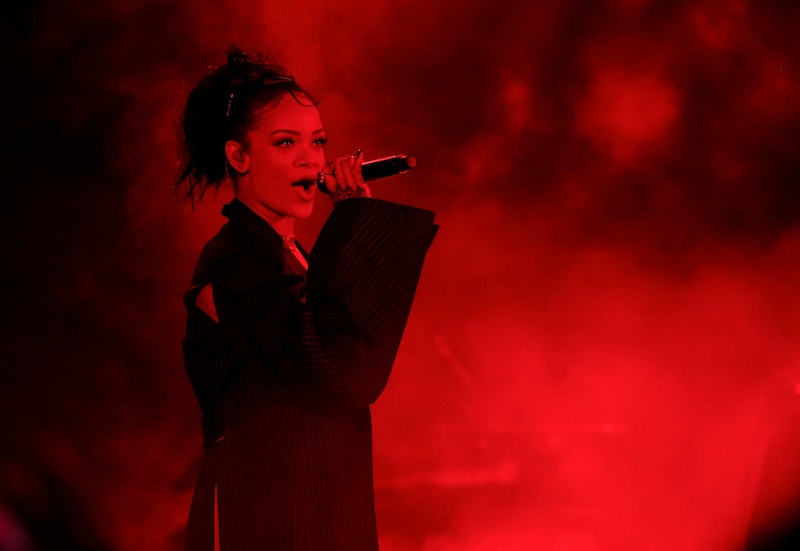 As we approach the end of 2015, DJs and producers all over the globe are preparing to release their hotly anticipated end-of-the-year mashups. On Tuesday, Daniel Kim's 2015 Pop Danthology mashup hit the Web, only this time around, there's a catch: there are two different 2015 Pop Danthologies! Kim explained his decision to split this year's installment into two pieces on his website:

For the first time, I am releasing two Danthologies at once. With music from all over the world becoming more and more accessible, it has become increasingly more challenging to satisfy my fans and fit in all of their many favourite songs in my year-end mashup. I found myself cutting down so much of the original musical pieces just to "jam" in as many songs as I could. Not only was the work process not as enjoyable this way but the resulting sound was more choppy. Although making two Danthologies took a lot more time ... I enjoyed the work much more and I feel like each Danthology has much better flow than Danthologies from previous years.

Kim has really outdone himself this year: Part 1 of the 2015 Pop Danthology is four-minutes-long and features a whopping 45 songs, and Part 2 is five-minutes-long and features an impressive 37 songs. Whoa. He does not mess around! Below is a song list for Daniel Kim's 2015 Pop Danthology (both parts). The songs are ranked in order of bop-ability, because, let's face it: 2015 brought us a lot of great bops! Here we go...

Did Stevie Wonder really agree to this? The investigation at 10.

I just don't like it when EDM songs sound evil, you know? "Buoy" is too dark-sided for me.

"SummerThing" sounds dated and unimaginative to my ears, but to each her own.

Not a huge fan.

The song that inspired countless Vines. The beat is pretty bop-able.

I don't really care for the vocal effect used in "Together," but it's definitely danceable.

I think John Bellion sounds really, really supremely creepy singing the first verse of "Beautiful Now." Aside from that, it's an OK track.

It's your standard Pitbull tune... nothing more, nothing less.

It's your standard Flo Rida tune... nothing more, nothing less.

I've heard "Want to Want Me" way too many times now, but it's still a slick pop song.

I don't want to like it, but the break is a lot of (for lack of a better word) fun.

Yeah, it'll get stuck in your head instantly.

Well, "I'm an Albatraoz" is certainly... different! It's got moxie. I like that.

"Downtown" has grown on me quite a bit. The chorus (when it finally arrives) is massive.

I just recently threw a big tantrum about how there's too much whistling in pop music these days... "Sparks" somehow pulls it off, though.

Who knew I would end up liking Justin Bieber's new material so much?

The music video weirds me out, but I do love the song.

It's hardly Kelly Clarkson's best single to date, but it's a cute little ditty (and that pre-chorus is to die for).

"Bitch I'm Madonna" somehow finds its way onto all of my workout playlists.

I turn up the volume every time "Sugar" comes on the radio. Every time! That hook is irresistible.

Again, not a big fan of some of the lyrics, but "Cheerleader" is undeniably infectious.

"Cool" samples one of my fave Kylie Minogue songs ("Get Outta My Way"), so, naturally, I dig it.

Adam Lambert made a triumphant return in 2015, and all feels right with the world.

You need to get into British dance-pop act Years & Years immediately. Trust me, you'll be so glad you did.

I'm not wild about some of the lyrics, but otherwise, "Cool for the Summer" is a major jam.

What can I say? I'm a sucker for a dance ballad.

The track that marked the beginning of the Biebaissance.

Fact: Tove Lo is the Queen of Weirdly Raunchy Pop Tunes. I adore her.

The feels this anthem gives me are indescribable, tbh.

"Run Away With Me" is a modern pop classic. Shame on the American public for paying it DUST!

I may never get over this song. It's so beautiful. *ugly crying*.

(Note: Daniel Kim's "Hoover Swing," "Different Target," and "On My Own" were not included in this ranking because audio for the three tracks does not seem to be available online.)

Also not into it.

"See You Again" is a very sweet song... but I never want to hear it again. Ever.

I actually like this remix better than the original.

The instrumental is (unsurprisingly) very cool.

"Pretty Girls" was cute for a minute, but it got old really fast.

Kendrick Lamar takes this tune to the next level.

That chorus is just something else.

Again, I don't want to like this, but the beat is very bop-worthy.

"Fight Song" is overplayed now, but it still makes my spirit soar.

"BBHMM" took a little while to grow on me, but I'm fully on board with it now.

It's not as great as "Good for You," but it's still pretty great.

The Weeknd serves up major MJ vibes in "Can't Feel My Face."

"Bitch I'm Madonna" is my song.

"Doing It" is seriously underrated.

Just as I was starting to get bored with Calvin Harris, he drops "How Deep Is Your Love." This track is fire.

We meet again, "Love Me Like You Do." You're still beautiful.

"Style" is hands down Taylor Swift's finest work to date.

I'll probably never get over this song, either. *uglier crying*.