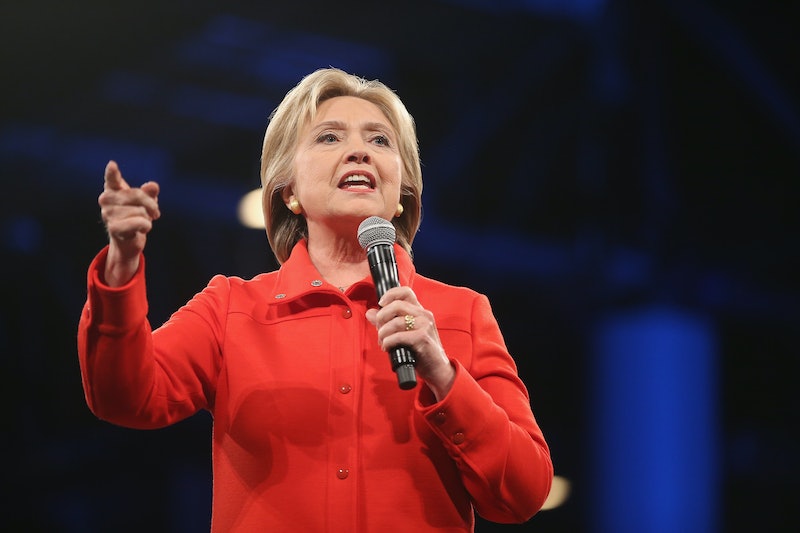 Hillary Clinton may not be invited to the GOP debates (which is probably for the best since she's been the most attacked person at each one), but that doesn't stop her from following along and commenting on her rivals' statements. From criticizing the Republicans' lack of feminist ideals to advancing her own stance on immigration, Clinton uses the GOP debates as an opportunity to highlight how she differs from the Republicans, and Tuesday's debate was no different. Clinton's tweets about the fourth GOP debate highlighted what the Republicans neglected to mention.

Clinton's campaign is very social media savvy this time around, which comes in handy when live-tweeting debates. I like to picture Clinton sitting on her couch, watching the GOP debates with a glass of wine in hand, and giggling to herself as she makes obvious digs at her opponents for the world to read. Of course, the Republican candidates never fail to give her plenty of good material, and Clinton's team took full advantage during the fourth GOP debate, which focused on taxes, jobs, the overall economy, and international issues (one of Clinton's specialties). Live-tweeting the rivals' debate was really just a warm up for the Democratic debate coming up on Saturday.

Clinton was mentioned 18 times in the earlier JV debate alone (13 of which were from Chris Christie), but she didn't chime in on anything specific until the primetime event except to say: "Republicans have it wrong on many issues facing Americans this election."

As the top eight Republican candidates duked it out on stage in Milwaukee, Clinton tweeted away.

On Cleaning Up Messes

Clinton's thumbs must be tired from all that tweeting.