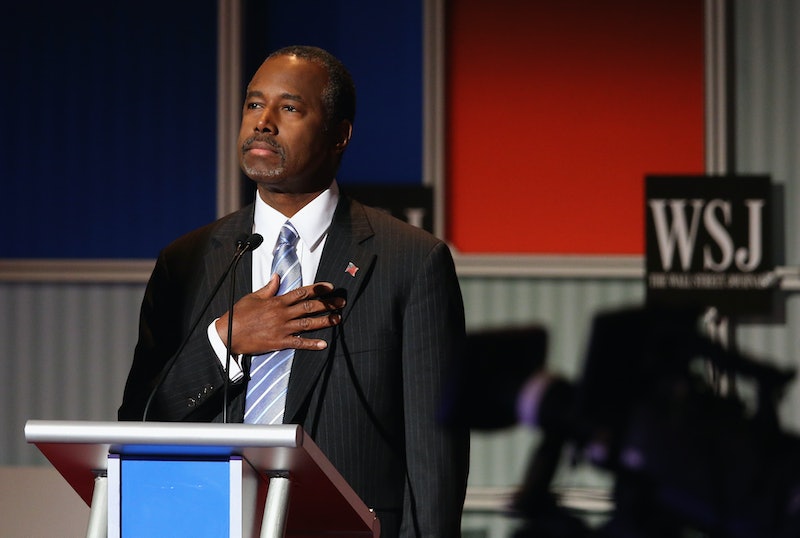 It hasn't been the easiest of weeks for retired neurosurgeon Ben Carson. A political novice who's vaulted into a virtual tie for the lead in Republican presidential primary polls, he's been dogged recently by some pretty worrying accusations — there are inconsistencies and apparent falsehoods in his rich biography. It's a bizarre story, considering how impressive and accomplished Carson's life is without any embellishment. And it made one part of Tuesday night's GOP debate all the more awkward: Carson called Hillary Clinton a liar over Benghazi, all while angrily blaming his own troubles on a dishonest liberal media.

Carson's been beset by these sorts of suspicions and inconsistencies for a couple weeks now. For instance, he claimed that he tried to stab a friend (or a close relative) when he was a child, but failed when the knife broke. And that he was offered a full-ride scholarship at West Point before deciding to attend Yale. And in his 1990 biography, Gifted Hands, he said that he was awarded $10 for honesty after diligently completing a grueling hoax test for a college course called "Perceptions 301." Some details of this story appear to be corroborated by a 1970 prank in the university's satirical newspaper, The Yale Record.

Here's how Carson played off moderator Neil Cavuto's question about the controversy:

First of all, thanks for not asking me what I said in the tenth grade ... I have no problem with being vetted. What I do have a problem with is being lied about, and then putting that out there as truth. I don't even mind that so much if they do it with everybody, like people on the other side. But when I look at somebody like Hillary Clinton, who sits there and tells her daughter and a government official that this was a terrorist attack, and then tells everybody else that it was a video, where I come from I call that a lie. I think that's very different from somebody misinterpreting when I said that I was offered a scholarship from West Point ... people who know me know I'm an honest person.

For the record, as The Washington Post details, Clinton maintained in testimony that any changes in how she described the attack's origins were the result of rapidly changing, chaotic, and uncertain circumstances. And needless to say, Carson doesn't exactly seem like the ideal messenger for this line of attack. Frankly, it was delivered much more forcefully and confidently by Marco Rubio in the third GOP debate.