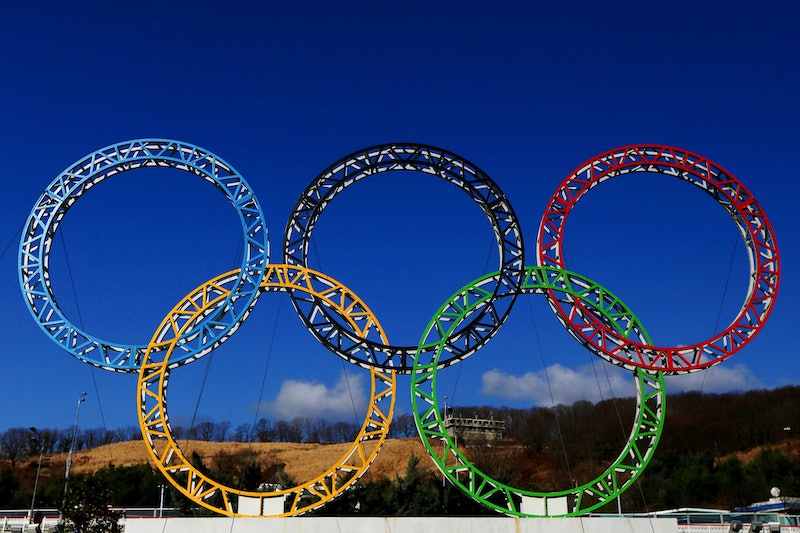 When it comes to spectacle, the Olympic Games are in a class of their own. The Games are full of dazzling theatrics, heart-racing drama, and awe-inspiring athletic ability — but they're also an inherently bizarre affair, with countries that normally hate each other coming together to compete in arbitrary (and often goofy) sporting events. With so many countries competing in so many events in such a short period of time, it's inevitable that the Olympics, in addition to offering a first-class display of talent, can produce moments of first-class awkwardness. Here's our guide to the six most awkward Olympic moments in the otherwise-glamorous history of the Games...

Australian speed skater Steven Bradbury knew he didn’t have a chance. He was significantly older than his competition, and during the quarter-finals he was pitted against two of the strongest speed skaters in the games. Only the top two skaters would advance to the semis; Bradbury came in third, and assumed that was the end of it. But after the race, one of the winners was disqualified on a technicality, and Bradbury advanced to the semis by default.

During the semi-finals, Bradbury was in last place when suddenly, three of the skaters in front of him collided with each other. This allowed him to eek out a second-place victory and qualify for the finals. An incredible streak of luck, but surely it wouldn’t hold — right?

Wrong. Soon after the final race began, Bradbury was once again in dead last, trailing everyone else by about 15 meters, when the exact same thing happened — his competition crashed into itself and went careening toward the wall. But this time, the fumble happened during the final lap, and involved every single one of the other skaters. Bradbury, who admitted subsequently that he was the weakest skater of the group, cruised into first place and walked home with the gold medal.

The London Games aroused outrage before they even began, thanks to the official logo, an inexplicably hideous eyesore that managed to offend just about everybody.

In the words of the Guardian’s Harrison Mooney:

The London Games is looking ugly, and I mean that literally. It started early, with the unveiling of that painful logo, the colour scheme for which appears inspired by a Nike catalogue. It resembles either Lisa Simpson performing a sex act or a child's illustration of the breakup of Pangaea. Granted, a long look eventually yields an Easter egg – a "2012" hidden amid the horror – but, like an eclipse, it's hard to stare at it long enough to appreciate it.

The logo was so garish that an animated version reportedly caused seizures in viewers with epilepsy, prompting organizers to remove it from the website. If there’s any upside to that debacle, it’s that every single Olympic font from now on will look a little bit classier compared to the 2012 design.

Thomas Hamilton-Brown was almost as unlucky as Bradbury was lucky. During the 1936 games, the South African boxer was eliminated during the opening round of the lightweight boxing competition. Dejected and discouraged, he proceeded to hang around Berlin and eat away his problems.

Days later, he received some good news: There had been a scoring error, and he’d actually won the match! Unfortunately, he’d eaten so much over the last couple of days that he was now five pounds heavier, and thus no longer qualified as a lightweight.

The 1988 Olympics hit an awkward note before the event even started, thanks to a boycott by led by neighboring North Korea. This was during the Cold War, and the two Koreas were still officially at war with one another.* Still, South Korea tried to get the games off to a hopeful start by releasing a flock of doves during the opening ceremony, the intention being to symbolize world peace.

Unfortunately, the result was anything but peaceful. Due to some breathtakingly inept choreography, the doves were set to be released from an enormous structure that also served as an oversized Olympics torch, but the execution was off, and so rather than flying peacefully into the skies above, the doves were incinerated on live television. The audience apparently couldn’t tell what had happened, as they greeted the slaughter with gleeful, blissfully ignorant applause.

Live doves have only been used in one opening ceremony since then. Which, if you ask us, is one time too many.

By any measure, the men’s marathon in the 1904 games was a farce. The course was a dusty road with seven hills that traversed busy city thoroughfares. This meant the runners had to dodge cross-town traffic, pedestrians walking dogs, and delivery wagons during the race. There were only two water sources, and officials decided to hold it in the middle of the day, when it was 90 degrees outside.

The contestants were an odd bunch. They included ten Greek participants who hadn’t run in a marathon before, two tribal South Africans who showed up to the race barefoot, and a Cuban runner who arrived in wearing a long-sleeved shirt and pants, as he’d lost all of his money in a dice game prior to the event and couldn’t afford a uniform.

The race itself was, unsurprisingly, a complete mess. One contestant was chased a mile off course by a pack of wild dogs. Several others collapsed in coughing fits when their coaches decided to drive in front of the runners, kicking up massive amounts of dust. This caused one contestant to be hospitalized; another started vomiting uncontrollably and quit the race.

The Cuban runner stopped midway to snack on some apples from an orchid, but the apples were rotten, so took a roadside nap in an attempt to sleep off the pain. Fred Lorz, an American contestant, quit the race midway due to stomach cramps and hitched a ride home with his manager; when his manager’s car broke down, he hopped out and finished the race, coming in first.

Lorz's deceit was quickly discovered, and the gold medal was instead awarded to Thomas Hicks, who’d begun hallucinating halfway through the course and had to be carried over the finish line by his trainers.

If not the most dignified race in Olympic history, it was most certainly one of the most dangerous.

The Olympics have the unique ability to highlight geopolitical rivalries in a decidedly non-political setting. In the 2012 London Games, the soccer match between North Korea and Columbia was delayed for over an hour when, due to a technical error, the stadium’s oversized screen mistakenly displayed a picture of the South Korean flag next to the North Korean players. This outraged the North Korean team, and its members refused to start the game until the organizing committee apologized profusely and assured them it was a mistake.

In South Korea, the event was reported as a novelty bit of offbeat news. In North Korea, it wasn’t reported at all.