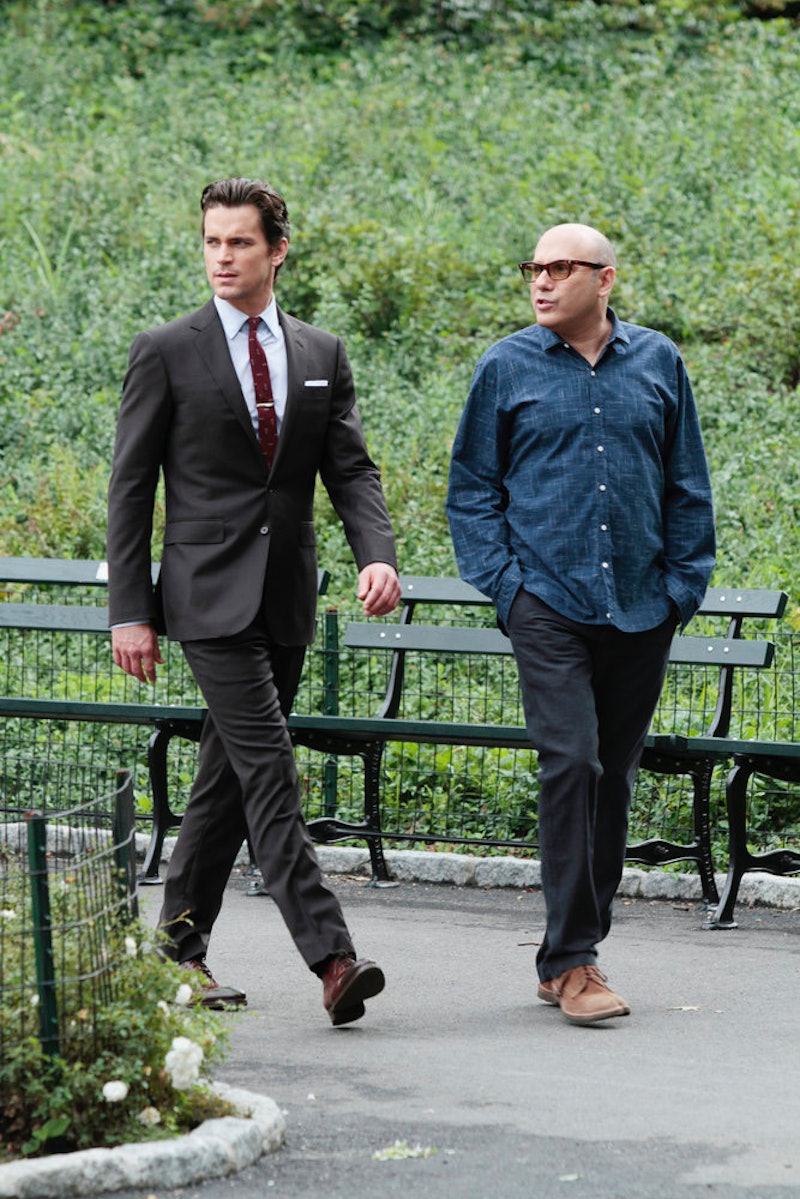 USA's White Collar returned from its hiatus Thursday night, and it dove right back into the thick of things. Neal Caffrey's arrangement with Curtis Hagan and his feud with handler and ex-BFF, FBI Agent Peter Burke, both came to a head and the show threw its audience a serious (but kind of anticipated) curveball. Neal's new love interest is up to something and she may or may not be the most dangerous case the ex-white collar criminal and his FBI agent BFF have ever dealt with — because, this time, the case is about them.

We've always been kind of skeptical and cautious about Neal's redheaded paramour Rebecca. She was all too available, all too eager, and all too forgiving when it came to Neal and being involved with his interpreting of the Mosconi Codex. And, on Thursday night, White Collar confirmed our suspicions about the timid history buff: She's been running a huge game on Neal, Burke, the entire White Collar Division, and criminal mastermind Hagan. All of that from a tiny apartment in Brooklyn filled with file cabinets and creepy selfies of her wearing different wigs.

The episode centered on Neal fulfilling his final task for Hagan: Decoding the Codex to save Rebecca, who he believed to be held hostage by Hagan. But LOL, just kidding, because Rebecca was actually just pretending, actually sitting in her own apartment. What the hell? Neal, in a moment of bravery, convinces Hagan to "release" Rebecca and then torches the decoded pages of the Codex (not before Mozzie encrypts them into his photographic memory, of course) and Hagan is subsequently captured by the FBI.

Then things got really interesting. In a strange moment, Hagan tells Burke that he's got something he'll want to see at his apartment, and, on the way there, he tells Burke and Neal "to beg for their freedom." Of course, Neal and Burke had absolutely no idea about what the hell he was talking about and before they can ask, Hagan gets shot by a sniper. We're actually not even kidding — someone shot Hagan and down he went before our favorite, crime-solving BFFs could get any answers.

And so we're back to our questions about Rebecca. Neal and Burke found her apartment through a receipt in Hagan's wallet and a business card found on the now-deceased Agent Seigel. But seriously, who the hell is she? Here's the three things we want to know following Thursday's episode:

1) Did she shoot Hagan and Seigel?

For a show that isn't usually so violent, White Collar has delivered a surprising two shootings this season so far. And now that we know the truth about Rebecca, she could have been holding the gun both times. Seigel obviously knew something that Neal and Burke didn't, and that's why he was hanging around her neighborhood when he was gunned down. Hagan obviously knew something too — at least, he definitely knew that she actually wasn't being held hostage. Was he working for her and planning on outing her to make a deal with Burke and the FBI for his freedom? All signs are pointing towards Rebecca being the shooter in both scenarios, but we want to know for sure.

2) Why is she targeting Neal, Burke, and the White Collar Division?

Really, why? And why has she been taking such painstakingly detailed accounts of every person's daily movements for the past year? She's obviously not working alone, but she's working for something that's definitely not apparent — unless it has something to do with Burke getting out of prison based on Neal's fake confession. Is she trying to expose corruption in the division? What's this girl's motive? Because even though we predicted the twist, we have not a clue as to why she'd be doing this.

She's been doing some serious surveillance that definitely costs some serious cash and that money has to be coming from somewhere. Is she doing an investigation for National Security? Or is she just such a criminal genius that she feels confident enough about bringing down an entire division of the FBI with careful patience, manipulation, and painstakingly detailed notes? There has to be something big-picture here. Otherwise, those file cabinets would make no sense.

All we know for sure is that Burke and Neal look scared. The promo for next week's episode naturally employed the tagline "the hunters have become the hunted," and it's really the truth. Rebecca's been hunting them, slowly and cautiously like a truly deadly predator and it's scary as hell. Especially now that she's under Neal's skin.