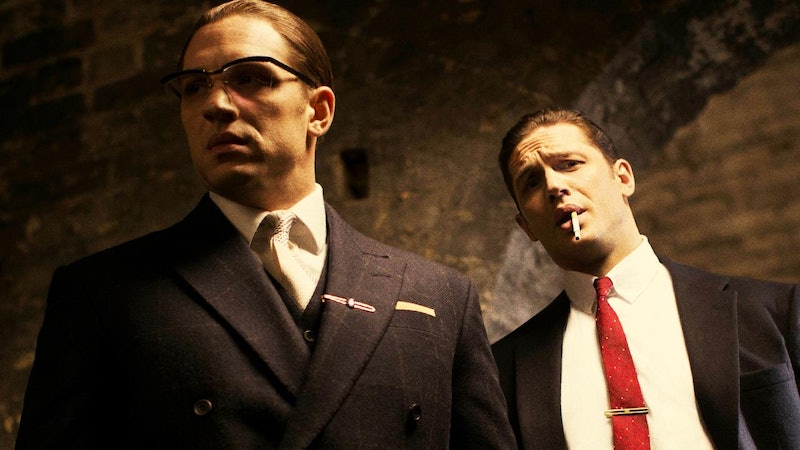 When you watch Legend, the British gangster biopic that opens in theaters Nov. 20 and follows the deadly rise and fall of the infamous Kray brothers, you'll be seeing double. In Legend , Tom Hardy stars as both Krays, twins Reginald (Reggie) and Ronald (Ronnie). It's a rather interesting casting choice, especially when compared to The Krays, the 1990 film directed by Peter Medak which also tackled the strange, violent life and times of the real-life brothers who were heavily involved in the organized criminal world of London's East End during the 1950s and 1960s. In the '90s version, the Krays were portrayed by two different actors who happened to be brothers in real life — Gary Kemp and Martin Kemp.

So you would think that with Legend, we'd get a similar situation — if not brothers, at least two actors who look alike just enough to pull off #twinning goals. But Tom Hardy was a special case. In an interview with Yahoo Movies, the writer-director of Legend, Brian Helgeland (who won the Oscar for Best Adapted Screenplay for the 1997 neo-noir crime film L.A.Confidential) dished on just how Hardy snagged the role of both twins and how he managed to pull it off.

Hardy was able to convince Helgeland to let him play the role of both Kray brothers after just one dinner (so we can probably guess Hardy's persuasive powers are out of this world — please sign me up for that master class!); Helgeland described his thought process about Hardy's involvement to Yahoo:

"My initial instinct was to get two guys to play the brothers. Reggie’s the lead. I knew I had to cast Reggie first whether same actor or not… Tom was on the top of the list for Reggie. He read it right away — I was in London at the time — and we had dinner. Casting two guys means you’re tied in to having guys who look similar. I figured I’d try to get Tom for Reggie then worry about someone you’d believe as his twin brother. He was talking about both brothers. He was very familiar with them as most people over there are. And about halfway through dinner as I was listening to him and looking at him, I was starting to think he could pull off playing both. I was also initially worried about that because I didn’t want it to be a gimmick. On one hand it’s exciting but you don’t want it to be swallowed up by that conceit. I thought he could pull it off because he has such a take on both of them."

By the end of the dinner, Hardy said he would be in for playing Reggie if he got to play Ronnie as well — and so, a deal was made which lead to Helgeland's next big question: how in the hell were he and Hardy going to pull this off in a believable manner? Helgeland went on to explain how the apparently CGI-less witchcraft went down.

"He went, from hour to hour, he would be one or the other. There were exceptions, but he usually Reggie during the first part of the day because it was the bigger part. Then many days Ron didn’t work at all."

"But if it was the two of them, Tom and I would rehearse in the morning and he’d read both parts and we’d work out blocking. He’d record Ron’s side of the dialogue, give it to sound guy who’d cut it together in a way he could fit his Reggie dialogue in between his Ron dialogue. Then he’d go off to hair and makeup and come back. He would wear an earpiece that no one could see. We would play Ron in his ear."

3. And A Stuntman, For Super Practical Reasons

"His stunt man was his body double for Reggie and Ron so he could have someone in front of him to look at. Then we’d play back Reggie’s recording in his ear when he was playing Ron."

In a recent interview with the Bristol Post, Hardy said he was "less confident" playing Reggie, the more "straight" brother of the twin duo. "I find straight leads really quite complicated, because they don't do anything. Things happen to them and they respond to the environment. It's quite 'plod, plod, plod' and kinda boring," he said. "It's very easy to play Ronnie because there's an unpredictability to him, so my brain can start to respond in a dramatic environment to that type of mechanism."

I wasn't kidding about the difficulty it took to pull this CGI-less witchcraft off. During a special screening for the film back in August, Hardy described playing the twins as "the hardest thing that I've tried to do in my career." He went on to explain that the team didn't have the means to invest in CGI, so the movie had to be done using split screens and natural shots — good ol' fashion movie tricks. Said Hardy, "Everything is as is. We didn't know what we were fu--ing doing - well I didn't-- and I tried to pretend I did."

Don't be too hard on yourself, Tom; I was pretty much convinced that I was looking at two different actors until I realized that I wasn't, and so ended I up screaming internally for a little while. It kind of goes without saying that he's definitely got my vote for an Oscar.